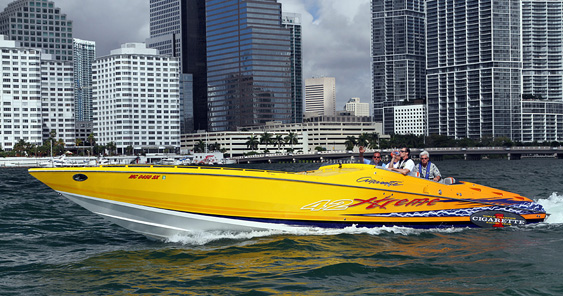 As part of last month’s Miami Boat Show Poker Run, Dave Postill used his Cigarette Racing 42X for the first time since it was repowered with twin Mercury Racing 1350 engines.

Last October I wrote my column (read it here) on an elated Dave Postill, who was looking forward to running his repowered 2007 Cigarette Racing 42X offshore V-bottom at the 2013 Key West Poker Run produced by the Florida Powerboat Club. Although Postill’s boat, which was being outfitted with a pair of turbocharged Mercury Racing 1350 engines by the crew at Chief Performance in Fort Lauderdale, Fla., wasn’t quite finished in time for the run to Key West, Fla., last November, the 42-footer was on hand for last month’s Miami Boat Show Poker Run.

Not only did Postill and four other friends get to showcase his “new” boat at the season-opening poker run a few weeks ago, but the V-bottom was such a head-turner that the club presented it with the Best Engines and Rigging award during Saturday night’s party.

“The poker run turned out excellent and the boat ran outstanding—I have no complaints,” said Postill, who opted to replace the supercharged Mercury Racing 850SCi engines with a pair of Mercury’s QC4v turbocharged offerings—not an easy, or inexpensive, project. “The boat was set up as best as we could get it for the run. John Cosker of Mystic Powerboats did a lot to the boat as far as hull modifications, setup and testing. We had it up to 115 mph and it was super stable even though we didn’t have the best sea conditions for the run. The thing is definitely a dragster now. The drivability is phenomenal and it’s so much quieter now, which is nice.

“Honestly, I hadn’t seen the boat for a better part of two years—I almost forgot what it looked like,” joked Postill, who said the 42-footer should reach 140 mph although he has no intention of running it for top speed. “It’s definitely eye-catching. Everyone was really looking it over at the poker run. I think Tommy (Hofstetter) and the guys at Chief set the bar for the repower. They put a lot into getting everything working just right.” 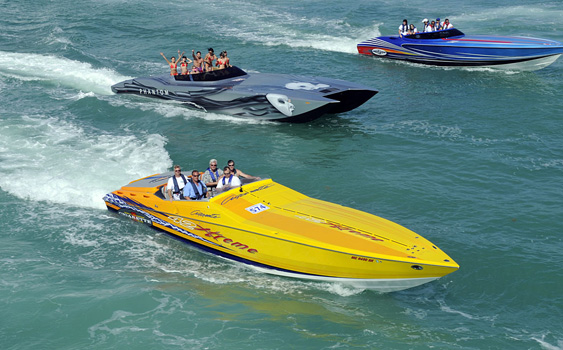 Despite a huge fleet of exotic performance boats in Miami for the Florida Powerboat Club poker run, Postill’s 42-footer still managed to stand out.

Postill said he can’t wait to get more seat time in the 42-footer and that he’s looking forward to running the boat, which Chief Performance outfitted with completely new rigging and bow thrusters, in July’s Boyne Thunder Poker Run in Boyne City, Mich. (Read Matt Trulio’s recent column on the poker run.) 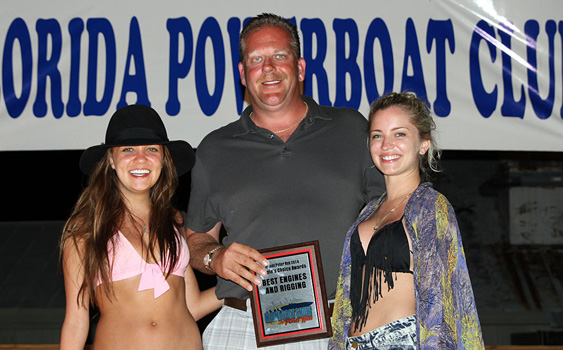 Thanks to the efforts from Chief Performance, Postill (center) was awarded the Best Engines and Rigging at the Miami Boat Show Poker Run.

“I didn’t get the chance to join Dave in the poker run as I was in another customer’s boat, but I know his boat accelerates extremely well,” said Hoftstetter, who started Chief in 1991. “I’ve been in quite a few catamarans with 1350s and they’re not even comparable to his boat with the 1350s. It’s like a motorcycle compared to a car—it’s that different.

“Overall the project was a huge undertaking,” he continued. “Obviously it took a lot of money, but the time, energy and skill that went into the conversion was incredible. This isn’t a project that just anyone could take on; it’s not your normal repower—we’re not talking about bolting in a new V8 here. It’s much easier to build a new boat and install the QC4v platform than it is to repower one like Dave’s. Just going from No. 6 drives to M8 drives presented quite a few challenges. And that doesn’t even count all of the wiring and equipment that needed to be replaced.”

The bottom line for Hofstetter and Postill is that the customer is happy—and from the sound of things after the Miami Boat Show Poker Run, Postill is back to being elated.