You are at:Home»Awesome»Bertram Raceboat Steals The Show In Vintage Weekend

Set in Key Largo, the Ocean Reef Club is a posh, postcard-perfect-planned community in the upper Florida Keys. With a bounty of power yachts and sailboats in private slips, it’s more than a little luxurious. And that makes it perfect for the club’s annual Vintage Weekend, which showcases spectacular classic automobiles and aircraft, that wrapped up a couple of days ago.

That an impeccably restored, 31-foot Bertram raceboat built in 1966 stole the show should surprise no one. The event is held, after all, in the Florida Keys, an area rich—to say the least—in go-fast boating history. But even Miami-based TNT Custom Marine’s John Tomlinson, as big of a name as they come in the high-performance powerboating world, was impressed with the responses from the attendees he took for rides in the classic raceboat called the White Tornado. 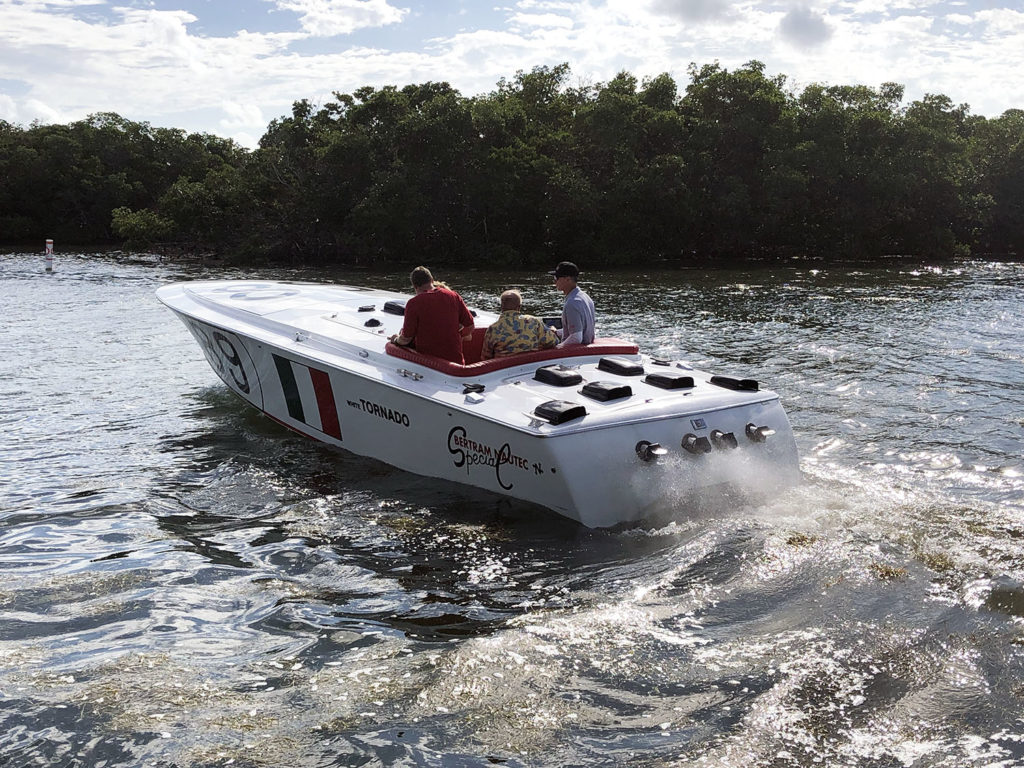 “You take people on a 70-mph ride in this boat and people just go crazy for it,” said Tomlinson. “They think it’s the coolest thing in the world, probably because it’s really loud and windy. They feel like they’re getting ripped out of the boat. They can’t get enough of it.”

As part of its extensive restoration completed a few years ago, the boat was repowered with twin Mercury Racing 520 engines. With that power package it tops out at 77 mph.

For the owner of the White Tornado, a South Florida resident who prefers to keep his name out of the news, bringing his classic raceboat to the event has a higher purpose. He wants to change hearts and minds.

“Just exposing people to these old raceboats in a positive way is a good thing,” he said. “Offshore raceboats and even pleasure boats have always had such a bad reputation with certain groups, like the yachting and sailing crowds. They turn up their noses when they see one. But when they come off the White Tornado, they have big smiles on their faces. They’re like, ‘Hey guys, these are cool boats.’”

In January, Tomlinson will get a chance to run the White Tornado again at the Ocean Reef Club—last weekend was his third time piloting the boat at the event—for a group of visiting members for the New York Yacht Club. He’s even looking forward to it.

“People really do get a kick out of it,” he said. “And that’s fun to see when they’re standing in the bolster next to me with these big smiles on their faces. They eat it up.”