You are at:Home»Awesome»DCB Eyes The Future

Being a Northern California-based reporter covering a predominantly East Coast and Midwest market, I’ve come to know who is and isn’t awake in the wee hours of my own time zone. I know, for example, that I can ring Jeff Johnston, the president of DCB Performance Boats of El Cajon, about 500 miles south of my place in Belmont, at 6 a.m. and he’ll pick up the phone. And that’s exactly what I did yesterday morning.

OK, I confess. I meant to call Johnston, a longtime friend and fellow Powerboat magazine alumnus, at 6 a.m., just as I had promised and failed to do a week ago. But writing captions for the Racing section of the upcoming 2018 Speed On The Water Year In Review print magazine consumed and distracted me so I ended up calling him a couple of hours later.

No matter. Johnston was ready to talk. 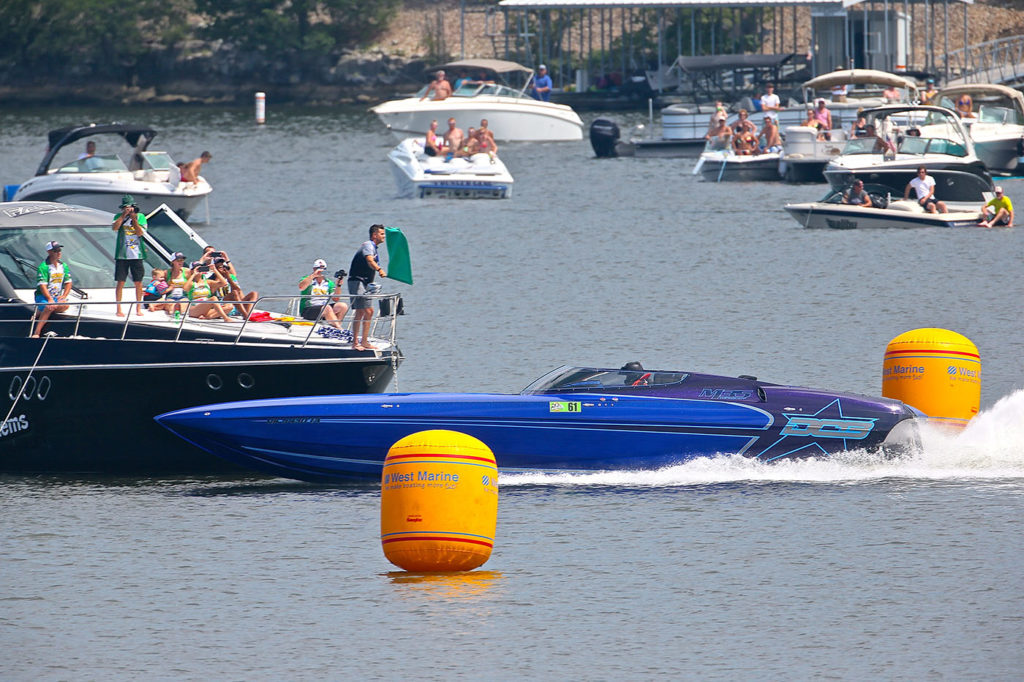 With highlights that included a 168-mph Lake of the Ozarks Shootout performance, it’s been another amazing year for the team at DCB Performance Boats. Photo by Pete Boden/Shoot 2 Thrill Pix.

“You know, it’s been a great year at DCB and we’re going to finish strong,” he said. “We’ve had a lot of good builds this year and we introduced new models. The M33R sport catamaran—thank goodness we built that boat—has led our outboard engine-powered boat sales this year. It’s been great. And our stern-drive boat builds have been nicely spread out between the M31 and the M35, plus we built a couple of M44s. The guys who like to hear the big-block ‘roar and rumble’ definitely are still out there.”

Johnson paused for a moment, then added, “But we can’t just sit back on our heels.”

That caught my attention. Anytime a boat builder tells you he’s not sitting back on his heels, it means he’s thinking about new models. On that subject, however, Johnston was relentlessly vague.

“We are going to add two new models in the next 18 months,” he said. “They will be models you’ve never seen before from the camp at DCB. That much I can tell you.”

Of course, I threw out a couple of guesses but Johnston wasn’t biting. He just laughed and told me I’d have to wait. Speculation isn’t a luxury I have, at least as a reporter, so I switched gears and asked him what he thought the future might hold for the outboard-boat market.

“It’s definitely here to say but I think the outboard boat sales will level out,” he said. “In the last 24 months, that segment has skyrocketed. Of the 15 boats we built this year, half of them were with outboards. Four years ago, we built one outboard boat. Two years ago, we built six. Do I expect 14 out of 15 builds to be outboards next year? Probably not. But we know we’re going to build a significant number of them.”

Along similar lines, I asked Johnston about Alcantara, the go-fast boating upholstery world’s current favorite fabric. (My theory is that if you stand around long enough at a boat company they’ll upholster you in Alcantara.) While he said he doesn’t see Alcantara going away soon—make that ever—DCB has been working with another material called Cool Touch, and that the material has lots of potential.

“Cool Touch is a marine vinyl that looks like coarse, plush leather,” he said. “Alcantara is great because it doesn’t get as hot as conventional vinyl, which enables you to bring darker colors into your boat’s interior. Black Alcantara, for example, is cooler than white vinyl. Black Cool Touch gets about as hot as white vinyl. So we can still use it to create a leather look and change things up a bit in our interiors.”

Exterior styling for DCB models also will eventually evolve, too, said Johnston, though neither the team at the company nor its customers are in any rush. The M33R and M44 models introduced a few new styling elements, particularly in the area of scoops.

“At some point in the future, there could be a little bit of a styling revamp, but in a way that maintains the DNA of DCB,” he said. “If you look at our old F-series catamarans, which were released when we were both still at Powerboat, they were so cool. Now, I sometimes hear F-series owners joking around and calling them ‘Fossil’ series’ boats next to the M-series boats. Because the M-series boats are now the current DCB standard.

“Of course, regardless of what we do we’ll keep building our boats at the same high level of quality and attention to detail people expect,” he added. “That’s one thing that never will change.”