You are at:Home»Awesome»Even More Support

Dozens of performance boats make their way along Missouri’s Lake of the Ozarks during the 10th annual Support Our Troops Poker Run. Photo by Brad Glidewell

Thanks to my friend, Ed Champion, I’ve kept a watchful eye on the Support Our Troops Poker Run over the past decade, and it’s been neat to see the MidwestBoatParty.com-hosted event continue to grow year in and year out.

Champion isn’t nearly as involved with the poker run, which takes place on Missouri’s Lake of the Ozarks and benefits the H.E.R.O.E.S. Care program in Fenton, Mo., as he once was since his full-time job with Big Thunder Marine keeps him rather busy, but the event is still going strong. In fact, this year’s 13-stop run that took place Friday, June 23, with gatherings the day before and after had 106 boats registered and donated a record-setting $29,000 to the program that provides complete and proactive support for members of all branches of the military and their families through pre-deployment, deployment, family reintegration and post-deployment.

There are a couple of reasons for that. Of course the generosity of both the sponsors and the participants is the primary one. Without sponsors such as Sunsation Boats, Poly Lift Boat Lifts and about 20 others, the event wouldn’t happen. Or if it did, it would be a fraction of what it is today.

Mark Maasen of Poly Lift Boat Lifts, one of the Support Our Troops Poker Run presenting sponsors, drove his Nor-Tech 340 Sport center console in the event. Photo by Brad Glidewell

And then there are the volunteers. They are the heartbeat of the event, if you will. One of the driving forces in that group is Amber Grisham, the upbeat promoter who has filled in nicely for Champion.

Grisham was extremely proud that the 10th annual event raised more money than ever before.

“We had such a great turnout for the 10th year,” Grisham said. “Even though we had a little rain during the drivers meeting, it didn’t last long and everyone was ready to go on time. We had 13 stops this year and multiple people made it to all 13, which is not easy to do. We also had boats from all over the country, including California—thanks for coming Devin Wozencraft—Colorado, Minnesota, Michigan, Texas and of course the surrounding states of Kansas, Nebraska, Iowa, Illinois and Oklahoma. 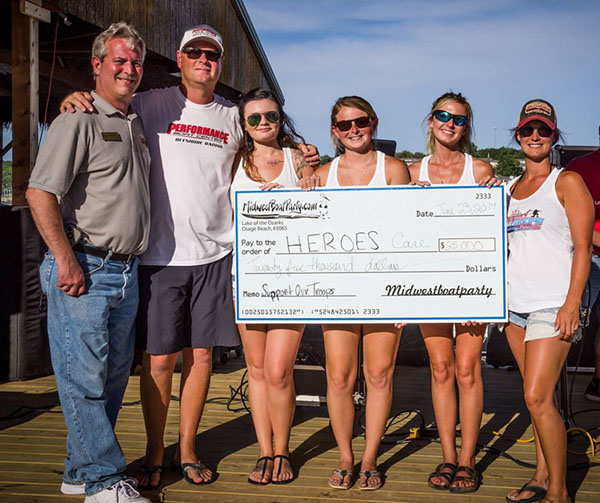 “We need to thank our generous sponsors as well as Performance Boat Center for stepping up to help us put on the event—we worked well together,” she continued. “We can’t wait for next year. This is always an amazing event. We love being able to give back to the military men and women who have given so much for us.”

Grisham said the participants hosted 20 military members for the all-day poker run, which started with breakfast at Camden on the Lake Resort and finished with a party at Dog Days. She also said the organizers are going to make a push to give even more rides to local military personnel next year.

While a date hasn’t been officially confirmed (it’s likely to be June 21-23, 2018), I’m hoping to join them next year and see what they come up with to improve the event yet again.