You are at:Home»Awesome»Here’s Lookin’ At You 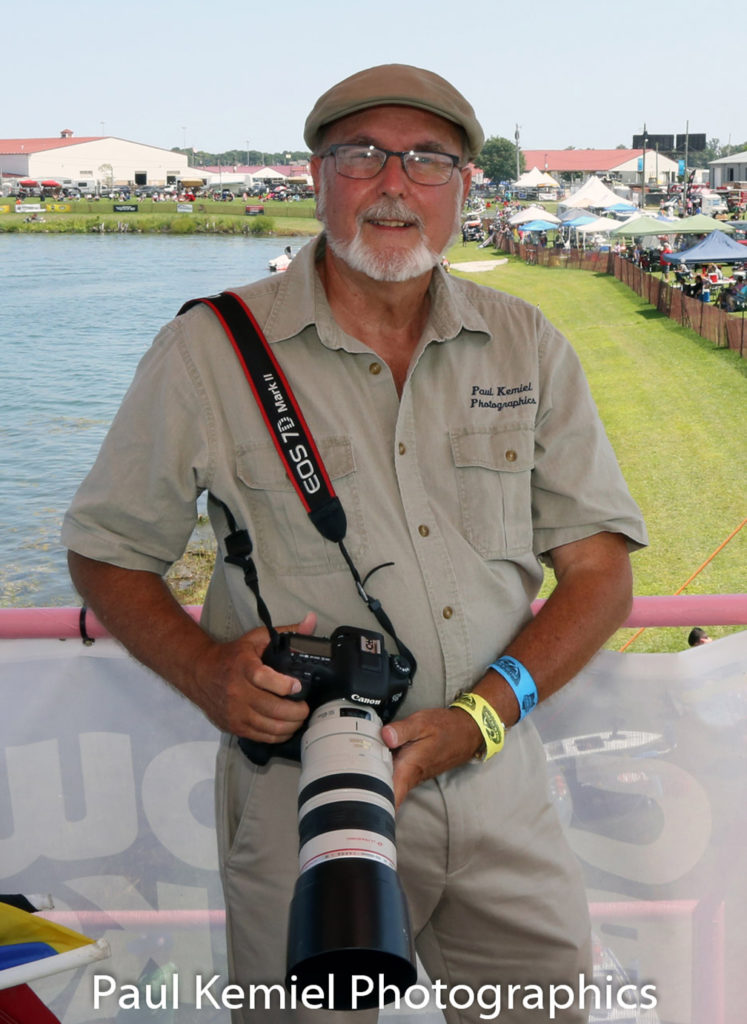 Paul Kemiel enters his 38th year of a dynamic career capturing the action of powerboat racing.

It all started at the Formula One Grand Prix auto race in Watkins Glen, New York back in 1978 and that’s when the lure of photographing high-speed motorsports launched Paul Kemiel into his storied and long-running profession in the world of Offshore, Unlimited Hydroplanes and Formula One Tunnel boats.

The Michigan City, Indiana native attended his first Unlimited Hydroplane and Offshore Powerboat race in Detroit: the 1981event gave the green flag to his publishing career as he sold those images to LakeLand Boating Magazine.

During those early days, “as an aspiring photographer, I met Ron Thibedeau,” Paul told me. For those who weren’t around during what’s been hailed as offshore’s glory days, Thibedeau’s iconic presence at race venues was simply a stand out: dressed in signature safari-tan shirt, pants and brown cowboy boots while hanging out of a helicopter, standing on a skid attached only by a single safety belt as he photographed the action below with his Hasselblad camera.

“Ron Thibedeau was THE Offshore photographer, whose work landed on the pages of every boat racing magazine. He was a soft spoken gentleman who was generous with his time and knowledge in helping answer my questions regarding procurements and in flight protocol.” 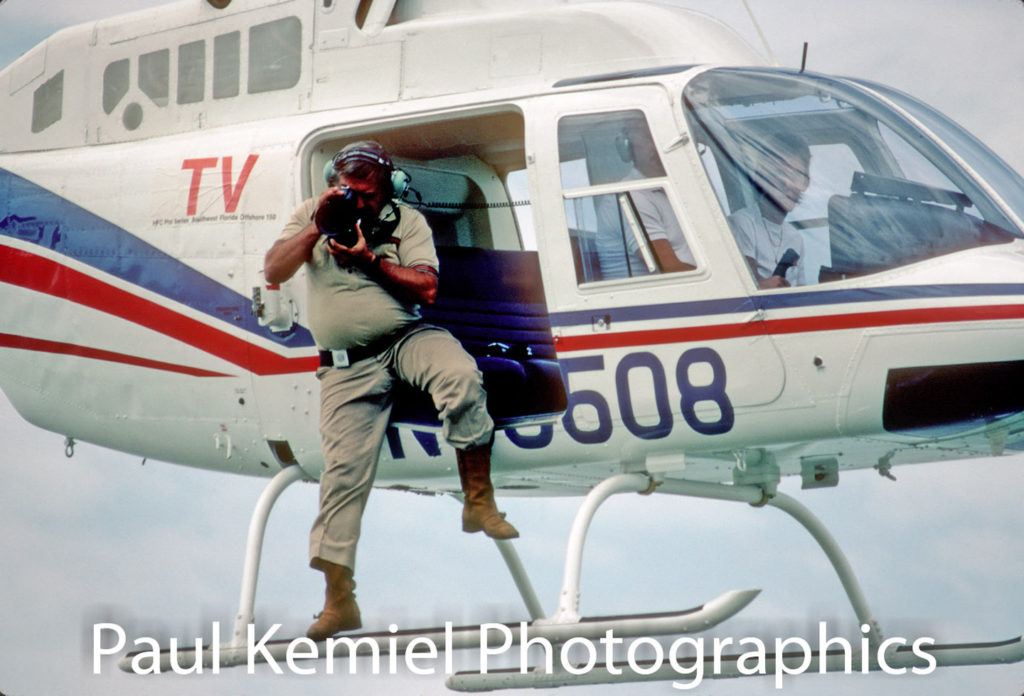 “Thibedeau once told me that while in his heli battling wind resistance at over 120 mph, he lost his Rolex             watch as it fell into the waters below.” Courtesy Paul Kemiel Photographics

After covering a mega list of racing events over the last few decades, I had to ask: what is your most memorable photo assignment? He responded with a multi-tiered answer. “The 1988 UIM Offshore World Championships held at Guernsey, England.

“I worked along with legendary multi-titled racer Betty Cook as we were the only US media representatives to cover this week long event,” he said. “It was truly a global effort in reporting this event. As an American photographer, I was hired by England-based Powerboat & Waterskiing Magazine working in conjunction with an Italian journalist who wrote the race article. Deadlines were met for the upcoming issue thru the teamwork of my international colleagues.”

However, a royal invitation from Princess Caroline of Monaco and her husband, Stefano Casiraghi, driver of “PINOT DI PINOT” presented Kemiel with a larger-than-life memory from this stellar championship week. “Since we were staying at the same host hotel and our rooms were adjacent, they asked me to join the royal family for dinner in the St. Pierre Park Hotel restaurant. It was an unbelievable experience that has made a lasting impression.” 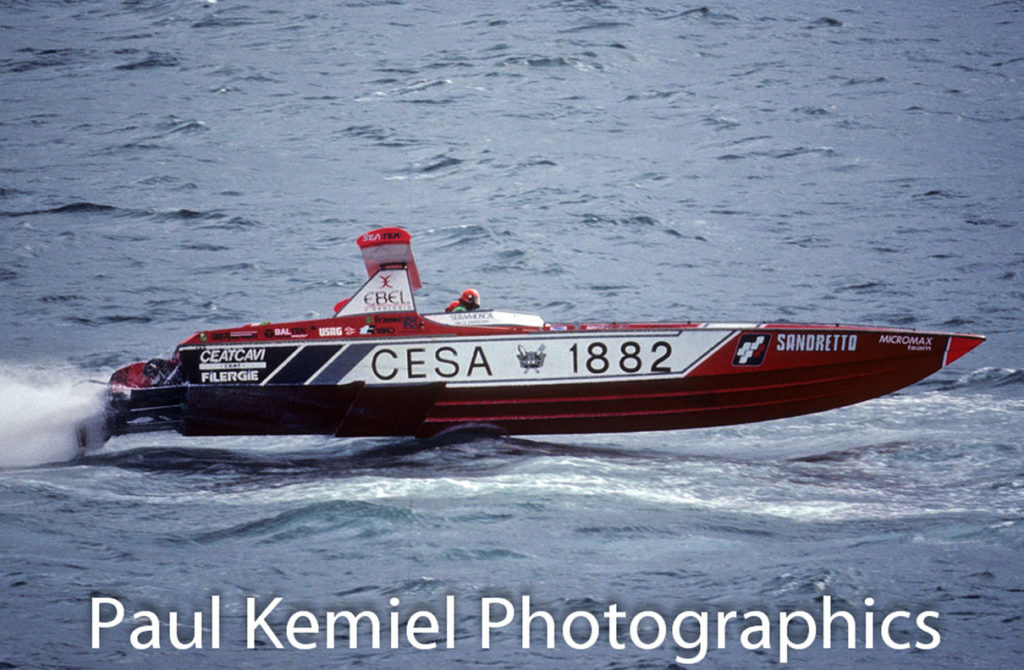 I met Paul Kemiel while working as a public relations representative at various American Power Boat Association (APBA) and Offshore Power Boat Racing Association (OPBRA) events; then, I had the opportunity to work with him in 1997 when I moved forward with my new career chapter as a writer for the now-shuttered magazine, Hot Boat. We synced within just a few assignments as each of us knew what the other needed to complete our assignment. “We had a great run for what we did,” Paul said of our Hot Boat days. “It was an extra bonus for us.”

His photographs have been published throughout the USA, as well as worldwide exposure throughout fifteen foreign countries. As a regular contributor to the APBA Propeller Magazine since 1988, Kemiel’s photographs have appeared in the pages of Powerboat, Performance Boats, Hot Boat, Soundings, Speed Boat and Race Boat International, as well as the Mercury Racing calendar. His digital images are featured in Speed On The Water and the Sweden-based Offshoreracing.SE. 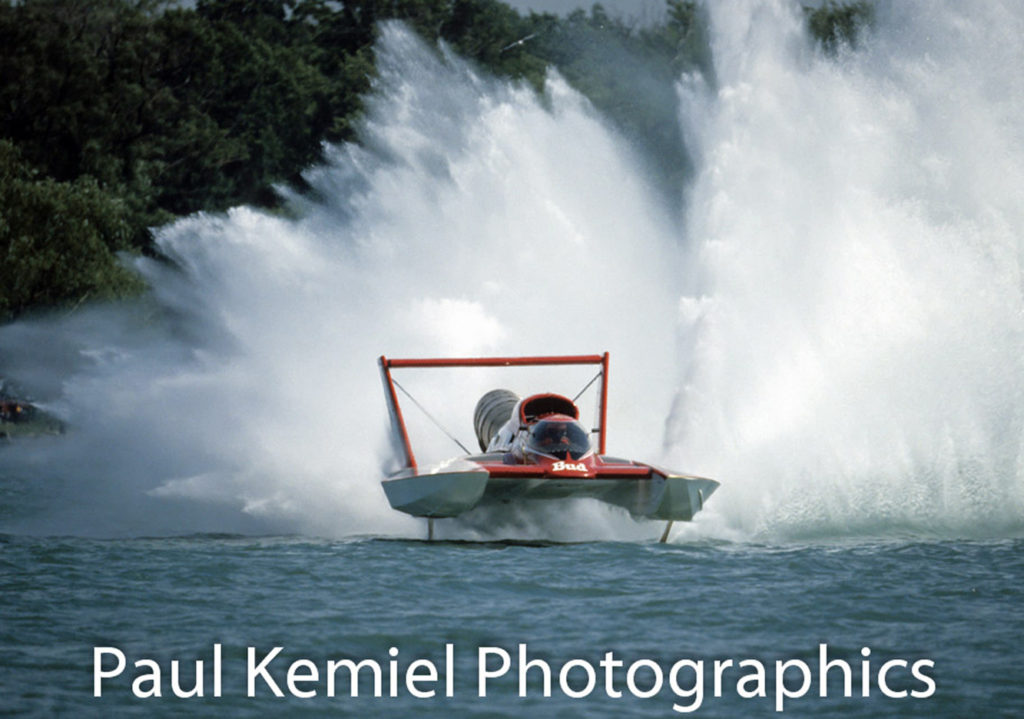 “My passion in recording the images of the Unlimited Hydroplanes, Offshore, Champboat/tunnel boats and Formula One Grand Prix is in capturing the subject at its highest peak of action,” Kemiel explained. “Squeezing the camera’s shutter release at the ‘decisive moment’ —  that split second in freezing the boat and propeller out of the water or a race car’s wheel off the pavement in the apex of the turn. I never tire in my commitment to achieve that goal. It’s always a challenge.”