You are at:Home»Awesome»How Cool Is Cru?

The kid is only four years old, but after seeing him at the Big Cat Poker Run in Discovery Bay, Calif., last month and the Lake Powell Challenge in Page, Ariz., this month, I have a feeling little Cru Noack knows he’s a cool kid. Now whether he knows how cool he is or how good he has it is another story as his parents, Cherilyn and Josh Noack, are two key members of Teague Custom Marine, the Valencia, Calif.-based company founded by Cru’s grandfather (and Cherilyn’s dad), Bob Teague. 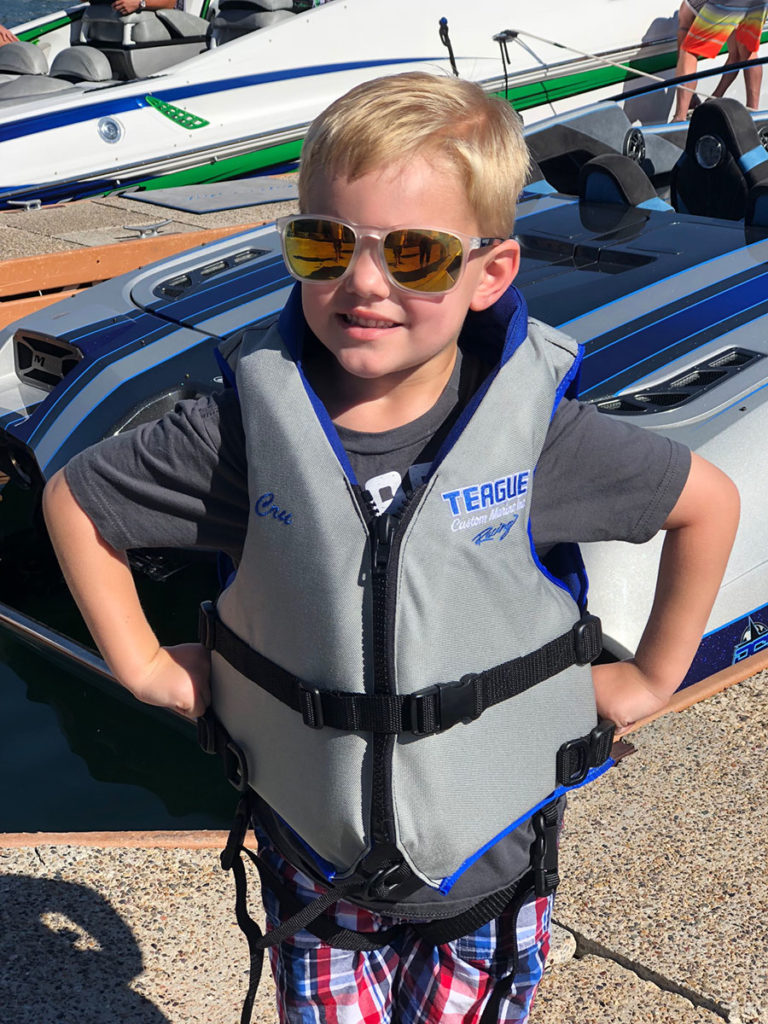 Not only does Cru rock his very own TCM-embroidered youth lifevest from Lifeline Race Gear at events, he can already tell you what kind of boats his family owns and what size the boats are whether it’s the brand new M31 Widebody from DCB Performance Boats the Teagues debuted at the Big Cat Poker Run or the family’s 40-foot Skater Powerboats catamaran or the new 26-foot Adrenaline Powerboats cat Josh and Cherilyn picked up in late August and are planning to rig and power with twin Mercury Racing 300R engines. 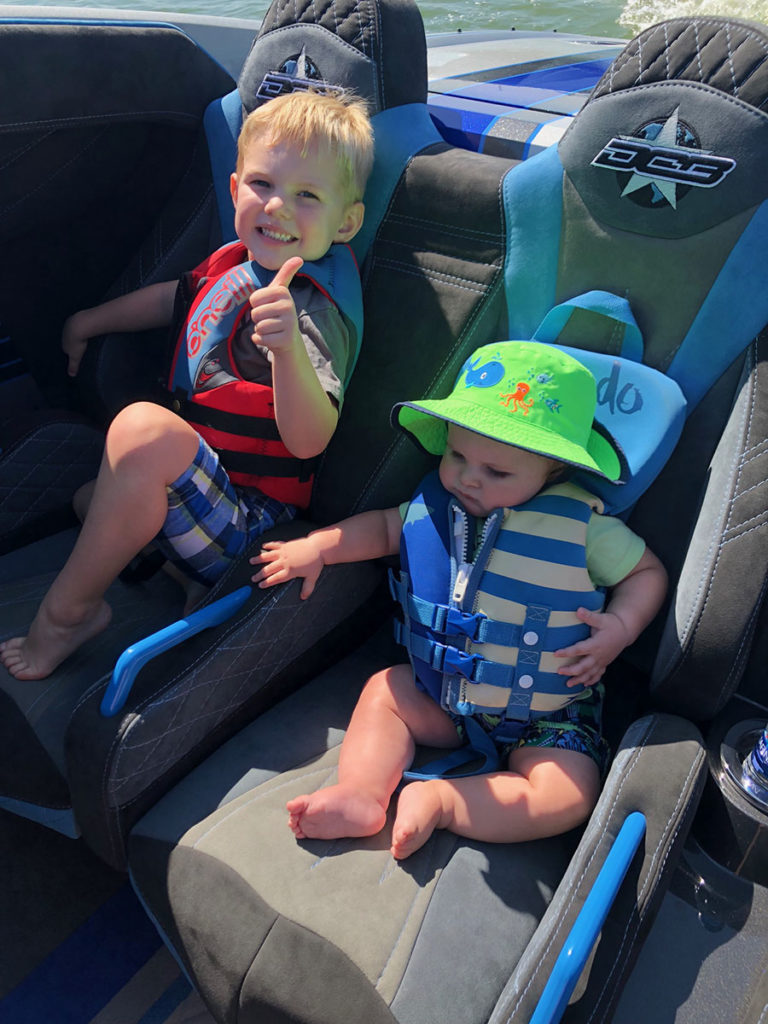 I don’t think he’s driving any boats on his own yet, but surely that isn’t too far away—at least when he starts asking to take charge of the wheel and throttles.

“Cru is so cute about all the boat stuff and he’s super into the logos and names of the boats,” said Cherilyn, an obviously proud mother who enjoys taking both of her sons to boating events even though it can be a lot of work—fortunately she can usually rely on some help from her parents or Josh’s parents who own a DCB F29 catamaran. “He’s now starting to pay more attention to the Teague logo around the shop or at events, and it’s great because he says ‘Teague Custom Marine boat shop’ every time he sees it. We haven’t really forced any of this on him either, he just really likes the boats.” 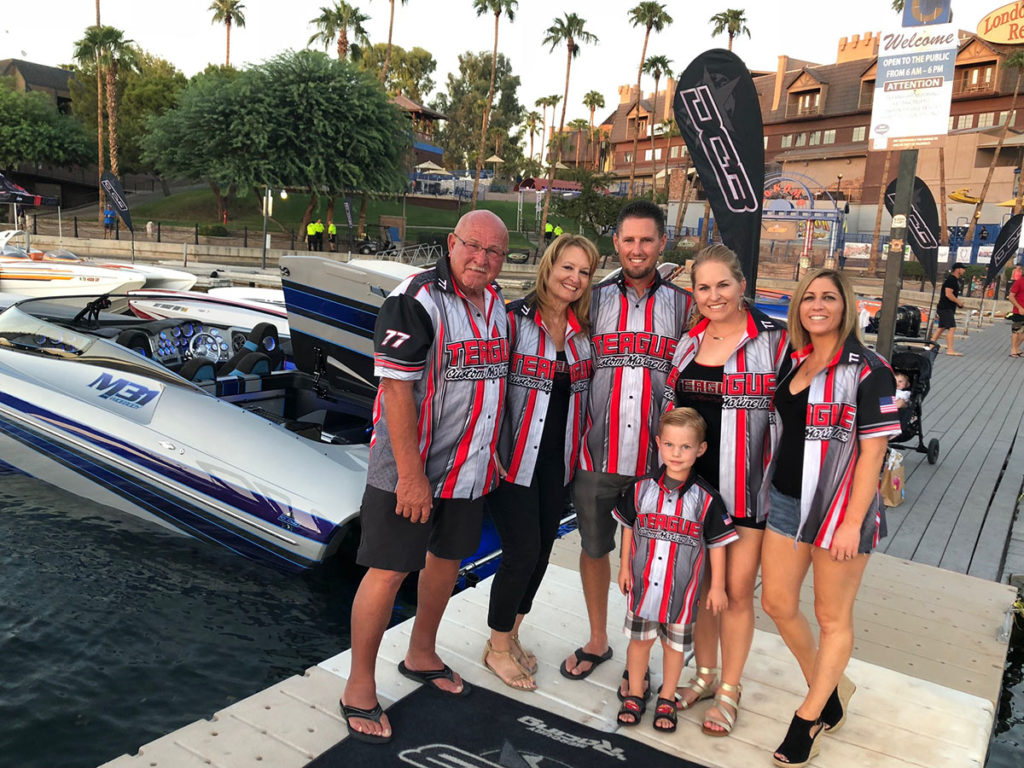 Of course that seems like a given being that he is a boy and when he visits his parents at work he gets to see engines and boat parts everywhere he turns sitting next to models from Donzi, Eliminator, Fountain, Howard, MTI and much more. But that isn’t always the case.

Cherilyn said Cru, who so far is very accepting and protective of his 11-month-old brother, definitely makes his grandfather—one of the most legendary offshore racers and performance boaters of all time—proud.

“My dad can be a little strict with him because he wants him to behave, but he’s a very loving grandfather and I can tell he enjoys his time with his grandkids,” said Cherilyn, who is happy to be at home after a busy month that included trips to the Big Cat Poker Run, in which TCM is a presenting sponsor, the Lake Powell Challenge and last weekend’s DCB Owners Regatta in Lake Havasu City, Ariz. “Boating has always been a family thing for my family and Josh’s family so we’re happy we can continue that with our kids. I’ve always said that a family who boats together stays together.”

As for little Cru, who won’t be so little for much longer, he’s pretty lucky to be part of such an esteemed boating family. I’m sure one day he’ll realize that.