You are at:Home»Awesome»Inside The Cockpit And Out 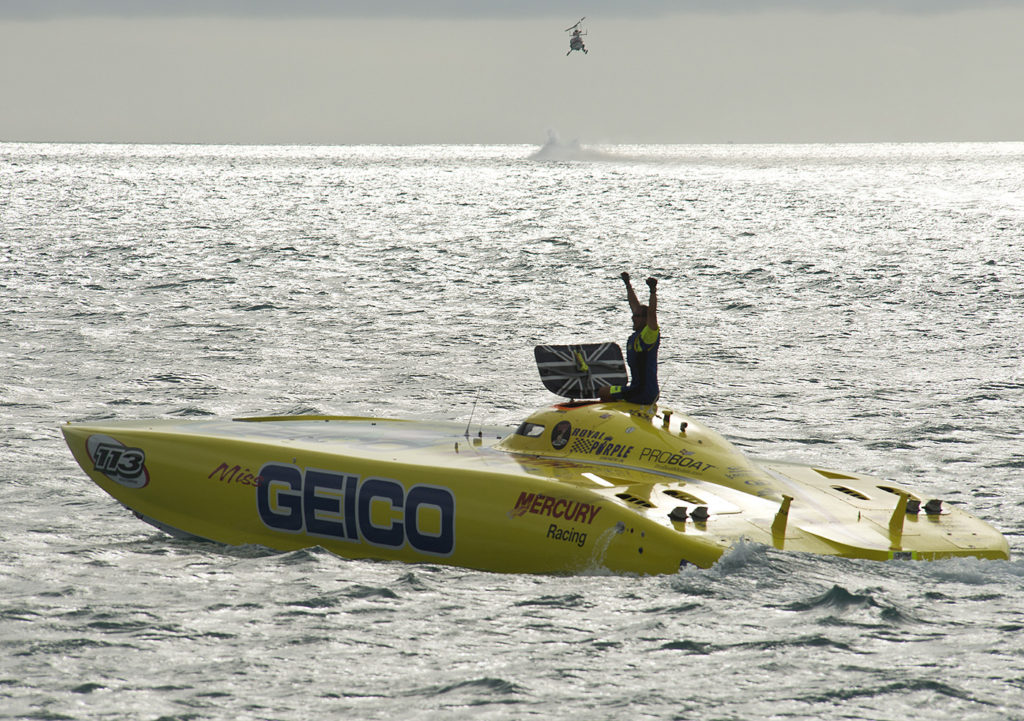 Still an active partner in the Miss GEICO offshore racing team owners group, Granet exited the cockpit of the team’s 44-foot Victory catamaran following a tragic accident in July 2017 that claimed the life of American Ethanol/Cat Can Do throttleman Keith Holmes. Still leading his team, Beckley exited the cockpit of his Curry Refrigeration And Air Conditioning-backed 30-foot Skater catamaran in July 2018 after being diagnosed with a heart disorder called Atrial Fibrillation.

And for very different reasons, both are grateful to be in their respective roles at the Super Boat International Offshore World Championships in Key West, Fla., this week.

“Emotionally it’s out of place imagining racing in Key West without my GEICO team family being there,” said Granet. “So much of my life has gone into the team. But there is a sense of freedom racing with Randy Sweers in the Superboat class and Nick Scafidi in the Stock class. It’s is exciting to embark on new challenge, and either way I’ll bring everything I know and the professionalism they expect. Key West is a serious race.”

A colorful and charismatic character with a medium-large to super-size personality—and a heart to match—Granet realizes that not everyone is his fan. And he’s OK with that. In fact, he’s motivated by it.

Though Ryan Beckley won’t be in his beloved raceboat this week, he’ll lead his team from the sidelines for all three races. Photo by Pete Boden/Shoot 2 Thrill Pix.

“I know there are some people inside the sport—the haters—who would love to see me fail,” he said. “And then there are true fans, fellow competitors and friends who would love see to my success. To some degree, that’s a driver for me. But beyond all that, my job is to give my throttleman in each boat this week the confidence to run as hard as we can—and know we did our best.”

Though sitting on the sidelines through three races this week won’t be easy for Beckley, who dreamed of becoming an offshore racer while growing up in Key West and made that dream come true for the first time in 1997, he’s at peace with it. That’s because you could say—without exaggeration—that his life depends on it.

“I take 11 pills a day now for A-Fib and I have a five-year-old son,” he said. “So it’s OK to be out of the boat. I have been in hundreds of boat races. And this is not the end of the story.

“It is nerve-wracking to watch other people your boat, though,” he continued. “But I’m confident in driver Greg DeRenzo and throttleman and John Robinson. They’re also going to race the boat in the Offshore Powerboat Association worlds the following week in Englewood Beach (Fla.)”

Plus, having the boat compete in Key West this year has larger short- and long-term ramifications for Beckley.

“I’m really, really happy we can fulfill our sponsor obligations in Key West,” he continued. “I could not take someone’s sponsorship money and then not be able to compete, and risk having a sponsor not come back next year. As much as I love it, our racing is more of a business than most people understand.”

One good man in the cockpit, another good man out it—both grateful to be in Key West this week. Granet and Beckley aren’t just dedicated to the sport they love. They’re a pair of true professionals who see the bigger picture and—in their own separate yet equal ways—will bring joy to the fans in Key West this week.