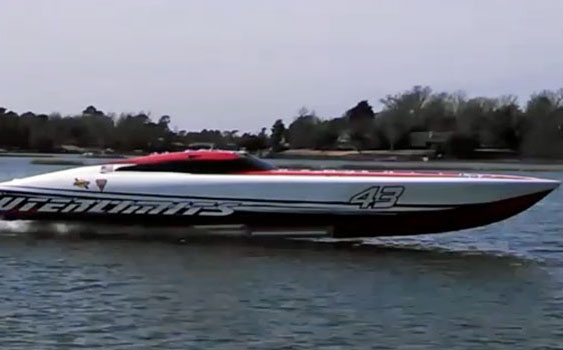 In late March, this SV 43 canopied V-bottom will attempt to break the current V-bottom kilo record of 171 mph set 10 years ago.

Just moments before happy hour—one of my favorite hours of the week—last Saturday evening, I got a call from Mike Fiore of Outerlimits Offshore Powerboats in Bristol, R.I. Months earlier, Fiore had told me that one of his goals for 2014 was to break Reggie Fountain’s existing V-bottom kilo record of 171 mph set in 2004, but it wasn’t something he was ready to announce publicly. Knowing that the cat was about to slip out of the bag for any number reasons, Fiore called to give me the news on the record. Within an hour, the story was live on speedonthewater.com. By the next morning, more than 1,000 people had read it.

By the next afternoon Reggie Fountain III, the youngest son of the iconic founder of Fountain Powerboats had posted on his Facebook page, “Looks like it’s time to up the kilo record.” The following day in an interview with Hammer Down Boating, a popular Facebook page focused on high-performance boating, he announced his plans to attempt to break his father’s record in Twisted Metal, a 42-foot canopied Fountain raceboat.

But wait—there’s more. In an interview for a story I wrote yesterday afternoon on the Offshore Powerboat Association joining the American Power Boat Association, OPA president Ed “Smitty” Smith told me that a plan is in the works for APBA-sanctioned kilo runs in June on New Jersey’s Barnegat Bay.

Three kilo-run news items in three days when there haven’t been three worth talking about—much less reporting on—in more than three years? It’s enough to make your head spin. How will it all turn out? Well, like 12,000-plus (and still climbing) people who have viewed the offshoreonly.com message board thread based on the Outerlimits news, I have an opinion or two. But rather than voice them, I’ll just cover the stories as they develop. 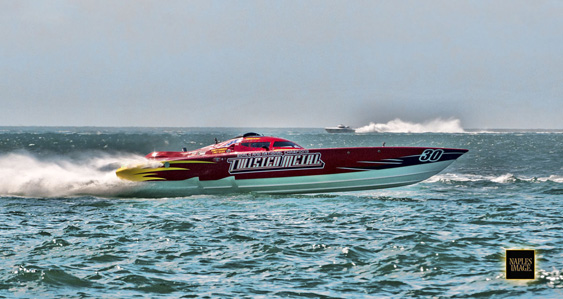 So what the hell is a kilo run? That might seem obvious to seasoned offshore racing fans, but after reading a few posts in the above mentioned thread there seems to be more than a little confusion. A kilo run is a time trial, meaning how long it takes a given boat to run a straight-line 1-kilometer (3,280 feet) course. That time is translated into an average speed, in miles per hour, over the kilometer.

But wait—there’s more. Both APBA and Super Boat International, the two primary sanctioning bodies in domestic offshore racing, require two passes within 10 to 15 minutes (depending on the sanctioning body) of one another through the kilometer course, and those passes are required to be in opposite directions. The average speed from each pass is combined to create an average overall speed.

Consider this: At 171 mph (275 kilometers per hour for those who dig the metric stuff), the 42-foot Fountain that currently holds the V-bottom kilo record covered the kilometer in a little more than 13 seconds. On one run, the 42-footer averaged a blistering 177 mph through the course.

The key to a successful kilo run according to world champion throttleman John Tomlinson, a man who’s lost track of how many kilo runs he’s done over the years in catamarans and at least one scary V-bottom, is in the run-up to the course.

“You want to enter at the maximum speed and maintain it—you don’t want to come in and exit 8 mph faster, you want to come in at the absolute maximum speed and sustain it,” Tomlinson explained. “But that can be very hard to do. In a perfect world in a cat, I’d like about 2-1/2 miles of run-up space and you rarely have that much. When I did the kilo runs every year at the Fountain plant [on the Pamlico River in Washington, N.C.]we never had that much room. One year when we did them on the Savannah River [in Savannah, Ga.]I could never get the boat over 180 because there was a bend in the river that constantly forced us to turn the rudder.”

Other common kilo-run challenges are the elements and water conditions. “In the Sarasota [Fla.] kilos, we had plenty of run-up room, but because you have to do the run from both directions there’s usually a more favorable direction based on the wind,” said Tomlinson. “One time when I did a kilo run in what would become the Bacardi Silver cat on the Lake of the Ozarks in Missouri, we got up in the early morning and it was nine degrees. We had to scrape the ice off the boat’s windshield. There was a low-lying fog bank on the water that didn’t clear until five minutes before noon—the same time our permit for the kilo ran out. We didn’t even get to run.”

And last but far from the least, there is the challenge of piloting a catamaran or V-bottom at speeds that, in the event of an accident, could and likely would kill you. What seems simple—driving a boat in a straight line—is not, especially when a boat develops unexpected handling problems such as those Tomlinson experienced in a 46-foot Cigarette during kilo record attempts several years ago.

“I’d prefer to do kilo runs in a cat,” he added. “I know that not everyone feels that way, but I do.”

And that brings me to one final observation about kilo runs: Any kilo run a driver and copilot walk away from is a successful one, regardless of whether a record falls or remains intact. Survival is far more important than bragging rights or a perceived marketing advantage.

“I do not expect to sell one single extra boat if we break the kilo record—I don’t expect any sales because of it,” Fiore told me Saturday evening. “I’m doing this because my friends and I thought breaking the kilo record would be a cool thing to do, a fun thing to do. That’s it, and what matters more than anything else is that everyone comes back safely.”