You are at:Home»Awesome»Mr. Jones’ Most Excellent Ongoing Adventure

After 25 years of organizing poker runs, Stu Jones of the Florida Powerboat Club has earned the right to be a little burned out and in need of some soul recharging at the end of any given season, which ends every November with the club’s signature Key West Poker Run. And yet with the Pompano Beach-based club’s signature event, which attracted 214 registered boats, just three weeks behind him, he’s anything but.

In fact, Jones can hardly contain himself when asked about his plans for the club next year. To borrow from the surfing world, he is totally stoked about the 2019 FPC event roster. 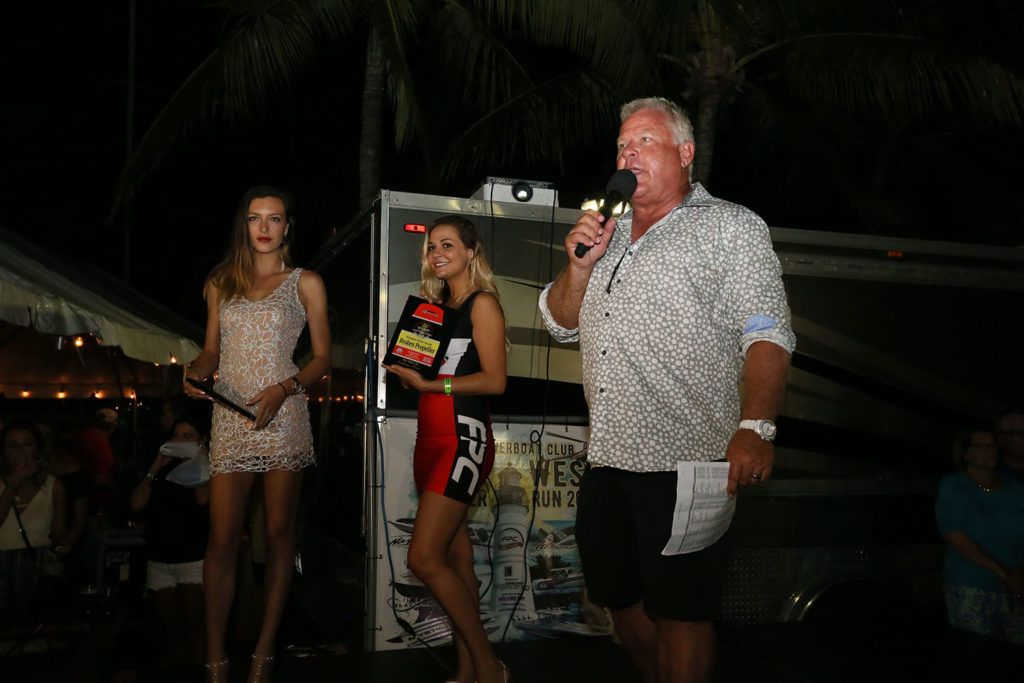 Credit at least part of his enthusiasm to near completion of “Project 1080 HP,” the restoration and repowering—with twin Mercury Racing 540 engines—of his 2000 model-year Cigarette Racing Team 38’ Top Gun.

“We’re in the final stretch,” he said. “Performance Marine Trading is doing the rigging. Dark Force Marine did the incredible graphics. And Mike (Mears) at Fineline Interiors did an amazing job—I couldn’t’ have even imagined it. Cigarette interiors are his forte, and instead of upgrading existing parts he went with all new parts. Though we didn’t go with painted fiberglass shells on the backs of the bolsters, we got the new high-back versions of those seats from Cigarette. Mike also built an incredible new bench with integrated headrests for the cockpit. And Cigarette sponsored all of the custom embroidery.”

But Jones has more than his revitalized, conventional V-bottom 38-footer, which he will use as a paceboat in all FPC poker next year, to be stoked about. He’s been working hard to change up and improve his event schedule for 2019, and he’s thrilled with all that lies ahead for the club and its members.

“We have a lot of new formats,” he said. “Our Winter Poker Run in January, which has been going to Key Largo for the past few years, is going back to the Hawk’s Cay Resort on Duck Key. Our Miami Boat Show event in February, will have split venues—the new Marriott Autograph Collection Playa Largo Resort and Spa and the Hilton Curio Collection Baker’s Cay Resort—in Key Largo. This year, we stayed in Miami for the Miami Show event and barely had 40 boats. Next year, we can accommodate 60 boats and we’re happy to be returning Key Largo.

“Though we’re sticking with our Tampa venue, which we introduced this year, for our 2019 Tampa Bay Poker Run, we’ve moved the dates to late March so they don’t conflict with the Palm Beach Boat show,” he continued. “That will allow our supporting manufacturers to have a stronger presence in that event. In April, we’re essentially doing a do-over of our Fort Myers Poker Run, which always has a strong Nor-Tech presence as it’s in their backyard. It’s such a great experience and it can handle more than 40 boats.” 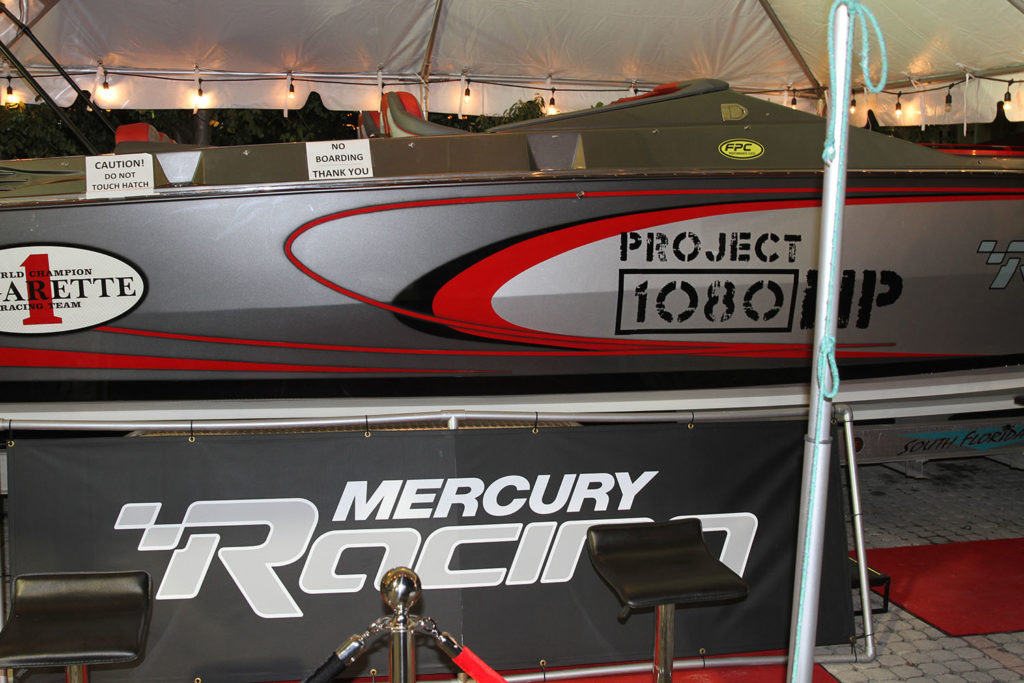 Fans of the FPC Cigarette “Project 1080 HP” 38’ Top Gun will get to see the final version at all club events in 2019, as well as at various events around the country.

Jones said that the club has a new poker run coming in late spring in Orange Beach, Ala. The event will be based out of The Wharf, a brand-new waterfront area with a 200-slip floating dock, a variety of bars and restaurants, an expansive retail complex, hotels and luxury condominiums for rent.

“The Wharf is one of those turnkey venues that poker-run organizers dream of,” he said. “It will be a perfect transitional run for people heading back to the Midwest and Southwest for the summer. We haven’t had a poker run in Orange Beach since 2004 so we’re looking forward to going back.

“Our Bahamas run in June also is getting a new format,” he continued. “We’re not going straight to the Abacos, we’re going to Bimini and then Nassau. I found a new resort in Nassau, I can’t release the name yet because the contract isn’t complete, that gives us a lot of variety in what we can do once we get there. For example, we’re actually going to charter a boat to take us from there to the Exumas, which is an 85-mile run each way. So people can just go have fun for the day and not have to worry about anything other than bringing their sunscreen and their coolers.”

After the Bahamas event, Jones and his wife/business partner, Jackie, and their two sons will embark on what he calls the “summer poker-run tour,” which will see him hauling the Project 1080 HP Cigarette more than 10,000 miles before he returns to Florida in August to produce the FPC Emerald Coast Powerboat Week in Destin. Jones plans to start off with the Performance Boat Center-organized Cigarette Owners Rendezvous on Missouri’s Lake of the Ozarks in June. From there he hopes to hit the Four Horsemen Poker Run in Oshkosh, Wis.—or at the very least visit Mercury in nearby Fond du Lac and run his 38-footer on Lake Winnebago—as well as run his Cigarette “on the Chicago side” of Lake Michigan. He’s also hoping to campaign the boat in Erie Poker Run in Pennsylvania, the Ray Nuchereno Memorial Poker Run in Buffalo, N.Y., and the West Michigan Offshore Grand Haven event.

After that, Jones and company will head to Lake Ontario for seven to 10 days of “less structured” time exploring the region by water. He also plans to participate in one Performance Boat Club of Canada poker run—originally from Toronto, Jones is a club member—before heading south to put on his Destin event. And he might just follow that up with a trip to the Lake Cumberland Poker Run in Kentucky in September.

“I’ve mapped it out and it’s well over 10,000 miles of driving,” said Jones. “My family and I still enjoy living the RV life, so we’re excited about it.

“I don’t think anyone will put more hours on a pair of Mercury Racing 540s than I will next summer,” he added, then laughed. “That was part of the point of the project, to showcase these engines with hours and hours of trouble-free boating—and how they can bring an older boat back to life.”

Of course, come October Jones will need to slow down so he can speed up, meaning get ready for the annual Key West event. (Plus, he has the FPC September Fall Bimini Blast” and October Florida Keys Fall Fun Run to handle.) And even with the 2018 version of his Key West extravaganza just a few weeks behind him, he’s already looking forward to it.

Because as good as any prior event season was for Jones, he’s always looking forward to the next one and trying to find ways to make it better for his customers. The Florida Powerboat Club isn’t just his business. It is his ongoing—and decidedly most-excellent—adventure.