You are at:Home»Awesome»Officially ‘Captain Morgan’ Now

The Boyne Thunder Poker Run in Northern Michigan wasn’t my oldest daughter Morgan’s first experience at a performance boat event—she’s been to the Big Cat Poker Run in Discovery Bay, Calif., the Desert Storm Poker Run in Lake Havasu City, Ariz., and the Lake of the Ozarks Shootout in Sunrise Beach, Mo. It was, though, the first event where she started to realize what dad does for a living is kind of cool. 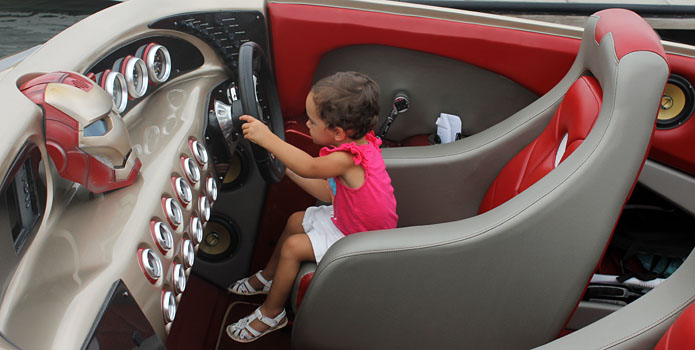 A then three-year-old Morgan tried to take the helm of Ironman during the 2013 Lake of the Ozarks Shootout in Central Missouri. Photo by Jason Johnson

Of course, thanks to the Speed On The Water Year In Review magazines sitting on our coffee table and the Speedonthewater.com sticker on my car and my computer, my 8-year-old is very aware that I cover fast boats. Beyond that, her interest pretty much ends.

We’ll see if that’s the case any longer after getting bit by the boating bug at what could be considered the best poker run on the planet. It helped that she’s at an old enough age now to soak it all in, but it really helped that our relatively new friends from Michigan—John and Julie Tokar, who own the jaw-dropping Outerlimits SV 43 Kahuna—took Morgan and her four-year-old sister, Colbie, cruising the day before the poker run in their “Plan B” boat, a Monterey Boats 328 Super Sport bowrider with twin 300-hp MerCruiser 350 Mag engines. 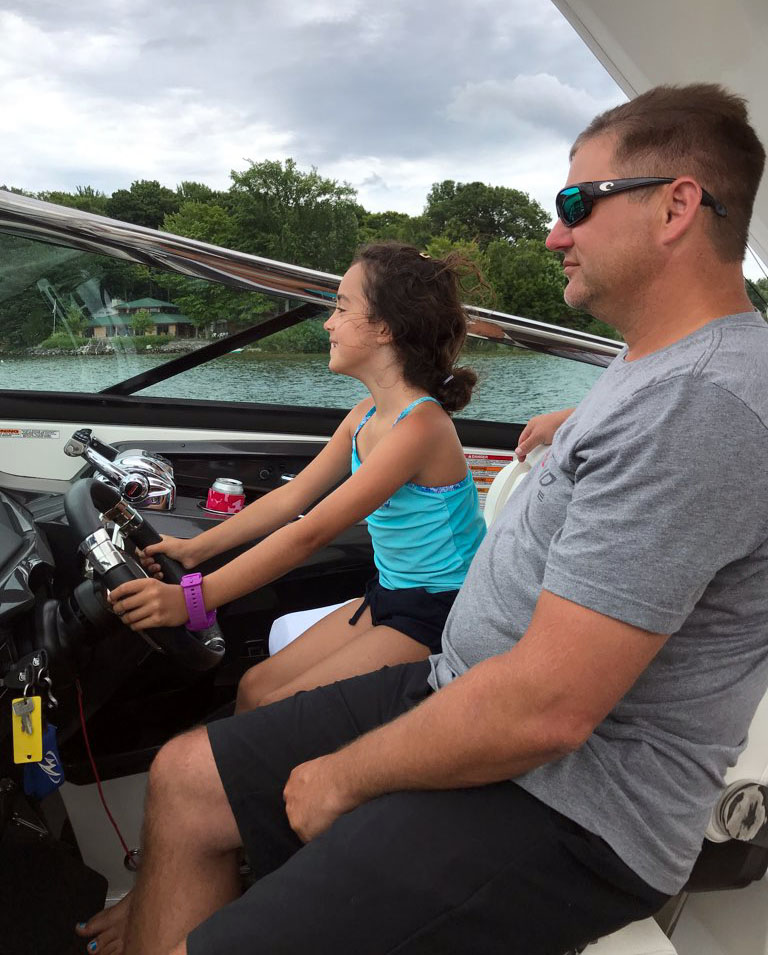 John even let Morgan take the helm, and you couldn’t wipe the smile off her face if you tried as she drove the 32-footer from East Jordan to Boyne City. Surely it was an experience she’ll be talking about for a long time, and it made me realized how quickly time flies since it doesn’t seem like that long ago she was reaching for the steering wheel in Ironman, the Hustler Powerboats 377 Talon project boat that Waves and Wheels owner Justin Wagner took us for a ride in five years ago on Lake of the Ozarks.

I have to thank the Tokars for being such amazing hosts. And judging by the smiles on everyone’s faces in the included image, they continued their gracious ways with the crew who participated in the poker run with them in full Kahuna gear even though the Outerlimits was back at home minus its engines since John sold the pair of Mercury Racing 1075SCis that were in the boat a few months back. 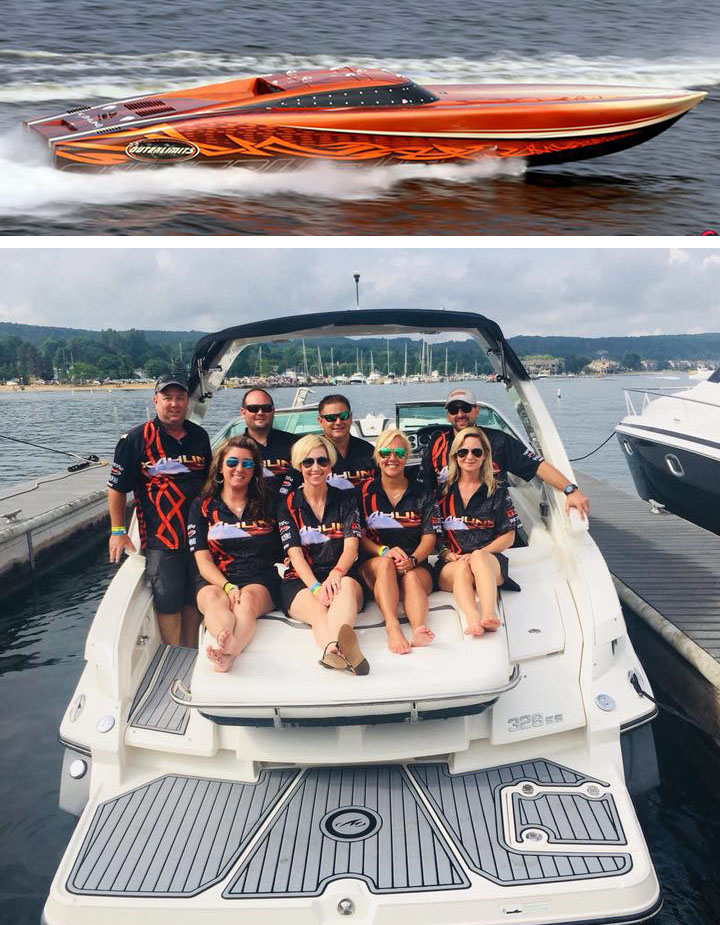 Even though they didn’t have their Outerlimits at the event, John and Julie Tokar still had a great time doing the Boyne Thunder Poker Run in their 32-foot Monterey.

Morgan also got a kick out of Friday evening’s Stroll The Streets of Boyne City, which featured a variety of boats and hot rods. The wooden works of art from Van Dam Custom Boats caught her attention as did the yellow Lamborghini that its owner started as we took shelter from the rain that came and went during the street festival. Parked on the corner of Water Street and Lake Street, the incredible Super Veloce G7, a Lamborghini-inspired 52-foot MTI catamaran owned by Don Verkuylen, was probably the most eye-catching boat of the bunch, but that didn’t stop Morgan from climbing every staircase she could to get a closer look at the inside of the boats.

The best part, which I almost forgot, is that she couldn’t believe there was a boat referred to as a cat. “That kind,” she instantly declared, “is my favorite.” The fact that she packed a sparkly kitty ears headband for the trip to Michigan should tell you all you need to know about that decision.

The fun didn’t end there as we stayed at Mike and Victoria Livorsi’s home on Illinois’ Fox Lake to close out the trip. And while we didn’t get a chance to take Mike’s latest ride—an RPM Powerboats 26 Redline powered 300-hp Mercury Racing engines—out on the lake, she got to crawl around the 26-foot cat and help put the cover on it.

I’m sure the enthusiasm will only continue in September when my family joins me for the Lake Powell Challenge in Northern Arizona. In fact, this proud dad might even let her skip a day of school next month to attend the Big Cat Poker Run near our home in Northern California.