As a reporter for the performance boat industry, I come across some great feel-good stories year in and year out. For some reason though 2019 seems to be loaded with more than usual.

Little did Louisiana’s Nate Michel know that a fellow performance boat enthusiast he met at his hometown Tickfaw 200 Poker Run months ago would be so helpful at the Lake of the Ozarks Shootout in Missouri. Photo by Pete Boden/Shoot 2 Thrill Pix

For example, a month ago Louisiana’s Nate Michel—a life-of-the-party, shirt-off-his-back performance boater I’ve had the pleasure of conversing with several times for various stories on different boats he’s owned and events he’s attended—thought the port-side engine hatch that flew off in the middle of Lake of the Ozarks while cruising Cloud IX, the 40-foot MTI he had completely redone over the last two years, around the popular Central Missouri lake during the Lake of the Ozarks Shootout Poker Run was long gone.

Little did he and the crew in his boat, which included his wife, Robin, and his friend and throttleman, Randy Sweers of FB Marine Group, know but a friend—in the performance boat community you can call someone that even though you’ve only met them one time at a poker run—witnessed the hatch blowing off in the main channel of the lake near Redhead Yacht Club and Performance Boat Center that Friday morning and retrieved it. 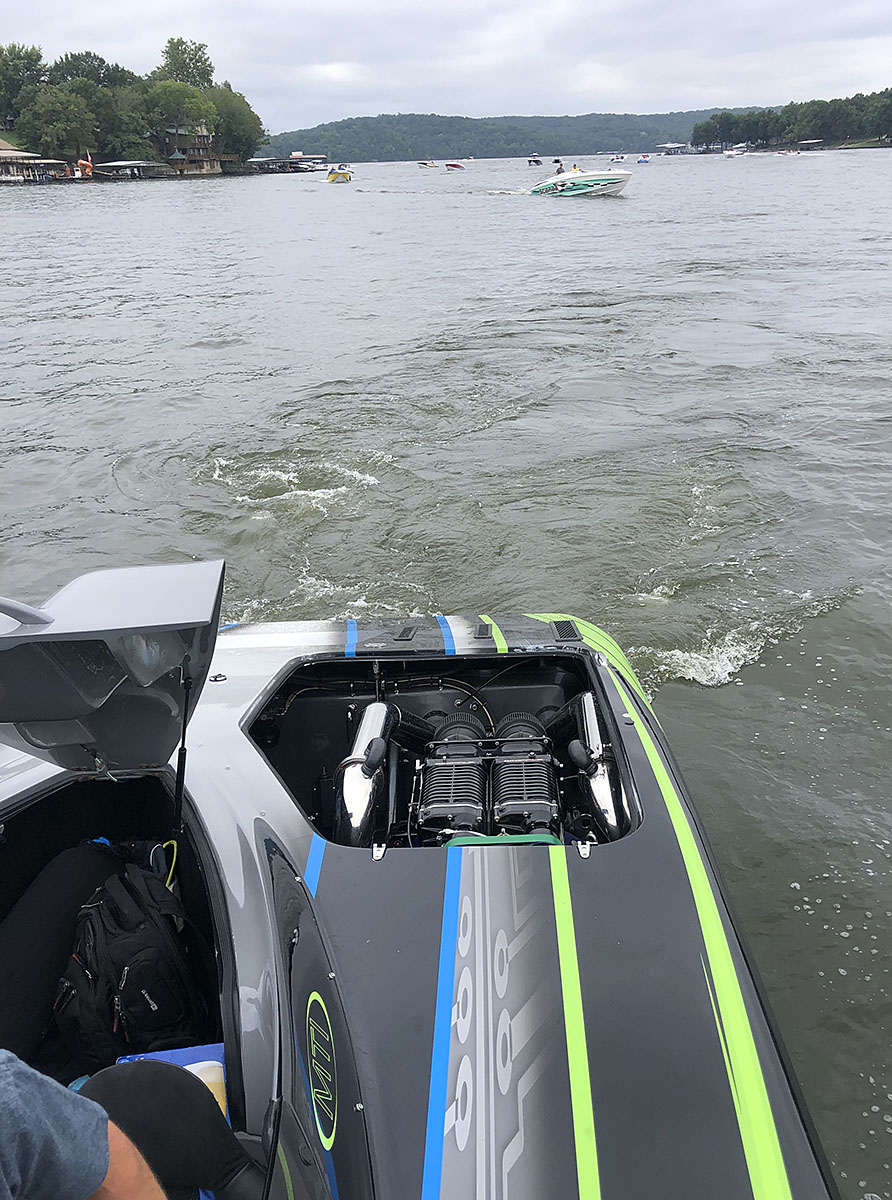 “To be honest, I was a little down because I’d had some misfortunes with both of my boats that week at the lake and we were just hanging out in the channel watching the big boats go by, which is what we were supposed to be doing not sitting in a embarrassing rental boat, when all of the sudden as Nate cruised by in his MTI we see the engine hatch fly into the air,” said Chad MacDonald, a dedicated performance boater from Colorado who has owned too many boats to list here—although he recently sold his Formula Boats 382 FAS3Tech and now owns a 35-foot Donzi Marine center console that he plans to take to Florida for the upcoming Florida Powerboat Club Key West Poker Run. “The hatch went at least 100 feet in the air; it was crazy to see. I don’t know how fast they were going, but they were getting after it. Following my initial reaction, which was ‘Holy (expletive)’, I immediately thought we needed to go find the hatch for everyone else’s safety on the lake, not just because Nate needed it back. We didn’t want someone hitting it, and it was floating right in the middle of the channel.

“Luckily it was paint side up so it wasn’t hard to find and it was in good condition,” MacDonald continued. “Once we got it out of the water, I snapped a picture of it and posted it on the MTI forum. I thought I had Nate’s number after meeting him at the Tickfaw 200 Poker Run in May but I couldn’t find it so I asked a friend who knows him and he had it. I texted Nate and said, ‘I have a gift for you.’ I sent the picture to him and he was so appreciative when we connected later that day at Captain Ron’s.” 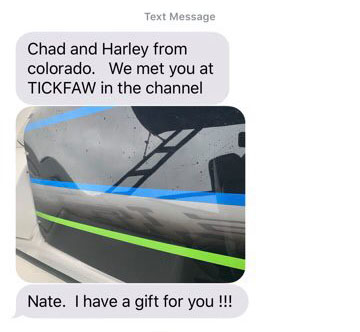 A quick text message from Chad MacDonald was all it took to connect Michel to his missing engine hatch.

MacDonald didn’t have the hatch with him when he ran into Michel and company at the host location of the Lake of the Ozarks Shootout on Friday afternoon but he let Michel know he could pick it up where they were staying, which was close to Redhead Yacht Club.

“Before he knew I had it, Nate told me he had posted an APB for his hatch on Facebook,” MacDonald said with a laugh. “He was so excited to see me—he figured the hatch was long gone. He told me ‘I owe you so much—you don’t know how much time and money you saved me.’ Then he asked me if he could pay me something. I told him you don’t owe me anything, but that my friend, who is also named Chad, had never been in an MTI so it would be cool if he could get a ride in Cloud IX.

“We met up with Nate and Randy later, gave them hatch, and after they put it back on, they came back and gave us a ride in the MTI,” he continued. “My buddy Chad had a smile on his face for a while after that. He was a little nervous at first, but with Randy on the sticks and Nate on the wheel, they put him at ease right away. That was definitely a ride we’ll remember forever.”

Michel will remember the ride forever as well. In fact, there’s a part of him that still can’t believe he got the hatch back.

“This is a perfect example of why I try to be friendly as I can be and have conversations with as many people as possible,” Michel said. “You just never know where or when you may connect again. It definitely felt great to get my hatch back, but it felt even better to make someone’s day by giving them a ride of their lifetime—the expressions on their faces were priceless. The amazing part is that the hatch barely had any damage and we were able to bolt it right back on the boat.”

Proof once again that the powerboat community is a small community—and a generous community.