You are at:Home»Awesome»Welcome West Michigan Offshore 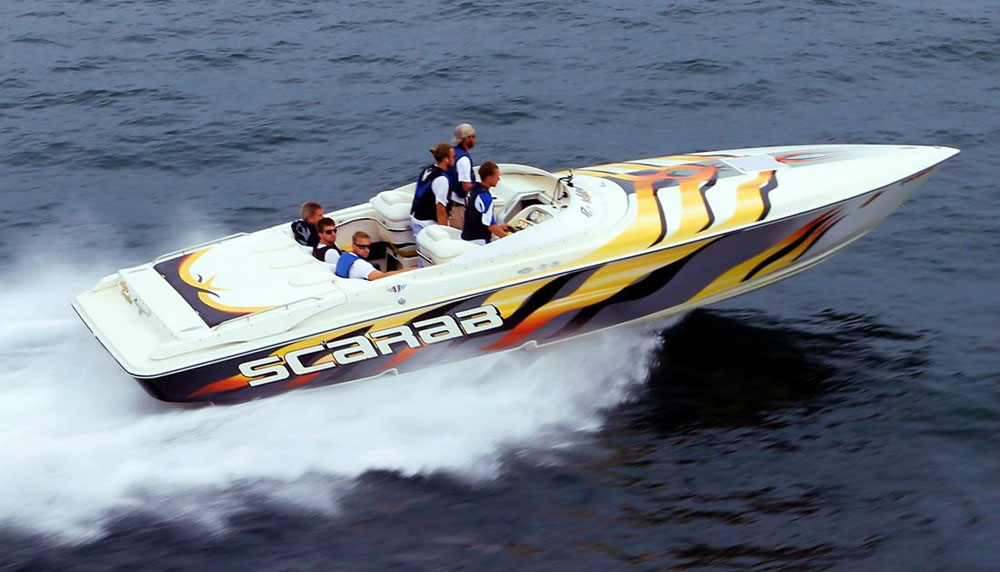 Chris Dekker, who drove his 33-foot Scarab in the 2014 Boyne Thunder Poker Run, is one of the founding members of the new West Michigan Offshore club.

Chris Dekker of Grand Rapids, Mich., bought his first go-fast boat a few years ago but it didn’t take him long to become immersed in the celebrated powerboating culture of Western Michigan. Now Dekker, who owns a 1999 33-foot Scarab with twin 600-hp WESCO Racing engines, is part of a new group dedicated to bringing area boaters together via their common interest.

With an official launch date of today, this first day of April, Dekker and four other volunteer board members—Jeff Tibbe, Derek Powers, Curt Watkins and Roger Zuidema—are excited to announce the incorporation of West Michigan Offshore, a nonprofit organization seeking to unite West Michigan’s countless go-fast boat enthusiasts both on and off the water.

Another West Michigan Offshore board member is Curt Watkins, who owns this stunning 50-foot catamaran from Douglas Marine/Skater Powerboats.

According to Dekker, the primary goal of the club is to give as much as possible to charity while providing members with connections in the industry as well as social events such as fun runs, raft ups and parties. The club currently has four members-only events (June 27, July 4, Aug. 15, Sept. 7) on its schedule for 2015, and Dekker said WMO also will take part in the Chase Charity Powerboat Event (June 12-14) in Muskegon, the Boyne Thunder Poker Run (July 10-11) and the Spring Lake Coast Guard Festival Raft Up (Aug. 1).

“From Muskegon, Grand Haven and Holland to Saugatuck, South Haven and Saint Joseph, there are a lot of boaters in this area and not a lot of organized opportunities for those boaters to get together,” said Dekker, who said the club is for anyone who enjoys performance boating whether they own a boat or not. “We hope to have a positive presence in West Michigan and help improve powerboating and the overall community on and off the water.”

Full membership for a year is $75 and $25 for an associate membership (non boat owners or friends/family of club members). Dekker said the dues will pay for things such as liability insurance for the board, T-shirts and other apparel, the club’s website, and other member perks.

“I need to thank Bob Barnhardt of Fort Myers Offshore and Steve McKie with Western New York Powerboat Association—they’ve been a huge help advising us how to set up West Michigan Offshore,” said Dekker, who also wanted to thank the following sponsors for their support: Aspen Investment Management, Boostane, Bultsma Construction, Manning Marine, Nautical Needle, Saber Marine, T&D Custom Painting, WESCO Racing Engines and The Wharf Marina. “We’re not planning to host any poker runs—our focus is mainly on social events and fun runs—but we’re definitely drawing inspiration from other clubs like ours.

And just like Dekker, the club’s other board members can’t wait to see what kind of response they get from their fellow boaters.

“I’m pretty excited about the club—it’s going to be good for the boaters of Michigan,” said Powers, who has owned a couple of Active Thunder models. “We have a lot of powerboaters in this area. I know a lot of the people because I’ve been boating here for many years but it’s always fun to meet new people with the same hobbies and interests. Basically if we can get boaters together to hang out and have a good time, do some fun runs and give back to charity, it doesn’t get much better than that.”