You are at:Home»Boating»Race On Saturday, Run On Sunday

Of all the catamarans that took to the water during last Saturday’s Offshore Powerboat Association Lake Race on the Lake of the Ozarks, the one that looked least like an actual raceboat took first-place in its class. Running on Mercury Racing Verado 400R outboard engines with 170 operating hours, a Performance Boat Center-owned Wright Performance 360 catamaran claimed victory in OPA’s bracketed Class 2 category, which is limited to a top speed of 105 mph, on the popular Central Missouri waterway.

But that’s not the cool part—or at least not the coolest part—of the story. A few hours after the race, Performance Boat Center principals Mark Waddington and Brett Manire hopped in the 36-footer and ran to the Camden On The Lake Resort for the awards ceremony.

The following morning, Waddington and his family used the boat, which has 4,000 miles on its hull, for a fun day of boating on the lake.

Getting the cat ready to race didn’t take much more than securing helmets and handheld radios for the Performance Boat Center cockpit duo of Rusty Williams and Craig Amptmeyer, as well as putting 34-inch-pitch propellers on its twin 400-hp outboard engines. As it does with all Wright Performance 360 models, Performance Boat Center painted and rigged the boat, and installed its interior.

“I was talking about it with Mark at dinner on Saturday night,” said Manire. “This outboard-powered sport cat segment—it’s just such a great thing to be a part of. We’ve had one boost hose go bad on us. That was last summer and it’s the only ‘mechanical’ problem we’ve had.

“We have big-power stern-drive boats in here—usually the same 12 boats—after every weekend for repair,” said Manire. “But this outboard power revolution, that’s what I’m calling it, with sport cats is incredible. It truly is stress-free boating.” 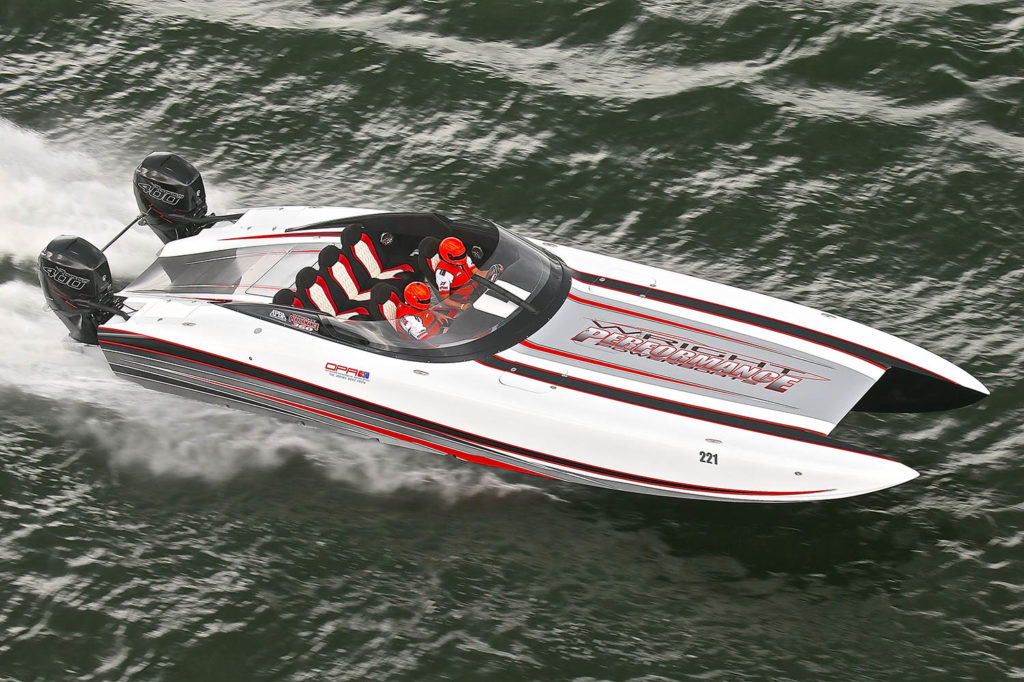