You are at:Home»Boating»The Joy of June

The Cigarette Owners’ Rendezvous is returning to Missouri’s Lake of the Ozarks for a second straight year thanks to the support of Performance Boat Center. (Photo courtesy Brad Glidewell.)

That was pretty cool news in my opinion, especially because June can be such a beautiful time of year on the scenic Colorado River-fed that borders Arizona and Utah. Recalling that the month of June is always a busy one for performance boaters—heck, I even wrote two OSO columns about it: No June Gloom Here and One Wild Weekend in June—I opened up the “Road Trip” story in the Speed On The Water November/December 2015 digital magazine (click the link to download the issue for free) that included an events calendar. 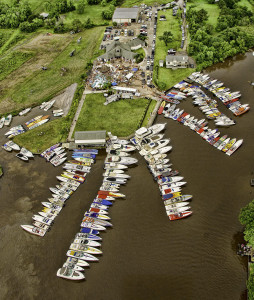 I counted 11 different poker runs—and that didn’t include a handful of events we didn’t know about when the issue went live, including the Lake Powell Spring Fun Run, the Cigarette Racing Owners’ Rendezvous (June 17-19) hosted by Performance Boat Center in Osage Beach, Mo., and the Jacksonville River Rally and Fun Run (June 9-11) that was recently revived by a few boaters who couldn’t stand to see it go. I’m also not counting any forms of racing, just recreational events. That’s a lot, and the best part is, most if not all of the events are worth attending.

Of course the big daddy event is the ninth annual Texas Outlaw Challenge (June 22-26), which closes the month of June over the same weekend as the popular Support Our Troops Poker Run organized by MidwestBoatParty.com on Missouri’s Lake of the Ozarks.

Earlier in the month, the Mississippi Gulf Coast will once again play host to the Smokin’ the Sound Poker Run (June 2-5) and the following weekend several Florida Powerboat Club members will head to the Bahamas for the Bimini Black Jack Poker Run (June 10-12).

That same weekend includes the second annual Erie Poker Run (June 10-12), which is organized by Elite Poker Runs, and the next weekend, smack in the middle of the month (June 16-19), features a few real cool events from New Jersey to Kentucky’s Lake Cumberland. The Atlantic City Powerboat Rally is expected to have a solid turnout for the 19th annual New Jersey Performance Powerboat Club event, and the team behind the Lake Cumberland Thunder Run is working hard to put together its best event yet on the popular Kentucky waterway.

A couple of states over in South Carolina, the Hartwell Lake Poker Run—a fundraiser for Meals on Wheels-Anderson—is taking place for the seventh straight year and organizers are expecting to top the event’s 2015 record-breaking totals of 190-plus boats registered and more than $60,000 raised.

I’m sure there are other events happening in June, too, but that right there is already a hefty list of options. Or, if you’re looking for something to do on a Wednesday in Michigan, the Lake St. Clair Powerboat Club will lend support to the 19th annual Lake St. Clair Fun Run (June 29) benefiting Special Olympics Michigan.