You are at:Home»Awesome»Haulover’s Grand Opening 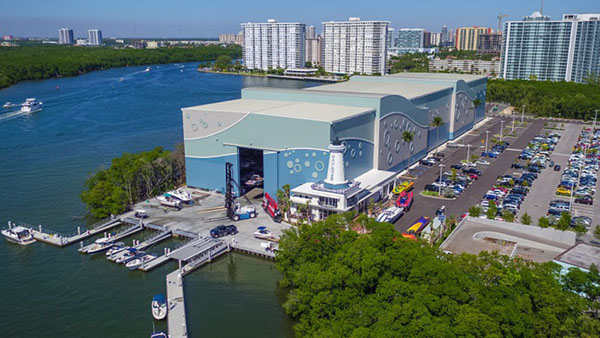 Whether you’re in the air or on the water, the new Haulover Marine Center in Miami is quite a sight. Photo courtesy Westrec Marinas

Thanks to a Grand Opening and Dedication ceremony held on Tuesday for the new Haulover Marine Center in Miami (read the story), my longtime colleague from Powerboat magazine and now speedonthewater.com, Ryan Johnson, was able to get a firsthand look at the grandiose $25-million renovation project located at Haulover Park.

Of course, as is the case with anyone who has visited the new Westrec Marinas facility since it’s soft opening in October, Johnson was impressed by the marina, the equipment, the storage capacity and the impressive boats that already call Haulover Marine Center home.

Currently at 80-percent capacity, according to John Louis, Westrec’s Southern regional manager, Haulover Marine Center hosted a sizable group of Miami-Dade County officials, including the director of Parks, Recreation and Open Spaces, and the District 4 commissioner.

“We saw a market that wasn’t being touched in this area and decided to put together a marina unlike anything else,” Louis said following the reception. “We’ve embraced the South Florida boat market, especially the go-fast ‘raceboats.’ The market is strong and we feel like our sales and service tenant — Larry Goldman and the team at Xtreme Powerboats — has brought a lot of that to the table. 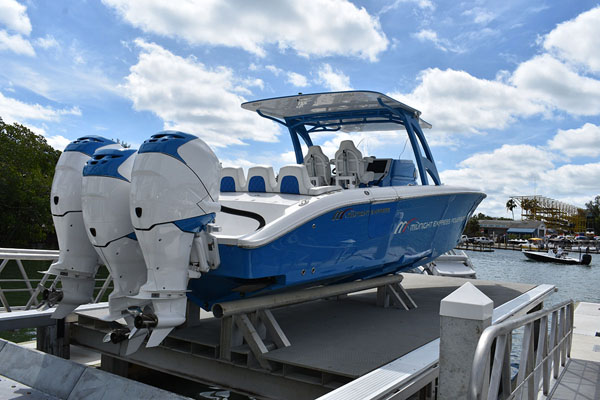 “We’re proud of the property but there’s more to come,” he continued. “Along with the five-tier dry stack housing for 508 boats, the two largest boat fork lifts in the world and the hydraulic elevator that lifts boats in and out of the water to assist with the launching operation, we have an amazing service center. We think we have something real special here.”

Louis said phase two of the marina—renovating the old Haulover facility across the way—is going to start at some point this year. He said phase two is likely going to focus on alternative watersports and personal watercraft since the current facility caters to larger boats.

Louis also hinted at some special events that could be hosted by the facility in the near future, including poker runs, offshore races and more. 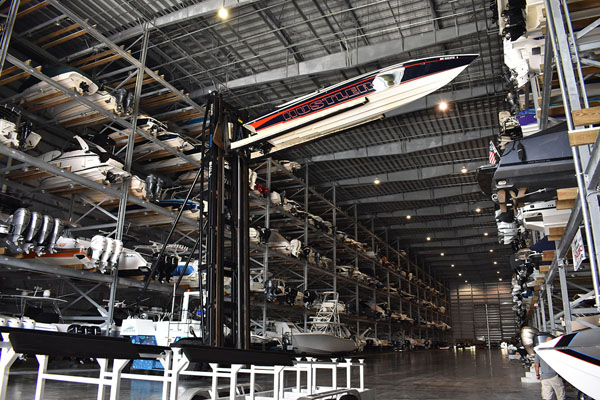 The massive new forklifts at Haulover Marine Center have no problem getting a Hustler Powerboats V-bottom off one of the top racks and getting it ready for its owner to enjoy a beautiful day on the water in South Florida. Photo by Ryan Johnson

“The Grand Opening ceremony, which included many of the people actually responsible for the building of this incredible facility, was awesome,” said Goldman, who entrusted many of his A-list clients, including Gino Gargiulo, the owner of the jaw-dropping Super Veloce G7 52-foot MTI catamaran, to leave their boats in the care of Goldman and Haulover Marine Center and put them on display during the community event. “But this was only the dedication ceremony — look out for the real grand opening party which is going to take place sometime later this year. It’s going to be over the top and is likely going to turn into an annual event that kicks off the winter boat season here in Florida.

“This place is amazing — it really is,” Goldman continued. “Westrec is a professional management company that has grown by acquiring and managing marinas around the world, and building its own facilities. We are going to make sure the service, sales and parts department fits right in when it comes to a high level of service.”

Goldman added that Haulover Marine Center is unlike any property he’s ever encountered, explaining that the new facility, which is rated to withstand a category five hurricane, includes a new boat launch area, a new bait-and-tackle shop, a new bath house, new landscaping, and a new 653-space lighted parking area for both marina and beach visitors.