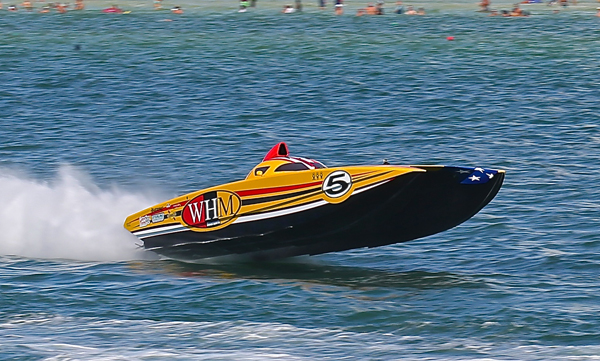 Despite that Clearwater is still recovering from Hurricane Irma, the SBI National Championships are still on. Photos by Pete Boden/Shoot 2 Thrill Pix.

If it weren’t the truth, no one would be able to believe the tragedy that’s befallen offshore powerboat racing this season. Two racers—David Raabe and Keith Holmes—died in accidents during events. Another competitor, Kyler Talbot, died from injuries sustained in a fall at his home in Bremerton, Wash.

Far less tragic but still indicative of hard times, Super Boat International dumped its Marathon, Fla., contest this year—though it wasn’t a great loss to race teams or fans—and went down to a four-race regular season. While the Offshore Powerboat Association added a race—the Bimini World Resorts Grand Prix—a high-seas forecast brought on by Hurricane Irma forced the organization to cancel its Maryland race for the second year in a row. And that was in addition to the two events cut short by the above-noted fatal incidents.

Of course, the woes of offshore racing this year didn’t confine themselves to domestic competition. Lacking a promoter, the Union Internationale Motonautique Class 1 circuit didn’t even have a 2017 season, save for one race in Italy scheduled for the end of the month.

And just when you thought this season couldn’t get more complicated on the domestic front, a new American Power Boat Association-sanctioned organization—Key West, Fla.-based and Race World Offshore—announced that it has decided to enter the fray and compete for this decidedly scorched bit of motorsports earth next year. I don’t know if Race World Offshore is a good thing or a bad thing—no one does. It’s just another wrinkle in a story that no one would believe if it weren’t true.

You almost don’t dare ask yourself how things could get any worse. Because the way it’s gone this year, you could find out.

You know what? I’m going to take the contrarian—go figure—point of view. I’m going to say that despite a horrendous season so far, offshore powerboat racing is positioned to enter one of its finest hours, ever.

First, the SBI National Championships are on for Clearwater, Fla., in two weeks. Clearwater took a beating from Hurricane Irma, and yet the people there want the races back. Maybe it’s about returning to normalcy. Maybe it’s about bringing in revenue at a time when revenue would come in handy for a city trying recover from a natural disaster.

Who cares? Whatever the motivation, that was a decision for Clearwater to make. My hope is that to thank the people of Clearwater, the entire offshore racing community, meaning teams and fans, turns out en masse to support the event.

What happens on the racecourse in Key West this year will be secondary to the support demonstrated by a strong showing of race teams and fans.

Same goes for the SBI Worlds in Key West. Earlier this week the organization announced that event would go on as scheduled, as did the Florida Powerboat Club with its annual jaunt to famed city at the end of the road. So those of us committed to going need to still go, and those of us who are still undecided might as well hop off the damn fence and go. And to express our gratitude for the opportunity, let’s spend some silly money there. Hell, we’ll be in Key West. It’s not like we’ll have a choice.

Also, once we’re there? No bitching about the few hassles and glitches we’re likely to encounter in a city rebuilding from a Category 3 hurricane that pummeled it just a couple of months back. If you feel the need to gripe about something in Key West this year being less than it once was, shut up and order another adult beverage. Repeat as needed.

Thursday night’s Offshoreonly.com/Speedonthewater.com Key West party at the Sandbar Sports Grill is most definitely still on, and we’ll be looking not just to show you all a great time but raise money for Samuel’s House, a local shelter for abused women and children. Making that donation huge this year is yet another way we can thank the people of Key West for having us in town.

You know that the Florida Powerboat Club’s fleet of high-performance catamarans, V-bottom sportboats and center consoles at the docks in front of the Conch Republic will be world class, and that—at least when it comes to mingling with the biggest names in the go-fast boating community—the FPC Poker Run Village will be worth more than a few visits. You know that even a waterlogged Duval Street is still, well, Duval Street.

What happens on the racecourse matters, of course, but that’s out of your control. You know that the Superboat-class competition in Key West will be close, as it also likely will be in the Superboat Vee class. You have to hope that the CRC/Sunlight Supply, Miss GEICO and Alex And Ani teams show up to take on Wake Effects, the odds-on favorite to claim the Unlimited-class world title for the second consecutive year, and that AMH Construction/Instigator and Outerlimits will continue their close competition in the Superboat Extreme ranks.

But for the first time since I started covering this sport in 1995, what happens off the racecourse in Clearwater and Key West matters more to offshore racing than what happens on it. Whether you’re a competitor or a fan, the 2017 season has been heartbreaking. A strong finish makes a strong statement, and we might just have the opportunity to close out the year with big racer and fan turnouts in two towns on the mend.

That won’t erase the tragic losses of Raabe, Holmes and Talbot. But a strong finish of the 2017 offshore racing season honors their memories and shows hope—rather than hopelessness—for the future.