You are at:Home»Classes»Stock Class Rules: Here’s Why 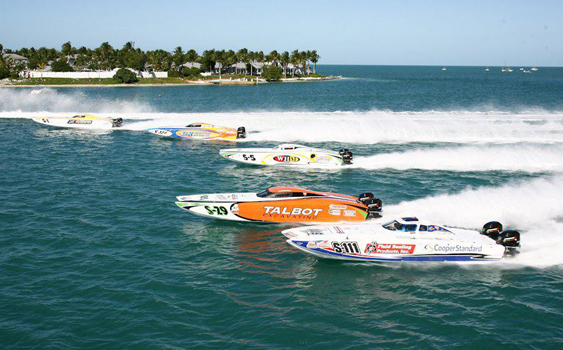 In the 2012 offshore racing season, the Stock class has consistently attracted five- to seven-boat fleets and tight competition.

Back in the day—a phrase that ensures you’re in for a nostalgia trip—outboard engine power ruled the offshore racing world. In 1985, for example, it was common to have as many as 15 outboard-powered 24-foot Skater catamarans in the Stock class of an offshore race. For anyone who has followed the sport during the past 20 years, that’s hard to imagine.

And still, in a sport currently littered with one- to three-boat classes with ever-changing rules and specifications, the Stock/Super Stock class in Super Boat International, Offshore Powerboat Association and Offshore Super Series competition consistently fields five- to seven-boat catamaran fleets with deck-to-deck racing.

“Basically, we have been running the same motor-and-hull figuration since 1998,” said Ryan Beckley, who has been racing offshore for 19 years, ran his first Stock class race in 2000 and throttles his own cat, the 30-foot Skater DoubleEdge Motorsports, with rotating drivers Ryan Slater and Chris Schoenbohm. “We’ve been just about the most consistent class [in terms of fleet size]this year. Super V Light has been pretty consistent, but they allow two different motors and there has been some disagreement [among the class competitors]around that. Our class and Super V Light also support all the racing organizations.”

Stock class is simple, canopied (SBI allows open cockpits in Stock but “no one runs them,” said Beckley) catamarans from 28 to 32 feet powered by twin 280-hp Mercury Racing 2.5-litre two-stroke outboards. Under OSS and OPA rules, the engines have to remain completely stock. SBI rules allow competitors to change the rev limiters in their engines. 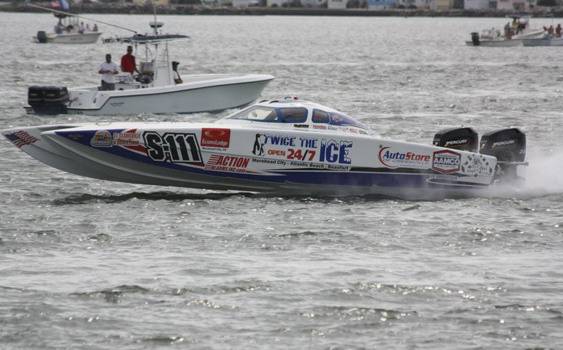 Beckley, who has been offshore racing for 19 years and got his first Stock class ride in 2000, campaigns this 30-foot Skater cat.

“Mercury put a whole lot of development into that motor and limited it at 8,200 rpm,” said Beckley. “Some guys turn up the rev limiter, but that’s when stuff starts to break. I have always run the stock rev limiter.”

The perception that 2.5-litre engines frequently break down is, according to Beckley, incorrect. Of course, as with all engines used in racing applications, failures happen. But in Stock class, at least they are not economically catastrophic.

“The Stock class is pretty economical,” he added. “For what it costs to build one turbine boat, you could build five Stock class boats.”

Still, like the high-performance powerboat world itself, offshore racing has continued to head in the big-block-and-stern-drive direction. That makes sense given that recreational go-fast offshore boat owners today are more familiar with big-block/stern-drive propulsion packages, and present and future offshore powerboat racers most often come from the recreational ranks. Still, the Stock class continues to hold its own and has consistently seen double-digit fleet sizes overseas in its X-Cat counterpart under the Union Internationale Motonautique umbrella.

Beckley, who lives in Sarasota, Fla., has competed in two X-Cat races as a driver with Stock-class throttling legend, and multi-time world champion, Gary Ballough. Yet he has no aspirations of jumping domestic ship and heading abroad to try his luck. He says he is committed to helping solve the problems of offshore racing at home.

“There are too many classes, and too many organizations willing to make new classes for people with a lot of money,” said Beckley. “And there are too many races scheduled on top of one another. There will always be more than one racing organization. They just have to work harder to schedule races on top of each other.”

By the time the 2012 SBI Key West Offshore World Championships come around in mid-November, Beckley will have competed in ten events this season. Though he describes it as “a lot” of races, his passion for the sport and particularly the Stock class never wanes.

“It’s kind of a diehard, non-conformist class, sort of with the Motocross or Supercross, two-stroke mentality if you know what I mean,” he said. “Once you get in one of these boats, you’re hooked.

“And the camaraderie of our class—it’s a really great bunch of guys,” he adds. “You need a powerhead? Someone to go with you to Skater for repairs because you flipped your boat? Any one of them will bend over backward to help the next guy.”