You are at:Home»Commentary»Commentary: There’s Always One 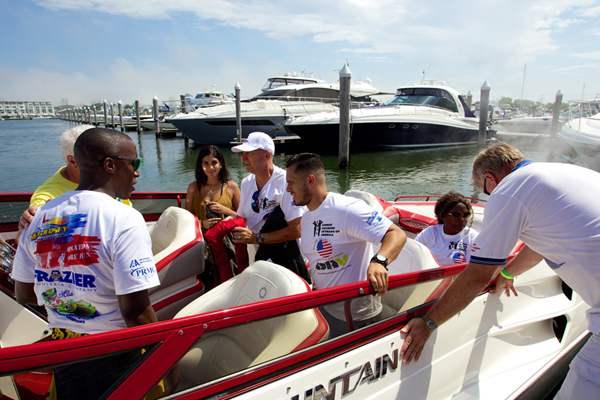 As in years past, Operation Shore Fun provided powerboats for veterans injured serving their country. Photo by Tim Sharkey/Sharkey Images

For the fourth rear in a row, longtime marine writer Tony Esposito covered the New Jersey Performance Powerboat Club’s Atlantic City Rally for speedonthewater.com. Per event tradition, Saturday’s free powerboat rides for veterans, many of them injured in combat, and their families, followed Friday’s on-water jaunt from Toms River to the Golden Nugget Resort and Casino host venue. Called Operation Shore Fun by NJPPC president Dave Patnaude, the boat rides for veterans are an essential part—maybe even the most essential part—of a fine weekend.

An outdoor café overlooks the dock area where the veterans, with help from volunteers, board and debark for powerboats rides. The rides began in the mid-morning and ended in the late afternoon. According to Esposito, everyone from the veterans to the boat drivers was delighted with the way things went.

Strike that. Everyone wasn’t delighted. In fact, one man who approached Esposito was downright annoyed with the engine noise coming from the powerboats as they idled while they picked up and dropped off their passengers—many of whom had to be picked up themselves to get in and out of the boats—at the docks.

“I had an NJPPC shirt and hat on so I guess I looked ‘official’—or I was just the closest person,” said Esposito. “So this gentlemen in the restaurant comes up to me and asks, ‘Is there a reason they have to leave those things on while they’re loading? Why can’t they just shut them off?’”

The man in question returned to his seat in the outdoor café—but not for long.

“He came back again and complained,” said Esposito, laughing hard. “Most people would have been embarrassed enough, based on what I told him it was all about, to go sit down and stay there but not this guy. I was with a bunch of people from the NJPPC, and we all just stood there looking at one another. We couldn’t believe it.

I’m not sure I would have been as gracious. I might have reminded the man that noise emitted by a powerboat at idle is far less than that of an IED blowing up a Humvee full of soldiers in Afghanistan—you know, the kind of folks who protected his right to bitch about engine noise during a Saturday breakfast on the waterfront.

But Esposito kept his cool.

He is correct, of course, there’s always one. Thank heaven there aren’t more.