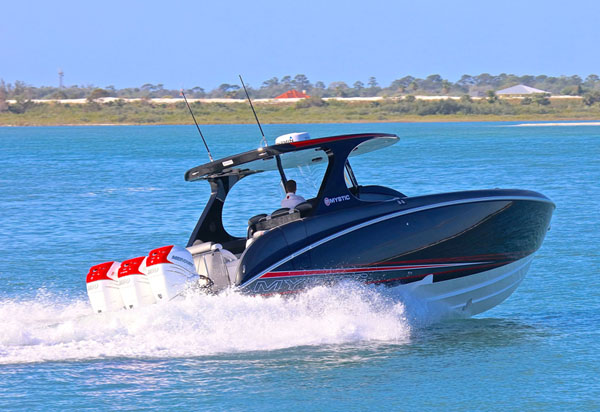 Right now, there’s a 60-foot center console bound for the Middle East in the paint booth at Stephen Miles Design in Owensboro, Ky. The 60-footer tops the designer/painter’s prior largest powerboat canvas — a Mystic C5000 catamaran in Trinidad — by 10 feet. But anyway you look at it, that’s a lot of boat to paint and a long way to come for a guy who started his career in 2009 painting radio-controlled model boats in the 60- to 92-inch range.

Miles, who began painting for Outerlimits in 2014, chuckled at the disparity and — in his typical Southern gentleman fashion — downplayed the challenges of designing and executing graphics on the massive center console.

“It’s really not that bad,” he said, then laughed softly. “I guess the biggest challenge is moving the boat around the shop because it’s so big, but other than that it’s been pretty easy. It’s actually a very light, foam-cored epoxy center console.”

These are busy times for the 44-year-old guy behind Stephen Miles Design, which has joined the ranks of Boat Customs, The Art Of Design and Visual Imagination as one of the top powerboat painting shops in the country. In addition to the Mystic M4200 luxury center console at the shop — Miles and his four-person crew have painted seven M4200s to date — Miles has new SL 44 and SL 52 models heading to his facility in the next two weeks. Less than a month ago, he completed the paintwork on Chad and Heather Collier’s much-anticipated, one-of-a-kind Mystic C4400 catamaran.

But wait, there’s more. Miles also just finished touch-up work on the first outboard engine-powered SL 41 (read the story in this issue of Speed On The Water digital magazine) and is doing similar sprucing up of another SL 41. 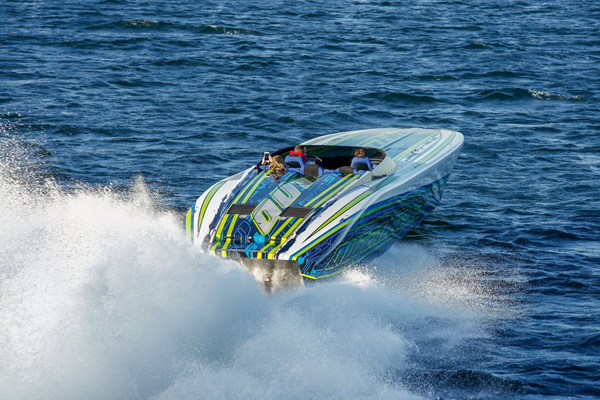 While he won’t go into detail, he said that the paintwork on the new SL 52 will incorporate paint technology that’s “never been done before” in the powerboat world.

“It’s going to be a very cool project,” he said. “We actually have an outside contractor coming in to help us with the application of the technology.”

But Miles, who confessed to having the same pressure and stress inherent in all small and relatively young businesses but still loves what he does for a living, doesn’t necessarily need something “new” to stoke his creative fire.

“We have a 2011 Skater 388 cat coming in soon,” he said. “It’s owned by Gary Smith and he bought it from Performance Boat Center. He likes the paintwork on the deck, but can’t stand it on the hull sides. I’m really excited about it. I have painted a few RC Skater catamarans before, so I have a soft spot in my heart for them, but I’ve never painted a real Skater before.”

To accommodate his growing business, Miles currently is expanding his facility so that it will have two complete paint booths. The expansion isn’t finished, but the Stephen Miles Design team already is making good use of the new space, he said. While the company definitely needs more capacity, its namesake is trying to grow it slowly—without taking on debt.

“One of my biggest cautions since day one has been to not grow too fast,” he said. “I see that happen all the time, and people get over their heads.”

“I am deadline oriented and I have a sense of urgency, but the quality has to be there,” he said. “I want to see my work on a lot of different canvases, but at the same time I know I don’t want to grow too fast.”

Moving forward, Miles would, of course, like to continue painting new boats, as well as bring older models back to life.

“There is a lot of new construction going on with center consoles,” he said. “They are the future, and I think that’s really cool. But I also learned a lot from painting Jeff Hoefling’s green 42-foot Fountain, and I see opportunity there. There are a lot of older boats out there in good condition that could use an updated look. I’d like to do more than that.”

Asked if he has an end game or exit strategy for his thriving business, Miles chuckled.

“My end game is to retire,” he said. “But that’s not going to happen anytime soon.