You are at:Home»Community»Once In A Lifetime 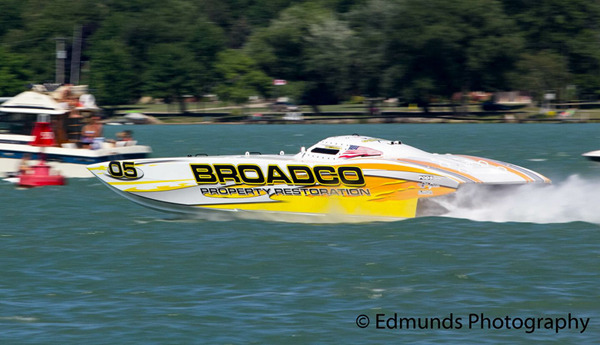 Broadco’s return the racecourse last weekend was a dream come true for Chuck Broaddus and his wife, Kellie, who shared the cockpit. Cody Edmunds/Edmunds Photography

After a solid five-year run that included a Super Boat International Superboat-class world championship in 2014, Chuck Broaddus, the owner/driver of the Broadco offshore racing team, and his wife, Kellie Hibdon-Broaddus decided they were done with the sport. So at the end of the 2015 season they put their 40-foot Marine Technology, Inc., catamaran with 750-hp Ilmor Racing engines and the rest of their racing equipment up for sale.

That was the easy part. Taking leave of the many friends they made during their offshore racing pursuit—not to mention all the family members who worked on the Broadco team crew—has proven more challenging. The MTI, which has not yet sold—no surprise given the somewhat limited demand for offshore raceboats these days—and is housed in storage facility not far from their home in St. Clair Shores, serves as a bittersweet reminder of the extended offshore racing family they’ve mostly left behind.

Late last week, Chuck and Kellie headed to nearby St. Clair to catch up with their many offshore racing friends at the Offshore Powerboat Association St. Clair River Classic. And per tradition, they ended up at the Murphy Inn with a large group on Friday night.

“As I have several times for the last year and a half, I started talking about the potential of bringing the boat out for a run while we were on our way to St. Clair to meet up with some racing families,” said Broaddus. “Kellie’s immediate response, ‘Absolutely not,’ was like it always is. She is all about preserving the engines and so on so we can sell the boat, and I sometimes don’t think about those things.”

Broaddus paused and laughed. “I kind of suggest it just to get a rise out of her,” he said. “Anyway, as the night progressed while trading old stories with friends, we started getting pressure to run it. About halfway through the evening, Kellie said she would consider it—but only if she got to drive. Our one regret during the years we ran the team was that she had never gotten behind the wheel. We’d also wanted to run the boat with each other but it never came together.”

“It was the usual thing at Murphy’s Inn,” said Hibdon-Broaddus, picking up the story. “Everybody was giving us a hard time saying, ‘You need to put that boat in the water,’ and I was like, ‘No, that’s not happening, we just want to sell it.’ But Ed Smith, Jay Muller and Marc Granet were in my ear. And I left thinking, ‘OK, we’re putting the band back together.’ But I’m driving. And Jay Muller is going to teach me.”

Unbeknownst to his wife, Broaddus set a plan in motion that evening, starting with asking his son to load up the team’s 26-foot trailer—the Broadco hauler had been sold—with everything they needed for a race weekend and bring it to St. Clair. Still, when they woke up the next morning at their home Broaddus wasn’t convinced that his bride was onboard. 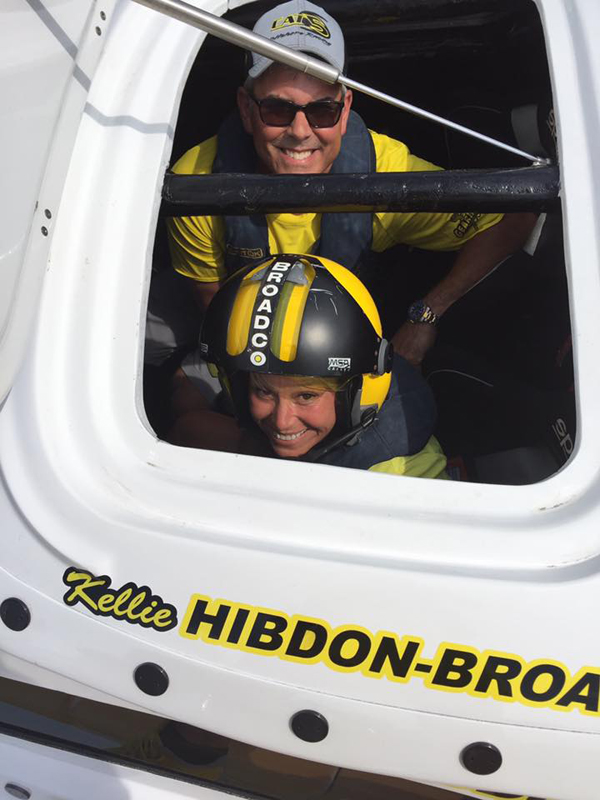 Said Kellis Hibdon-Broaddus: “I told Chuck that I couldn’t take my hands of the wheel to hit him, but I could kick him.”

“Lo and behold, at 6 a.m. on Saturday morning Kellie is nudging me and saying, ‘I thought we were going racing today,’” he said.

They rallied the team and attended their first drivers’ meeting as a couple, and by Saturday afternoon the boat—after longtime family friend Frank McComas of Scorpion Enterprises inspected the engines and gave them the thumbs up—was ready for its first test session. The original plan was for Muller take out Hibdon-Broaddus and get her comfortable behind the wheel before her husband joined her in the cockpit to throttle. But an incident on the racecourse delayed getting the Broadco cat into the water, so there only was enough time for Muller to share the cockpit with his new student driver.

The former owner of a 28-foot Sunsation sportboat who “grew up on the water” with her family, Hibdon Broaddus was no stranger to running powerboats—she’d even logged many hours behind the wheel of her husband’s 40-foot Formula cruiser. But she’d never driven a canopied offshore racing catamaran.

“Jay was great—he was so good with me the whole time,” she said. “I have to admit I was little nervous because I didn’t know what to expect. But he told me where to turn, where my lines were and we got to 125 mph. You couldn’t tell it was that fast. You couldn’t feel it at all.”

The husband-and-wife team climbed into the Broadco cockpit together for the first time on the water on Sunday afternoon, shortly before their race began. They were the only team running in the Super Cat class, and their plan was to stay on the outside of the course and away from the competitors in the other classes. If for any reason they decided to stop racing early, they would pull into the center of the course.

“Again, I was a little nervous until we got into the raceboat,” said Hibdon-Broaddus. “I had total confidence in Chuck. I knew he wouldn’t do anything to put us in jeopardy. We did well. We stayed on the outside as we planned.”

Broaddus laughed again. “After I set us up for the first turn, Kellie said, ‘You don’t have to slow down that much,’” he said. “When we came out of the turn, she said, ‘You’re going to need to go a lot faster in the next turn.’”

Hibdon-Broaddus also chuckled. “I told Chuck that I couldn’t take my hands of the wheel to hit him, but I could kick him,” she said.

The husband-and-wife duo completed a lap-and-a-half before the accident that claimed the life of veteran offshore racer Keith Holmes led to the cancellation of the race. But they had realized a long-held dream that always will, despite the day’s tragic ending, hold a special place in their hearts and minds.

“It was great being in the boat with Chuck,” said Kellie. “We bonded even more in our friendship and in our marriage.”

Much as the couple and their family-crewed team enjoyed their St. Clair racing adventure—and the sight of Kellie picking up her first checkered flag—the Broadco MTI catamaran and the rest of its associated equipment is still for sale.

“Yes, it’s all still for sale,” Broaddus said, then chuckled. “The price might have gone up, that’s all.”