You are at:Home»Community»Plan On Key West

I have a love-love relationship with Key West, Fla., a place I’ve visited more than 20 times during first full week of November. After a year away, I always love revisiting the place.

And after a week there, I absolutely love leaving it. 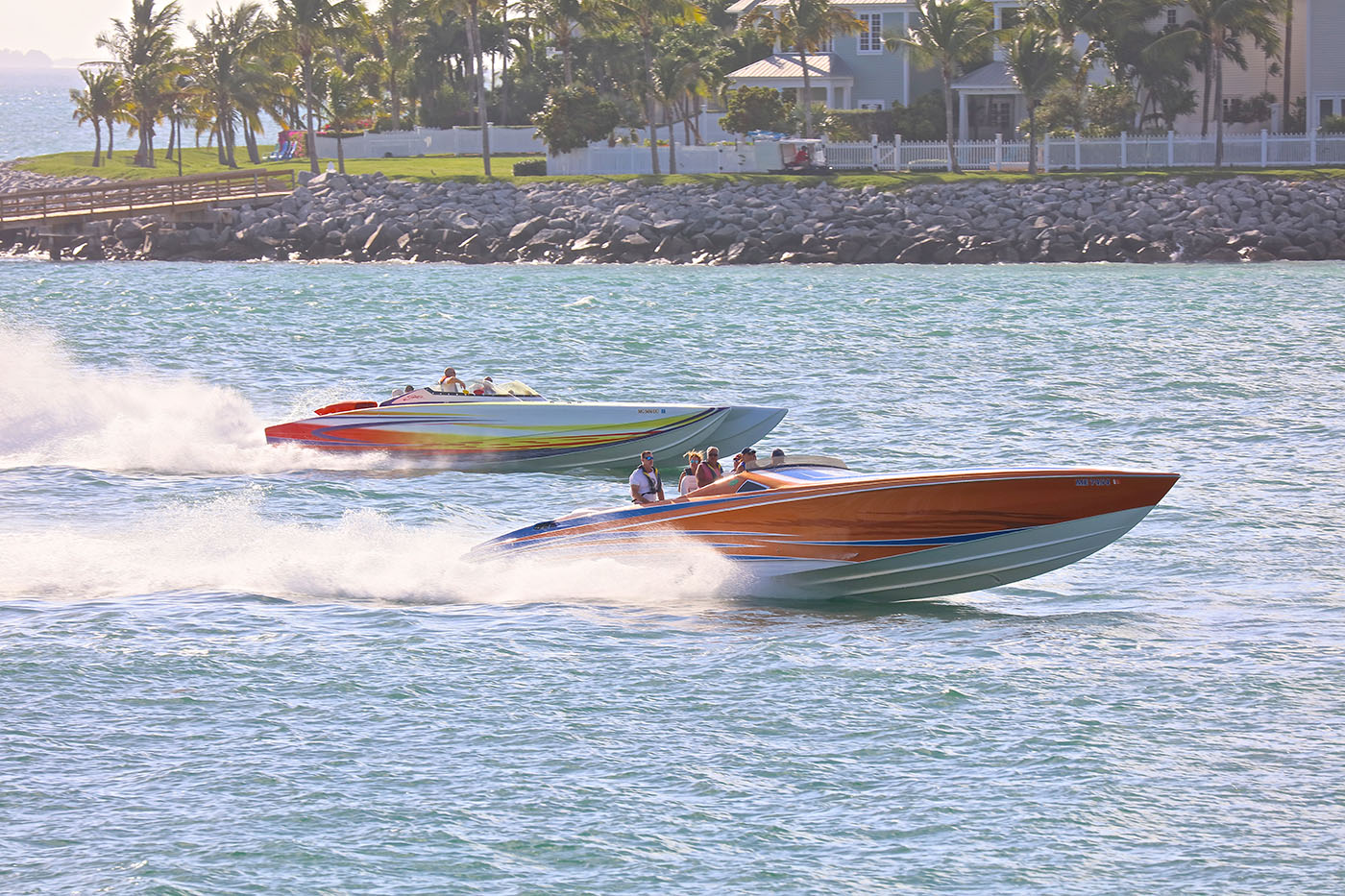 Look for the Florida Powerboat Club to attract some of the finest go-fast powerboats in the country to its Key West poker run and you will not be disappointed. Photo by Pete Boden/Shoot 2 Thrill Pix.

Key West can be a little overwhelming and—at least if you’re there to work—more than a little distracting. As a matter of self-preservation, I tend to hide from the nightly madness of Duval Street in favor of quiet dinners with friends and colleagues. As noted above, I’m there to work.

Jason Johnson, my fellow offshoreonly.com columnist and speedonthewater.com co-publisher, and I will be there this year to cover the offshore powerboat races, which will be produced for the first time by Race World Offshore. Despite the unfortunately prolonged uncertainty earlier this year around which organization—the Offshore Powerboat Association and Powerboat P1, Race World Offshore or Super Boat International—would be awarded the five-year contract for the three-race-day event, that always was our plan.

Whether the fleet is large or small, Key West during the first full week of November offers a lot more than offshore racing. Key West is the destination for the Florida Powerboat Club’s signature poker run and the site of organization’s joyful poker run village. Key West is the home for the annual Speedonthewater.com/Offshoreonly.com Thursday night welcome bash and auction, which from my unflinchingly biased point of view is the best party of the week. (And it’s a celebration that benefits a great cause, as proceeds from the event go to Samuel’s House, a local charity that serves women and families in need of a safe living environment.)

With RWO producing the Key West races for the first time and more than a little friction between that organization and the combined OPA and P1 groups, which are producing the inaugural six-race American Power Boat Association Offshore Championship Series, I’ve been getting a lot of questions regarding the fleet size and classes that will compete in Key West. Those are fair questions.

Here is what I feel confident reporting.

Larry Bleil, the head of RWO, is expecting approximately 40 boats, and that seems like a reasonable-to-optimistic estimate. I have been told by multiple reliable sources that most—if not all—of the Supercat and Super Stock class teams will be there, and I have no reason to doubt that. In the Class One ranks, the Miss GEICO team has confirmed more than once that it will not compete in Key West. Nor will the 222 Offshore or Victory outfits.

As for the canopied single-engine V-bottom class, I have no solid grasp of what the turnout might be. But from what I’ve been told by a few racers, that fleet could be meager. Production classes? No clue.

The American Power Boat Association-sanctioned RWO event in Clearwater, Fla., at the end of this month may foreshadow what offshore racing fans can expect in Key West. With eights boats in the field—and none in the same class—for its Dunkirk, N.Y., contest, the organization didn’t inspire confidence in its ability to attract teams. But to be fair, the Dunkirk race followed on the heels of back-to-back APBA Offshore Championship series contests, and Lake Erie in New York is not Florida—much less Clearwater or Key West—when it comes to offshore racing on more than a few levels.

On the Florida Powerboat Club poker run side of the Key West equation, expect 150 to 200 boats and you won’t be disappointed. The FPC never fails to attract an outrageous fleet to its final event of the year.

But Key West during the first full week of November presents more than the Florida Powerboat Club’s annual season-ending event and three days of offshore racing. Key West that week is a fitting finale for any given year in the go-fast boating world. It’s a great way to hang out and say goodbye, at least for the holidays, to longtime friends, as well as whatever new ones you made during the week.

So plan on Key West. Because whatever happens on the racecourse during the week, it’s only part of the action. Endlessly curious and a creature of tradition, I can’t wait to be there.

But I also know that by the time it’s over, I’ll be more than ready to leave.