You are at:Home»Customization»Boat Customs: The Name Says it All

As presenting sponsor of SuperCat Fest in August, Boat Customs brought the beautiful Mystic catamaran to the event at Lake of the Ozarks in Missouri. (Photo by Jay Nichols/Naples Image.)

With a few exotic, high-end projects popping out of the Boat Customs Custom Paint & Design shop in Caledonia, Mich., over the past couple of years, the company, founded by Chris Mills in 2003, is starting to turn heads nationwide. For his most recent project, Mills took a bare hull and deck from Mystic Powerboats and turned it into the radical six-seat catamaran owned by Tom Borisch, Mills’ partner and director of business development.

Making its debut at the Boyne Thunder Poker Run on Lake Michigan in July and wowing onlookers a month later during the SuperCat Fest that coincided with the Lake of the Ozarks Shootout in Missouri, the C5000 pleasure catamaran—Mystic’s first with twin Mercury Racing 1350 engines—was stunning to say the least. For one of its first high-performance creations (the company also did the rare 488 V-bottom from Skater Powerboats that Borisch built and sold after just 10 hours of use), Boat Customs nailed the catamaran.

So much so that Mystic owner John Cosker called the boat “gorgeous.”

“Chris, Tom and everyone at Boat Customs did a great job with the boat—it’s beautiful,” Cosker said. “We haven’t got a lot of time in it still. We ran it in Boyne Thunder and we had technical issues that kept us off the water at the Shootout.” 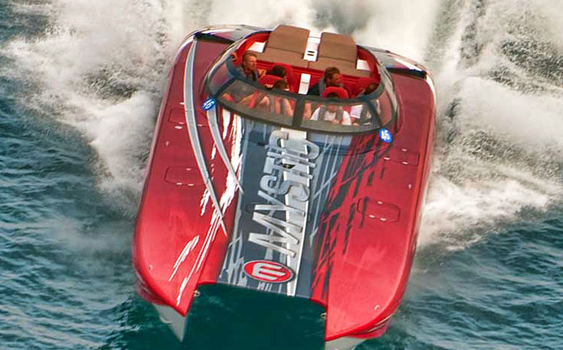 Completed from a bare hull at Boat Customs in Michigan and powered by twin Mercury Racing 1350 engines, the Mystic Powerboats C5000 pleasure catamaran made its debut at the Boyne Thunder Poker Run. (Photo by Jay Nichols/Naples Image.)

Between Mills and six skilled workers at Boat Customs’ 12,000-square-foot facility, the boat’s rigging, paint, interior and custom fiberglass modifications were completed in-house. Mills, who handles the artwork design and application in a 27-foot-by-60-foot cross draft spray booth with capabilities of baking at temperatures above 160 degrees, said he loves being involved in the overall design of the boat, and one day hopes to be able to build his own.

Living in the present, Mills called Boat Customs a “one-stop hot rod shop” for boats, explaining that the company customizes boats—new and old—for a variety of budgets and carries out everything from gelcoat and graphic repair to hull blueprinting. 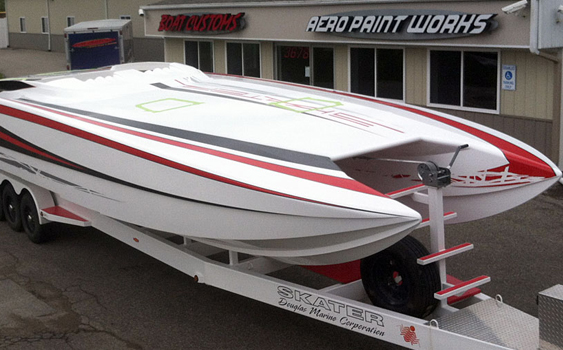 The latest project from Boat Customs is a new 388 Skater catamaran, which will be powered by a pair of turbocharged Mercury Racing 1350 engines. (Photo courtesy Boat Customs.)

To emphasize his point, Mills said he is finishing a spanking new 388 Skater catamaran with twin Mercury 1350s while also tackling the restoration of a former offshore race boat, the Don Q Rum 32 Skater, which is being set up for pleasure use minus the canopy. He’s quick to point out that Boat Customs can work on anything from Fountains to Cigarettes to Nor-Techs, and smaller boats as well. He’s even painted a few helicopters.

“We’d like to build [and sell]another Mystic for sure, but we have other projects to focus on in the meantime,” said Mills, who sharpened his craft working on projects with Peter Hledin and Douglas Marine, the manufacturer behind Skater Powerboats. “I have to give a lot of credit to Tom [Borisch]. Without him, I wouldn’t have the opportunity to do these amazing projects and showcase our talents.”

While producing a Mystic a year is a goal for Borisch and Mills—Borisch’s current one will be on display and for sale at the Miami International Boat Show in February—that isn’t a top priority. For now, Mills said he plans to keep learning and doing better work each time around.