You are at:Home»Engines»Mercury Outboards By The Numbers

On the heels of the Miami International Boat Show this month, a Mercury Marine press release from the company last week about its increased  outboard engine presence at the annual event caught my eyes. For a very brief moment, I read the release incorrectly, thinking it stated that Mercury Marine and Mercury Racing had a total of 200 outboards on display at the event. Heck, I thought, that can’t be right. Among four boats alone, Cigarette Racing Team had 19 outboards in its exhibit. 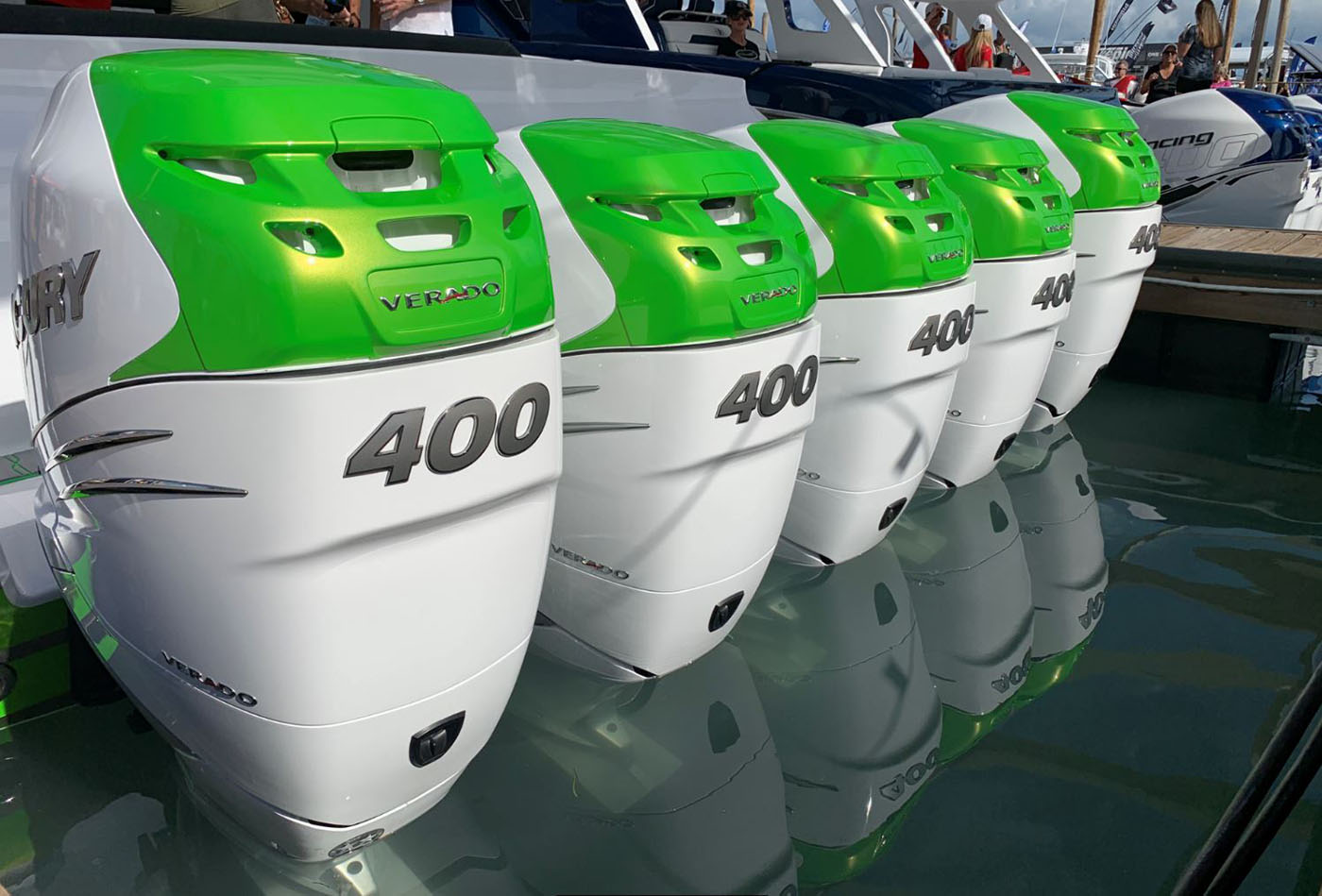 Upon a closer read of the release, I learned that the 200 outboards in question represented a 7-percent increase above the total number of Mercury Marine/Mercury Racing displayed at last year’s Miami Boat Show. That means, I also learned after dusting off some basic high school algebra, that the Fond du Lac, Wis., companies had close to 2,900 outboards at the docks and in the tents during the Miami event this year.

And that got me thinking some more. If Cigarette had the most Mercury outboards, primarily Mercury Racing Verado 400Rs for the record, which company or companies in the high-performance powerboat segment had the least? That was easy. With the Mercury Racing 1550/1350 stern drive engine-powered Crypto SV 43 V-bottom and its 1350/1100 Jet SV 46 catamaran, Outerlimits had no outboard engines in its display of canopied carbon fiber beauties.

With a Mercury Racing 1350-powered 388 catamaran and a 368 cat powered by 1100s, Skater Powerboat also flew no outboards in Miami. But those Outerlimits and Skaters were the exceptions to rule proved by Deep Impact, Iconic Marine Group’s various Fountains and Donzi offerings, MTI, Mystic Powerboats and Nor-Tech, all of which had almost nothing but outboard-powered models on display.

“We are pleased with our presence at the Miami Boat Show, one of the world’s marquee marine events,” said John Pfeifer, Mercury Marine president, in the release.  “Our new V-6 and V-8 engines, as well as the newly released (Mercury Marine) 400-hp Verado were all well represented.” 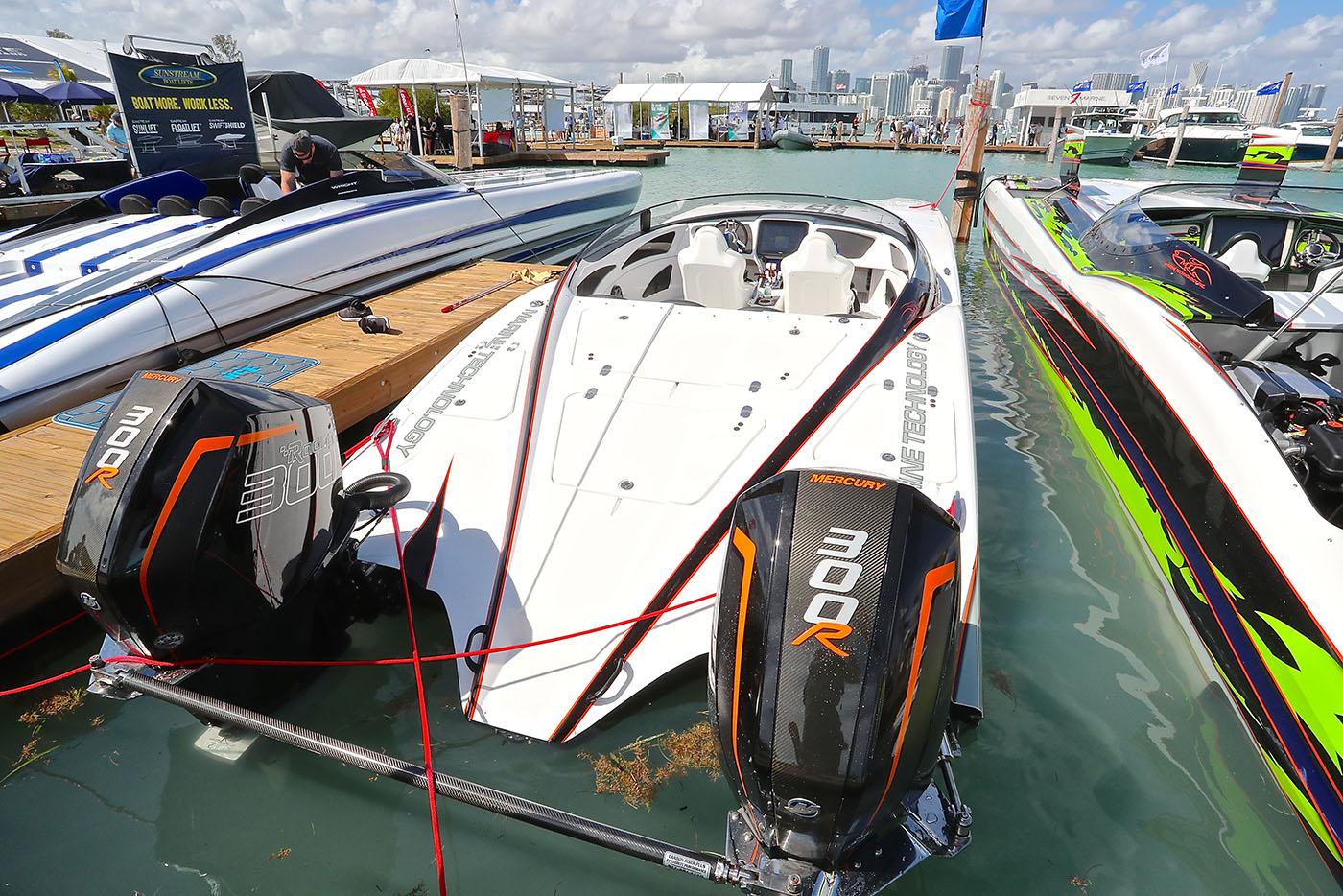 Pfeifer’s understatement made me smile. To say that Mercury’s outboards were “well represented” at the Miami event this year was akin to saying that automobiles were well represented on the causeway leading to Virginia Key and Miami Marine Stadium, the venue for the show since 2016.

But here are a few more new-for-2019 numbers the press release didn’t include that are a lot more relevant for those in the market for Mercury Racing 250R, 300R and Verado 400R outboards this year. While their standard three-year warranties are unchanged, buyers can add up to five years of Mercury Product Protection for all three of those engines.

“The end result is you can now have up to eight years of total coverage for the consumer Racing outboards, just like the main plant product,” said Steve Miller, the company’s director of sales, marketing and service.

And like the number of Mercury Marine and Mercury Racing outboards in Miami this year, those are some mighty impressive numbers.