Dave and Buffie Megugorac of Southern California have been attending the Desert Storm Poker Run in Lake Havasu City, Ariz., for close to 10 years but they’ve never experienced it quite like they did last week. 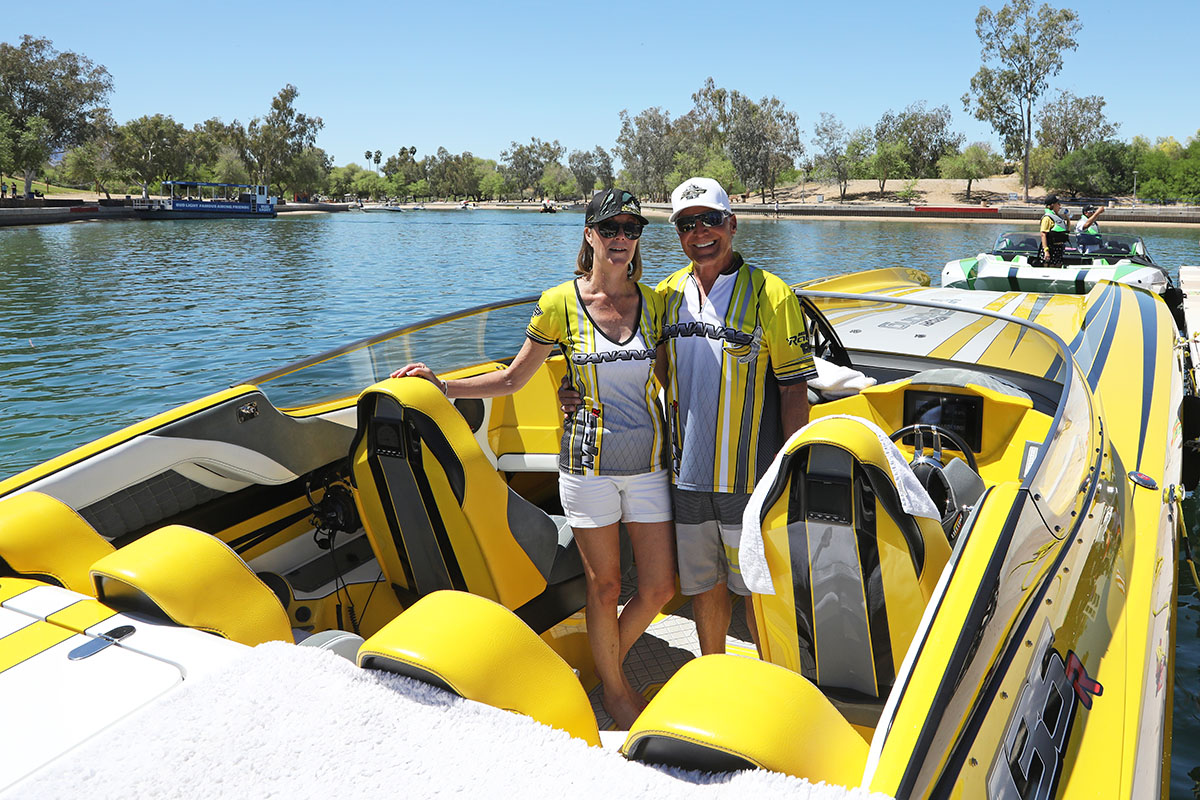 Starting with the debut of Bananas XL—a new DCB Performance Boats M44 Widebody powered by twin Mercury Racing 1550/1350 dual-calibration engines—at the 21st annual event, the spotlight was focused on the couple’s new 44-foot catamaran that was even more extraordinary than Bananas, the Megugoracs’ M35 Widebody with twin Mercury Racing 1350 engines that commands attention wherever it goes.

It was, however, the M35 that Dave Megugorac, aka Magoo, put to use extensively on Lake Havasu with three impressive passes in Saturday’s top-speed shootout of 162, 161 and 162 mph just a few days after giving rides to less fortunate individuals as part of the event’s Krusin’ for a Kause charity rides on Wednesday based at the host venue for the Desert Storm Poker Run, the London Bridge Resort. 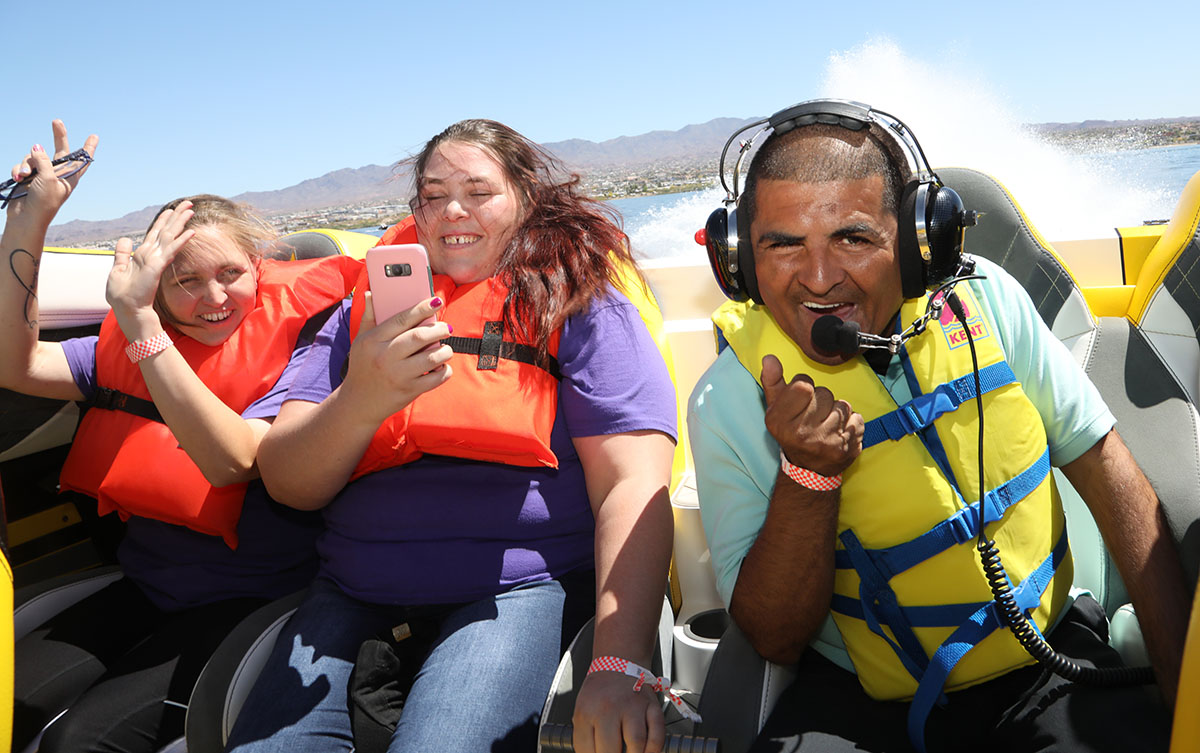 Some of the Krusin for a Kause participants were thrilled to get a ride in the Megugoracs’ 35-foot DCB catamaran.

“Fortunately we had pretty good weather for Desert Storm this year,” said Megugorac, who couldn’t give the team at DCB enough praise for its work on his new 44-foot cat. “Most important, the weather was perfect for Krusin’ for a Kause. In the past we haven’t been so lucky and we’ve had to stick to the bay and find some calm water to take the people out safely.”

Megugorac, who called the Kruisin’ for a Kause event his favorite part of the poker run, said he took several boatloads of guests for rides in the 35-footer—and he’ll be back in 2020 to do it all over again.

“I think this was our seventh year giving rides—and it never gets old,” Megugorac said. “The event really grounds me. It blows me away that someone can take a ride on my boat for five minutes and have his or her life turned upside down. We get to be around these types of boats all the time so they become ‘normal,’ when in fact, for most people, performance boats are far from the norm.

“I’m a little selfish about the whole thing,” he added. “I believe I get more out of giving the rides than the people getting them. Some of the participants we’ve met at different times over the years and they’ve become part of the family. I know people like to give all of us—the boaters who volunteer their time and equipment—a lot of the credit, but we get a lot out of the encounter, too. You can’t beat the feeling you get when you’re heading back in and the kids are screaming in the headsets because they’re so excited about what they just went experienced.” 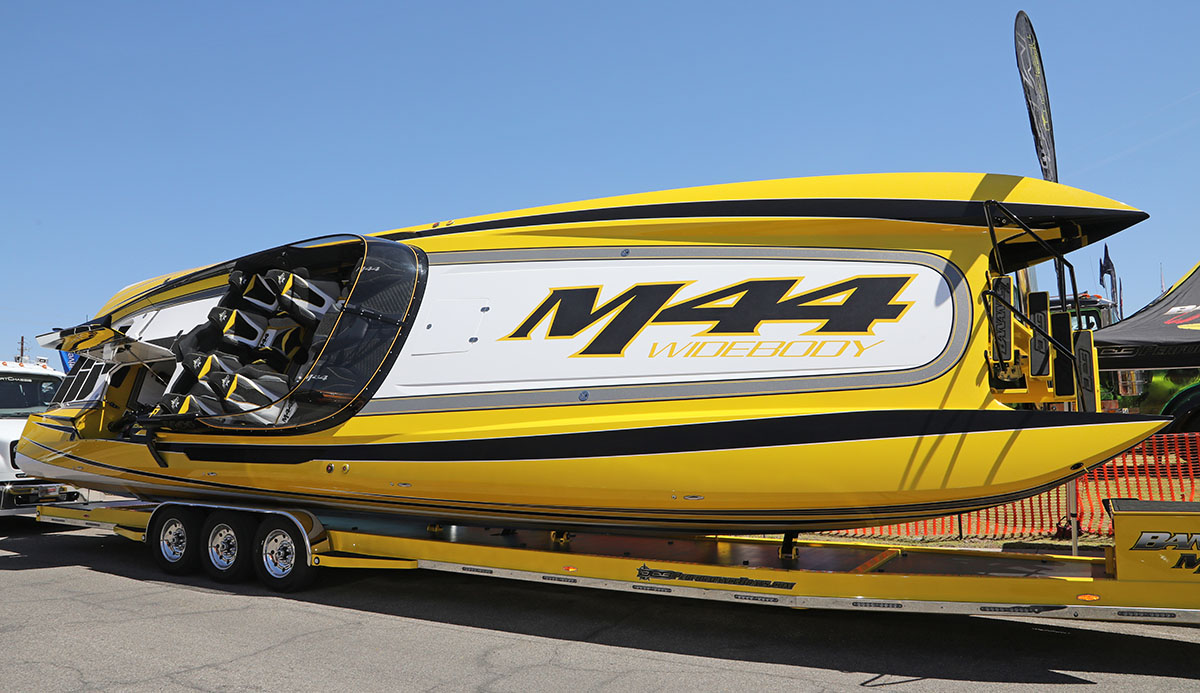 “It’s a real wake-up call for us, especially when you see people whose health is declining each year,” he said. “We are proud to be part of such an incredible and impactful event, and will continue to do so at Krusin’ for a Kause and other events like it around the country.”

Speaking of events around the country, look for the Megugoracs’ M44 Widebody at the Lake of the Ozarks Shootout in Missouri, the 1,000 Islands Charity Poker Run in New York, the Key West Poker Run in South Florida, and the Lake Powell Spring Fun Run and Lake Powell Challenge in Northern Arizona—their home away from home—and more.