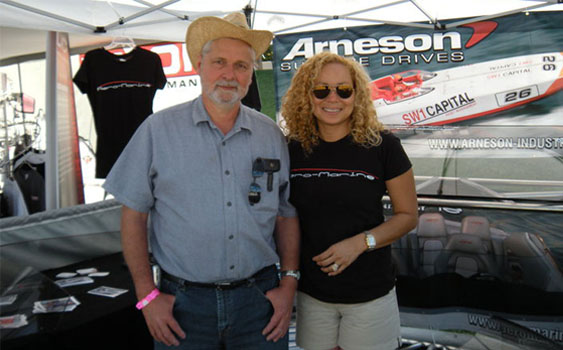 Catching up with Carmen Bélanger-Martin is not an easy task. The president of Aero-Marine is always on the go, on the phone or on the production floor—or maybe out shopping for a new purse. Seriously though, Bélanger-Martin has never been busier, and that’s considering the original marine windshield and canopy business is less than half of what it was several years ago because of the economic downturn and decline in new boat sales.

So why is Aero-Marine—now in its ninth year—staying so busy? Along with supplying high-quality acrylic and polycarbonate windscreens and canopies for builders such as Douglas Marine/Skater Powerboats, Nordic Boats and Outerlimits Powerboats, the company has put a concerted effort into the aftermarket business, providing retrofit windshield and windscreen kits for a variety of makes and models from the likes of Baja Marine, Eliminator Boats, Spectre Powerboats and many other companies. 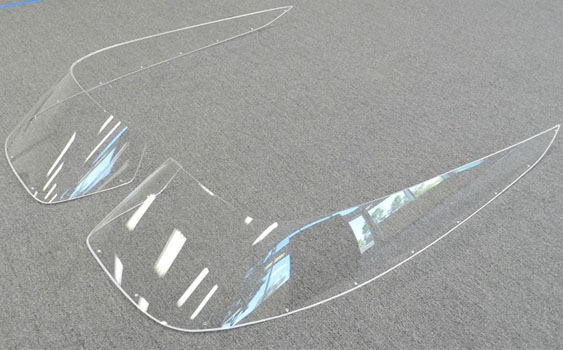 Aero-Marine offers many windshield and canopy kits for a variety of models, including Eliminator’s 28 Fun Deck. Photo courtesy Aero-Marine.

And chances are, if Aero-Marine doesn’t have the part you need—it can tool one up to suit your needs like it’s currently doing with a Baja 252 Boss. Rather than build parts to fit within the boat’s standard aluminum frame, Aero-Marine is creating a freestanding windscreen that bolts on without having to make any changes to the deck, in turn giving the boat an entirely new look.

The Fontana, Calif., company also has diversified itself beyond the windshield kits, creating a couple of other brands under the Aero-Marine banner—AM Crystal Clear windshield cleaner, which the company introduced in 2011, and AM Hot Rod Glass, which was started in 2012 and offers customizable, affordable and accessible options for a variety of applications from duplicating classic car windshields to full roof panels, razored roadster glass and chopped windows. 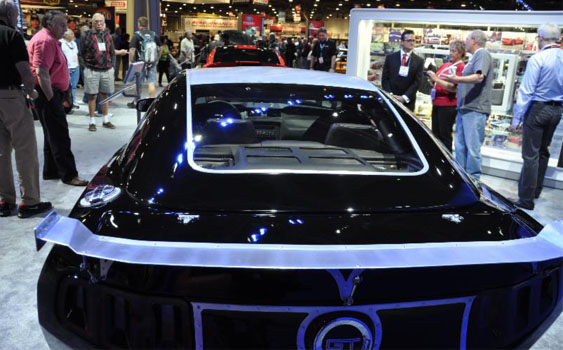 AM Hot Rod Glass produced the acrylic rear window that was part of a handmade lift-off roof on this 2014 Mustang GT Convertible by Hollywood Hot Rods, which took home the Ford Motor Company’s “Product Excellence Award” at the 2013 SEMA Show. Photos courtesy Aero-Marine.

In fact, AM Hot Rod Glass has blossomed into such a solid business model—in part thanks to partnerships with Rad Rides by Troy, Hollywood Hot Rods, Galpin Auto Sports and more—that Bélanger-Martin spends quite a bit of time traveling to hot rod events and trade shows such as the Specialty Equipment Manufacturers Association (SEMA) Show in Las Vegas.

One of the jobs she is most excited about is an upcoming project designed by Rad Rides, in which Bélanger-Martin is utilizing her marine quarter canopy technology on a secret car for the Bonneville Speed Week in August.

Obviously the marine side of the business still garners much of her attention—hence the recent emphasis on aftermarket kits—but Bélanger-Martin also is proud of her work within the movie industry, which includes the recently released “Captain America 2: The Winter Soldier.”

Pushing the limits beyond anything Aero-Marine has fabricated for the industry, Belanger-Martin said the company’s first film for Marvel/Disney pushed its fabrication abilities while working closely with directors, special effects crew, set designers and more.

“Watching Captain America 2 was awesome—I finally got to see everything we worked on come to life,” Bélanger-Martin said. “The best part was watching the World Security Counsel’s video call/meeting. We built 8-foot and 10-foot half cylinders, and while the scene showed the projected images on them, you were able to look through them and see the chairs behind the acrylic walls. That was amazing. The movie solidifies who Aero-Marine and AM Hot Rod Glass are and clearly explains why we are the best in the U.S. I am very proud of my crew.”

While she and the Aero-Marine crew are quite busy, Bélanger-Martin encourages anyone with a windscreen or canopy question to call the shop—909-350-3543—as she has dozens of retrofit and replacement kits available in a variety of thicknesses and tints.

“What I’ve learned over the years is that many windshields are from the same windshield tooling,” Bélanger-Martin explained. “We’ve got a full catalog of windscreens we’ve tooled up and we can custom form distortion-free and optically clear acrylic windows and prototyping for any project.”