You are at:Home»Industry»Nor-Tech’s Exotic Escapades 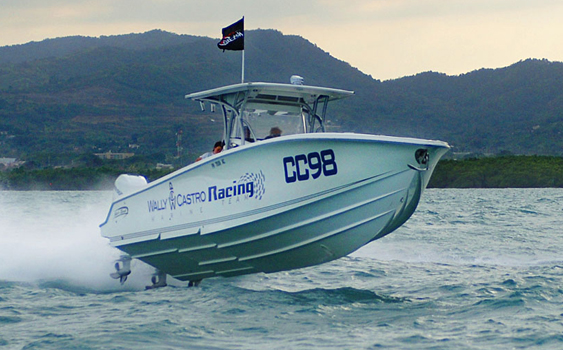 Powered by three Mercury 300 Verado engines, the 390 Sport from Nor-Tech easily tackled the rough water off the coast of Puerto Rico.

Now tell me this doesn’t sound like an incredible month’s worth of boating: Scot Conrad, a company representative for Nor-Tech Hi-Performance Boats, recently increased his long list of performance-boating experiences with an eventful few weeks that started with the Miami International Boat Show in mid-February.

After handling walkthroughs and demos for the company’s diverse lineup of powerboats, including center consoles, catamarans and offshore V-bottoms in Miami, Conrad drove a new 390 Sport center console in the Florida Powerboat Club’s Miami Boat Show Poker Run. Two weeks later, he headed southeast to Puerto Rico for another boat show and an offshore race. The seasoned racer hadn’t raced in more than five years, but Nor-Tech’s Puerto Rican dealership, Wally Castro Marine, wanted to showcase how well that same 390 Sport that did the poker run could perform in a challenging race environment. 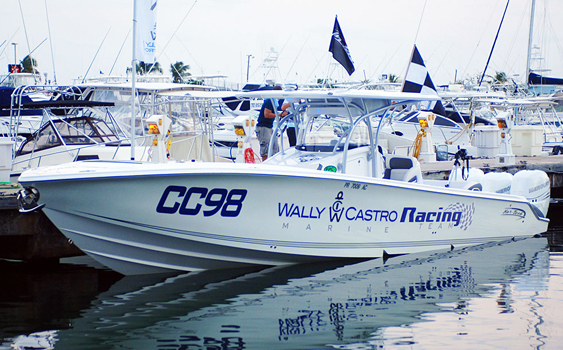 Powered by triple 300-hp Mercury Verado engines, the stepped 39-footer was the reason Conrad made the trip to Puerto Rico in the first place. The all-white 390 Sport with blue and silver accents was on display in the water at the Caribbean International Boat Show from March 8-10. Located at the Puerto del Rey Marina in Fajardo, the show is the largest one in the Caribbean.

At the same location that weekend was the Puerto del Rey Offshore Grand Prix—a Puerto Rico Offshore Series event. Wally Castro, owner of the dealership that also displayed several Boston Whalers, a 63-foot open flybridge from Riviera and more, signed up to race the 39-footer with Conrad and Garbiel Coll, Wally Castro Marine’s sales and marketing partner. (Check out the cool video from the race that was put together by the talented Mario Vazquez—he also took the photos.)

“We finished second overall in a field of 15 boats, and we won the center console class,” said Conrad, who squeezed in a trip to California to celebrate his son’s 16th birthday between Miami and Puerto Rico. “I kind of thought Wally was nuts when he said we were going to take the 390 and race it. But he knew if we went out there and did well that the boat’s exceptional performance would be obvious. It was unbelievable, the boat showed really well.

“During the boat show, we did a bunch of sea trials with potential customers,” he continued. “Wally Castro Marine made one of hell of an effort at the show. The guys were first rate. We were working hard all weekend.” 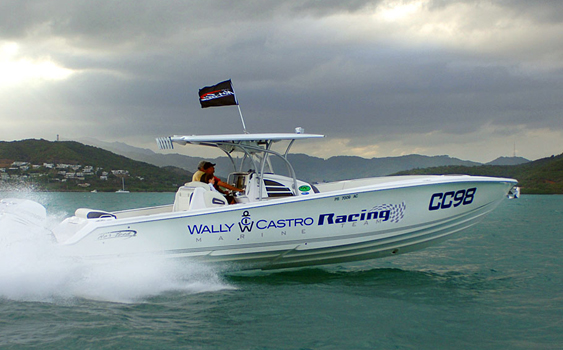 Yes, all that is technically work, but to most of us that sounds like dream “work.”

Jealous yet? Get this: In a little over a month, Conrad, Castro and Vazquez will venture to the British Virgin Islands for the legendary Levrick Bay Poker Run on Sunday, May 26.

“We should have several Nor-Techs at the BVI run this year—I can’t wait,” Conrad said. “Another big event we’re doing is Thunder Over Louisville (April 18-20). We’ve got a lot of stuff going on right now, including a sizable military workboat order. The performance boat sales are strong and, of course, the center console orders are driving the business.”

And it’s still spring. I can only imagine what Conrad’s summer is going to be like.

All photos by Mario Vazquez.