You are at:Home»Industry»The Editor Factory

“You know you started all this, right?” I said to Spencer.

He just chuckled and grinned.

Before it became a victim of the general decline in print magazines and closed in 2013, Powerboat was a top-notch publication loaded with editorial talent.

But I was right. Spencer, you see, worked over Eric Colby—the guy who ended up hiring me as his managing editor at Powerboat in late 1993. Driven by Bob Nordksog, the magazine’s wealthy industrialist publisher, Spencer was pivotal in developing the monthly publication’s annual Performance Trials and awards program. He worked closely with Nordskog, as well as Bob and Norm Teague, to make it the finest—and most marketable—program of its kind.

I worked at Powerboat, a Ventura, Calif.-based outfit that had all the wonderful intimacy and massive dysfunction of any family-owned business, for the next seven years before leaving to help start boats.com in San Francisco. By the time I departed, Doug Thompson had taken over for Colby, Jo Stich had taken over for Thompson and Brett Becker had taken over for Stich.

By the time I returned as a freelance writer with the lofty title of editor-at-large, Gregg Mansfield was running the show. (Sadly, boats.com did not turn out to be the last job I would ever have as I had hoped it would—most of us in the dotcom world learned the hard way when the bubble burst.) A few years later, Jason Johnson—my speedonthewater.com co-publisher and fellow offshoreonly.com columnist—took over for Mansfield. And that was the way it was until 2011 when Powerboat went dark.

Here’s what they all had in common: They were really good editors. They all had strengths and weaknesses, as all of us do as professionals (and as human beings). But they generally made sound editorial decisions based on their visions and goals for the magazine and were delightful to work with.

As a feature writer, you look for an editor who does no harm, one who makes your work better. For different reasons, all of them helped me improve.

So where are they now?

Spencer, as noted previously, is working with Donzi, Baja and Fountain, the latter with which he’s been inextricably linked for the better part of three decades. Colby, who left Powerboat to work for Boating magazine, is now a senior editor at Soundings/Trade Only. Thompson went to iboats.com, which got crushed before launching when the Internet boom went bust. He later founded video-based VehicleTEST.com—where he still works to this day—with the late Captain Chris Kelly, another former marine writer.

Stich eventually moved from Southern California to North Carolina with her husband, Brad, to raise their three beautiful children. A talented graphic designer as well as editor, Stich produces digital media displays and print materials for businesses in need.

Becker, who always wanted to write about cars and trucks, freelanced for boats.com after leaving Powerboat and eventually found his dream gig as the communications director for National Auto Sport Association. His current duties include wearing the editor hat for Speed News magazine. Mansfield went into public/media relations for the Unlimited hydroplane circuit (and he raised its press-release game significantly) and now works as the editor for Poker Runs America magazine.(Colby did a stint or two there as well during the years.)

Johnson, as noted above, is my partner in speedothewater.com, which celebrated its 10th anniversary in October 2019. He joined me more than eight years ago and has been working silly hours ever since. 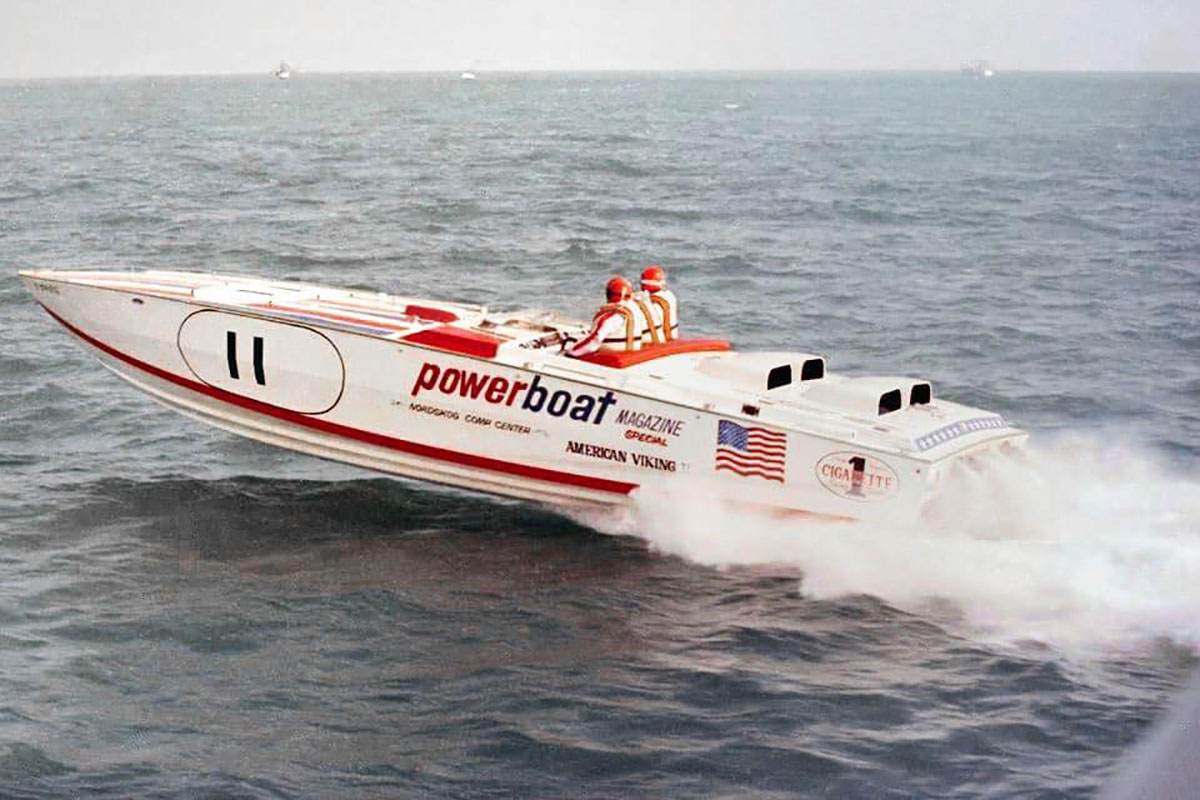 During the 30-plus years Powerboats was published by offshore racer and entrepreneur Bob Nordskog (above) and—after his death—his son, Jerry, Powerboat had a wealth of talented editors.

Interesting side note: Thompson, Mansfield and Johnson were products of the Ventura County Star, a daily newspaper, before coming to Powerboat. (And Mansfield and Johnson both earned their journalism degrees from Pepperdine University, just a few clicks down the road in Malibu.) Once you’ve worked at a daily paper, a monthly magazine with a massive budget seems like a pretty cushy gig, which in fact it was. So the Ventura County Star alums loved it.

Thompson used to joke that working at Powerboat was like riding an elephant, a rare treat of gigantic proportions, but one that was often slow to change course. He was right, of course. But Powerboat was more than that. It was an editor factory. No high-performance marine publication everproduced more high-quality editors.

And no magazine’s editorial crew ever had more fun along the way.