You are at:Home»Industry»Will Custom Center Consoles Rule the High-Performance World? 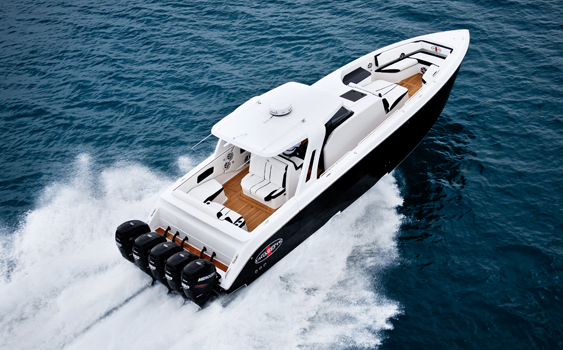 On numbers alone, the custom center console movement in the go-fast powerboat world is impressive. Consider this: in 2012, Cigarette Racing Team introduced two new center console offerings—the 39’ Top Gun Open and the 42’ Huntress—in addition to another iteration of its 39’ Top Fish. In the past three years, Nor-Tech Hi-Performance boats has introduced 39-, 34-, and 29-foot center consoles, and a 42-footer is in development. Statement Marine also came to the center-console party in 2012 with a plush 36-footer to go with its 37- and 34-foot siblings

You get the picture.

The custom center console trend is undeniable, the movement unstoppable. It doesn’t mean “death” to high-performance V-bottoms and catamarans, but it’s definitely having a big impact on the market. Or, if you prefer, the center console movement is giving new-boat buyers more choices and custom go-fast boat builders an opportunity to expand their product lines and survive in what remains a tough economy.

“Center consoles are 80 percent of what we’re building now,” says Terry Sobo, the director of sales and marketing for Nor-Tech. “The buyers are typically people who’ve owned numerous performance boats over their lifetime. They’ve had fun, gone fast and are now looking for something simplified—a simplified version of high-performance boating. Performance center consoles lend themselves to that kind of experience. Their spaciousness and performance are what keep those buyers from going to a bow rider or a cruiser. They still get to go reasonably fast and be comfortable.”

Sobo added, “Suddenly, we’re also getting ‘traditional buyers’ from the center console market. To them, we’re a ‘new’ company, even though we’ve been around for 23 years.” 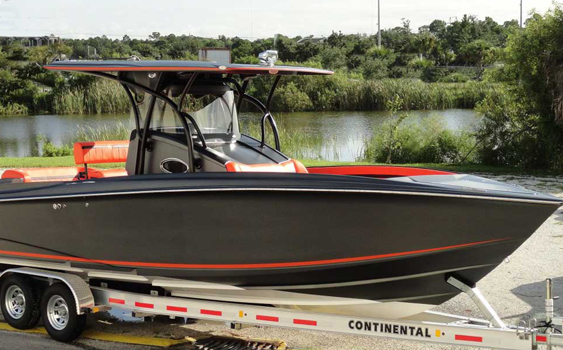 The 298 is the latest—and smallest—model in Nor-Tech’s center console series.

To be fair, production builders Fountain and Donzi jumped into the center console market 20-plus years ago. But unlike those now-deeply dormant builders, custom builders aren’t targeting hardcore fishermen. (Nor-Tech presents a notable exception, as the company offers angling-specific versions of its center consoles.) Custom go-fast boat builders are going after existing customers as well as new buyers who want something versatile and sporty—though not something on the order of a 150-mph aquatic rocket

“It’s all about utility,” says Fred Kiekhaefer, the president of Mercury Racing. “You can put a big party on one. A center console is just more of a social boat. Obviously, you can’t go as fast but it has enough hull to handle the kind of rough water that a pontoon boat couldn’t.

Kiekhaefer added, “You can get more people on a center console and have more social fun. It comes right down to that.”

Dave Patnaude, the president of the New Jersey Performance Powerboat Club, couldn’t agree more. In 2004, he gave up his 37-foot Outerlimits V-bottom with twin custom-built 600-hp engines for a 36’ Concept with twin Mercury OptiMax 250 XS outboard engines. And he never looked back.

“My daughter came along, and center consoles are very kid friendly,” says Patnaude. “You know, the Outerlimits was an awesome boat, but the maintenance and repair bills were pretty onerous. Between the versatility of the center console and the lower cost of ownership, it made a lot of sense. I can get a lot of people in it. I can do poker runs in it. I can fish from it if I want. It has a 24-degree hull so it can run in rough water. And it still looks cool.

Added Patnaude, “I do miss the Outerlimits every now and then, but I am fortunate enough to have friends who still have those kinds of boats. I can usually hop on one for a lunch run and ‘feed the need,’ but the need isn’t nearly as strong as the enjoyment I get out of my current boat.” 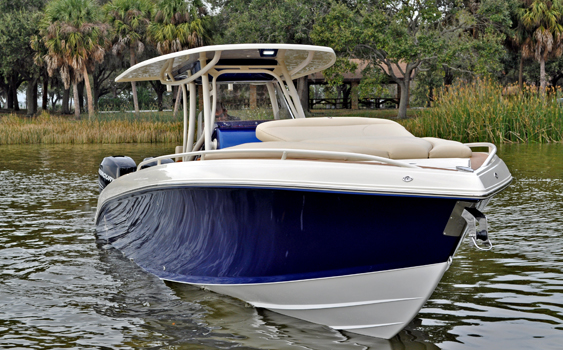 Though a few custom center consoles have been built with diesel power in the past few years, most have been set up with outboards. That won’t change for a number of reasons—center console tradition and perceptions of outboard-over-stern-drive efficiency chief among them—but both Kiekhaefer and Sobo say there could be “an opportunity” for stern-drive applications/installations down the road.

The majority of custom center console buyers, according to Sobo and most everyone else in the custom go-fast boat world, are existing, brand-loyal buyers. That’s good news, in that it translates to opportunity for new-boat sales, but bad news in that it indicates the market is “aging” faster than it’s growing via first-time buyers.

“The market is definitely aging,” says Sobo. “That’s why we’ve reacted to it. If you haven’t changed, you probably aren’t doing much of anything these days.”