You are at:Home»Legends»Keeping Up With Cosker

There’s no doubt he’s one of the busiest people I know in the industry—he’s also one of the most accomplished individuals I’ve come across in my 15 years in the business. Better still, John Cosker, the designer and builder behind the fastest catamarans in the world, is easily one of the coolest and calmest guys I’ve met—ever, not just in the performance boat world. 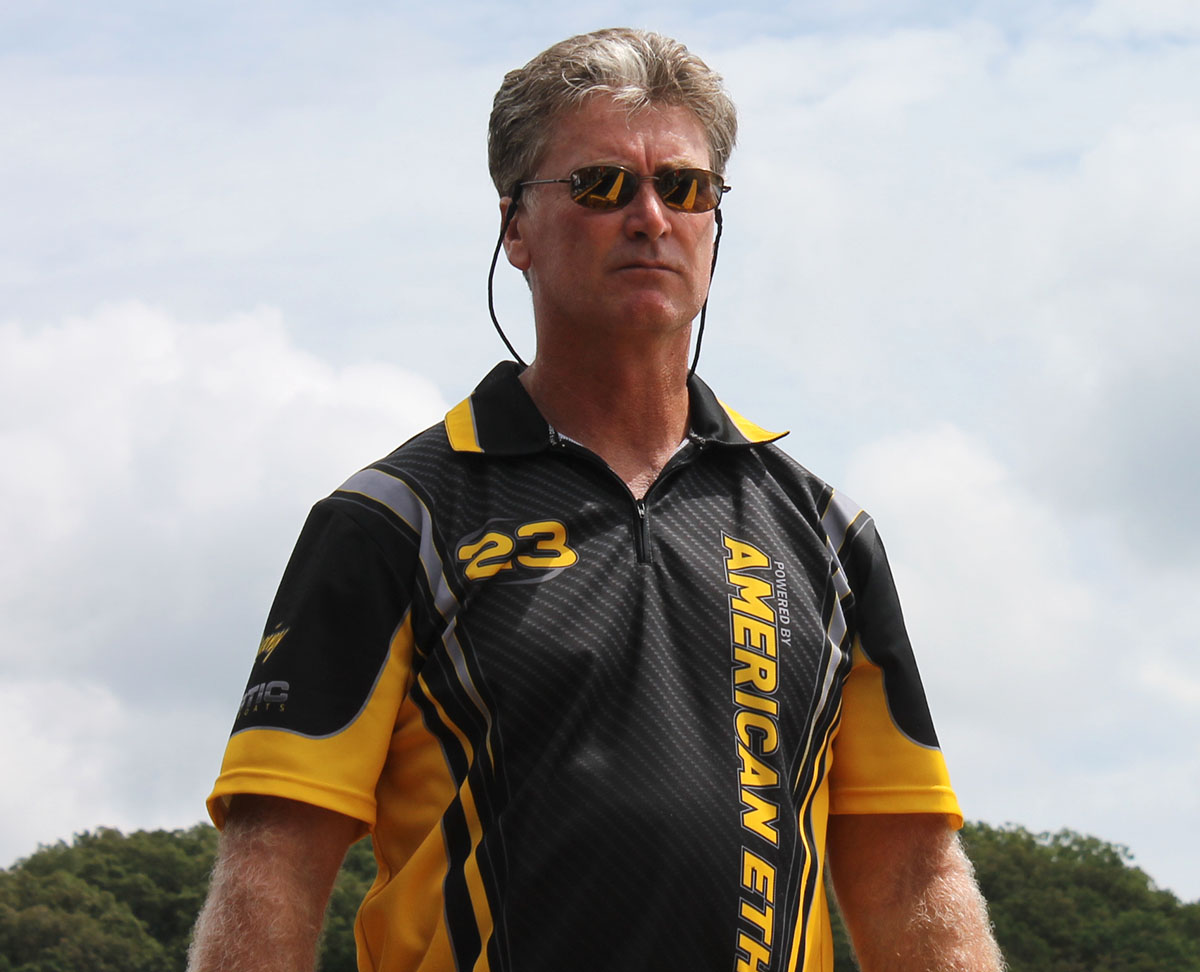 John Cosker of Mystic Powerboats is looking forward to an eventful week at Lake of the Ozarks in Missouri. Photo by Jason Johnson

That’s exactly why I’m looking forward to spending some time with the founder of Mystic Powerboats—the man who has logged more 200-plus-mph seat time than anyone I know of—during next week’s Lake of the Ozarks Shootout and Super Cat Fest gatherings on the popular Central Missouri waterway.

Between new go-fast catamarans and luxury performance center console builds, Cosker and crew have been extremely busy at the company’s DeLand, Fla., headquarters as of late. Next week is likely to be just as hectic as the member of the Lake of the Ozarks Shootout Bob Morgan Memorial Hall of Fame has deliveries, demo rides and plenty of Shootout obligations ahead of him. I’m hopeful he finds a little time to relax while he’s in Missouri, as the agenda he shared with me last week is pretty demanding—but then again, Cosker’s schedule usually is.

Between my fellow OffshoreOnly columnist Matt Trulio, who also happens to be my speedonthewater.com business partner and former Powerboat magazine colleague, and me, there is no shortage of stories following the tremendous career of Cosker. But that won’t stop me from writing about the legend who participated in his first Lake of the Ozarks Shootout in 2003.

The American Ethanol Mystic owned by Don Onken could be the first boat to win five consecutive overall Top Gun trophies at next week’s Lake of the Ozarks Shootout. Photo by Pete Boden/Shoot 2 Thrill Pix

Cosker said he plans to run American Ethanol again and is hoping he and driver Tony Battiato of Big Thunder Marine can earn the overall Top Gun award for the fifth year in a row in Don Onken’s 51-foot Mystic catamaran. If they can pull it off, the accomplishment would be the most consecutive wins for any boat ever at the high-profile event.

“We’re hoping to go a little faster in American Ethanol this time around,” Cosker said, referring to last year’s 204-mph top speed, which was the same speed he throttled Onken’s boat to in 2017, the first year of the event’s new three-quarter-mile course. “We are going to have ‘Slug Fest’ this year. We just delivered his new M4200 with triple Mercury Racing 450R engines a few weeks ago and we are working to finish his new C3800 cat with twin 450Rs to have it at LOTO.”

Cosker said all three of Slug Hefner’s Mystic models—the new center console and sport cat along with his 50-foot cat—are going to be on display at the Shootout On The Strip gathering on Wednesday and on hand in the water at Camden on the Lake Resort during Super Cat Fest. 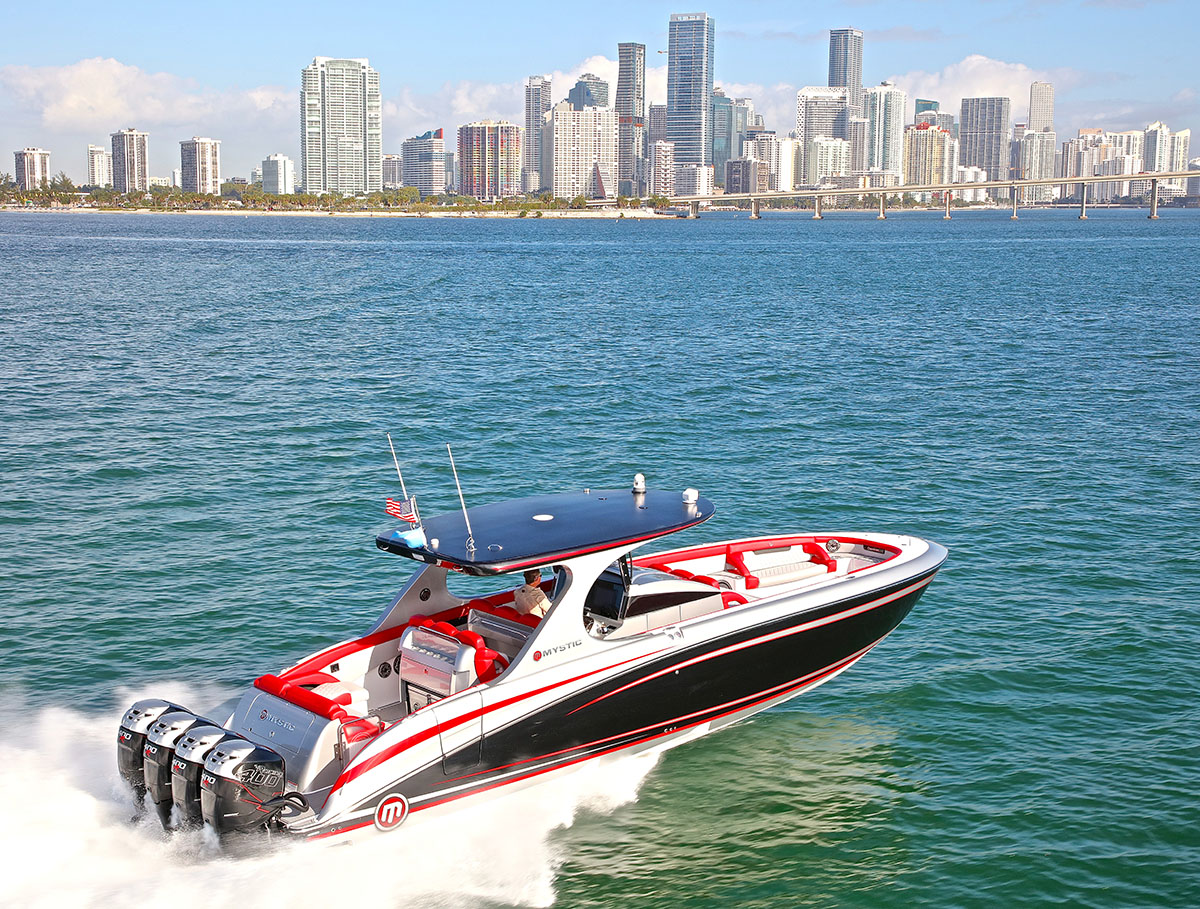 Mystic can barely keep up with the demand for its M4200 (pictured) and M3800 luxury performance center consoles since introducing them a few years ago. Photo by Pete Boden

“We plan to have a good show at Super Cat Fest with Slug’s boats as well as another six boats for a total of nine on display throughout the weekend between factory, dealer and private owner boats,” Cosker added. “Demo rides will be available throughout the weekend on the various boats to qualified buyers. All of our current model line will be represented.”

Cosker also said that several Mystic owners who are not participating in Friday’s poker run are going to get together for a casual lunch run to the new Mystic Marina and Resort in Gravois Mills. And no, the former Big Thunder Marine facility that was sold earlier this year has no affiliation with Mystic Powerboats; although the name is the reason the owners are going there.

Obviously Cosker is going to be a busy man next week. While he’s the first to tell you he couldn’t do it without the support of his wife, Robin, his national sales manager, Greg Weber, his production manager, Ryan Zivitski, and the rest of the team at Mystic, you can be sure Cosker will be leading the way at Lake of the Ozarks next week. The rest of us will do what we can to keep up.