You are at:Home»LOTO»The Show-Stopping Shootout on the Strip 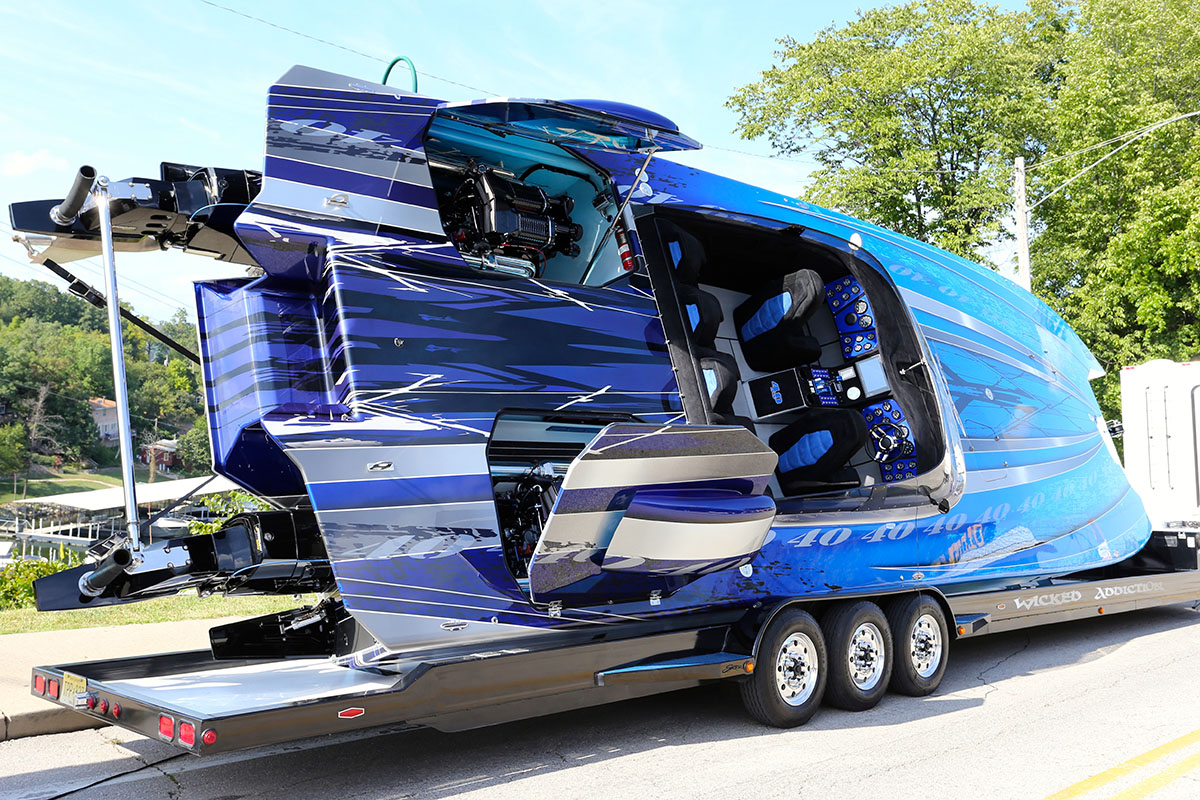 New Jersey’s Elmer Morgan brought his Wicked Addiction Skater—one of several boats tied in to the Waves and Wheels display—to the Shootout on the Strip.

Whether it’s the Boyne Thunder Poker Run in Michigan, the Texas Outlaw Challenge, the Desert Storm Poker Run in Arizona or the Lake of the Ozarks Shootout in Missouri, the one thing that never ceases to amaze me when it comes to the various open-to-the-community performance boat displays at all of those events and more is the effort put forth by the boat owners, dealers, manufacturers, engine builders and beyond to showcase their products.

This year’s Shootout on the Strip, which stretched more than a mile along Bagnell Dam Boulevard in Lake Ozark, Mo., was no different. In fact, the Waves and Wheels-sponsored event might have been the most impressive one I’ve attended in terms of support from all across the country. Boat owners from New Jersey to California brought their toys to display, and builders from the likes of Cigarette Racing Team, DCB Performance Boats, MTI, Mystic Powerboats, Outerlimits Offshore Powerboats, Sunsation Boats and more poured their resources into showcasing their latest and greatest boats.

Slug Hefner’s brand new 50-foot Mystic got tons of attention alongside a trio of Mystic M4200 luxury performance center consoles and one of the company’s C4400 catamarans.

“I think the turnout for this year’s Shootout on the Strip was amazing,” said Justin Wagner, owner of Waves and Wheels in Osage Beach. “There was a huge crowd of spectators on hand, and for good reason. The lineup of boats of all shapes and sizes—there were 52-foot catamarans from MTI all the way down to drag boats and personal watercraft—was incredible. Not only did we have an amazing DJ, Justin Farrell, playing music through a sound system connected to several boats, we organized a charity raffle that raised more than $1,200.

“I’d definitely like to thank all of our friends and clients who helped us set up our section of the street,” he continued. “We have so many cool customers who go out of their way to help us entertain the crowd. Elmer Morgan brought his Wicked Addiction 40-foot Skater from New Jersey, Derek Wachob and the entire team behind the Black Diamond MTI are always so supportive and Ernie Dampier and Michael ‘Doc’ Janssen are especially accommodating. And of course I have to thank Rusty Rahm of Wake Effects, who put his 52 MTI in the Waves and Wheels section even though he could have set it up with his toterhome and the remarkable Wake Effects MTI raceboat down the street.” 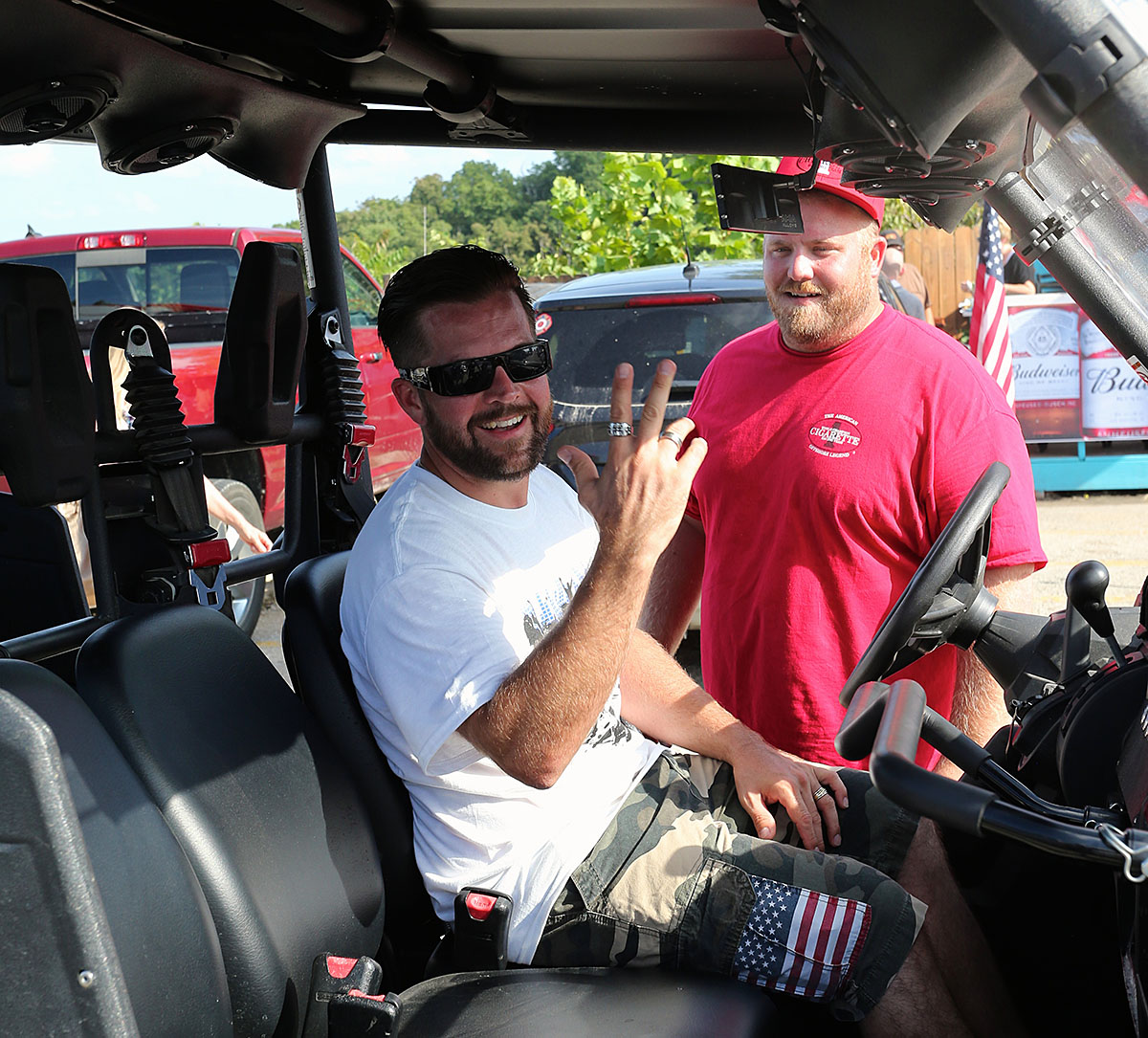 Justin Wagner of Waves and Wheels, the presenting sponsor of the Shootout on the Strip, didn’t hesitate to thank everyone who had a hand in putting the event together.

Wagner, who doesn’t envy the job of the Shootout committee who organizes the massive undertaking, added that he and his team are glad to have the event behind them as it’s quite an undertaking just to put together their “small” section of the Shootout on the Strip.

From my observations, there were several things that impressed me, including the special section carved out to recognize the defending overall Top Gun champion, the American Ethanol Mystic catamaran owned by Don Onken, the amount of local support from dealerships such as the up-and-coming Big Thunder Marine and the turnout of like-minded folks throughout the evening. It really is a reunion of sorts when you have people from Florida, Texas, Kentucky, Illinois, Georgia, Maryland, Oklahoma and everywhere in between all gathering to share in their passion for powerboats. Of course there were stereos cranking and a rainbow of LEDs shining as I walked up and down the strip, but what really amazed me was the size of the crowd and the local establishments that were jam-packed with customers.

There also were a couple of unimpressive things, such as the time it to took to get the boats situated and the way many of the boats were double-stacked on one side of the street. That scenario, which could easily be avoided by lining boats up and down each side of the boulevard, created some tension amongst the group and also made it tough for the spectators to get a clear glimpse of each boat without having to walk in a tight row between the boats.

And after the effort put forth by everyone who displayed their boats, that was definitely disappointing.