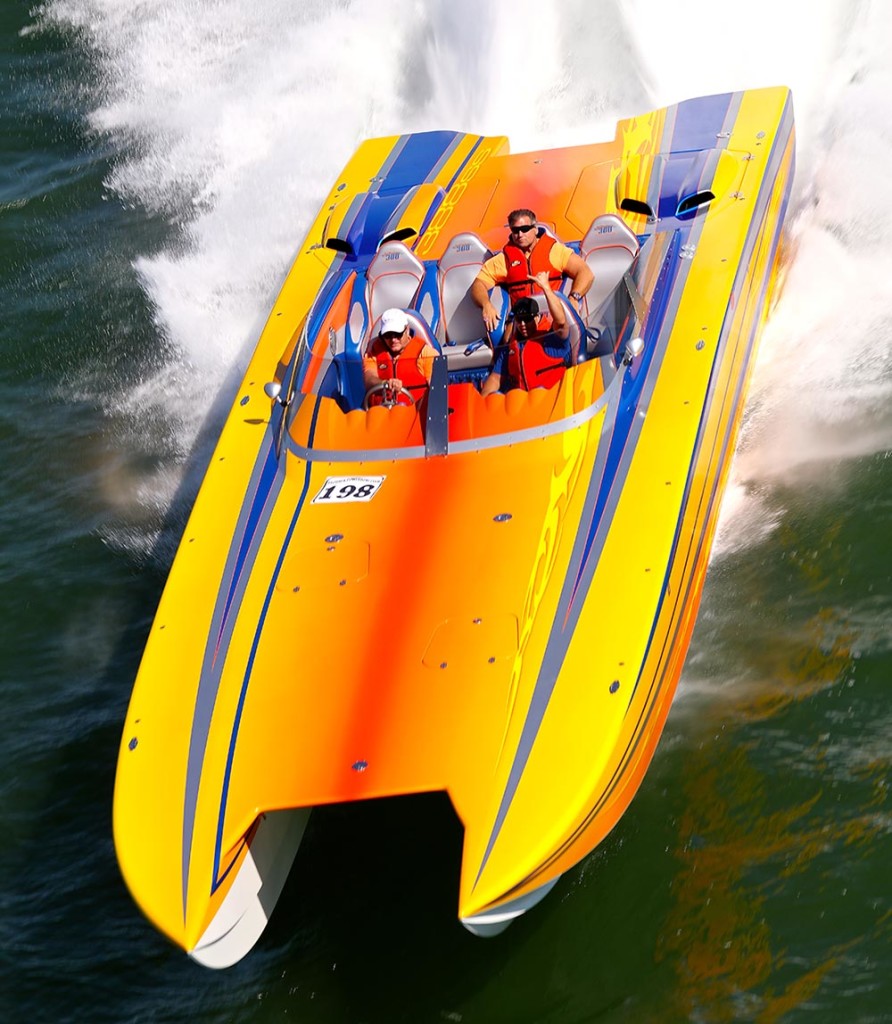 Dr. Sam Singer (at the wheel) invited his friends, Vinnie Rifice and Ron Szolack (back seat), to join him in his 388 Skater for the first day of the Miami Boat Show Poker Run.

I don’t know about everyone reading this, but I’ve never seen a picture of Ron Szolack sitting in the back of a Skater Powerboats catamaran in a Florida Powerboat Club poker run. Yet on both days in which participants ran from Miami to Islamorada in this year’s FPC Miami Boat Show Poker Run, whom do I see in the back of two different 388 Skaters? Szolack.

I’ve known Szolack, who owns homes in Michigan and South Florida, for almost 10 years and while he’s bought and sold more boats than any one individual I’ve ever met, all I’ve ever seen is him holding onto the wheel or the throttles of a high-performance boat. Can the same be said for any of the cruisers or center consoles he’s owned? I don’t know, but those are different boats.

“I’ve never sat in the back of a boat like that ever, and I don’t really want to do it again,” said Szolack, who opted to still make the run to Islamorada’s Postcard Inn and Resort at Holiday Isle since he’d already registered his new Mystic Powerboats M4200 center console that he sold after taking it on the FPC’s Winter Poker Run to Marathon at the end of January. “It’s not like either ride was a bad ride—Thursday was much calmer so we were able to run faster than Friday—it’s just that I like to be in control. It is kind of boring sitting in the back.”

Boring? Maybe for Szolack, but not for most people who are lucky enough to catch a ride in Dr. Sam Singer’s 388 Skater with twin Mercury Racing 1350 engines or Michael Ciasulli’s 388 with the same power. Let alone on back-to-back days, which is what Szolack and his good friend, New York native Vinnie Rifice, got to do in Singer’s yellow, orange, blue and gray cat on Thursday and in Ciasulli’s red, orange, yellow and black cat on Friday.

The only difference was Rifice—who often throttles the boat with Singer, a world-renowned surgical oncologist from New York—got to ride up front and handle the throttling responsibilities. 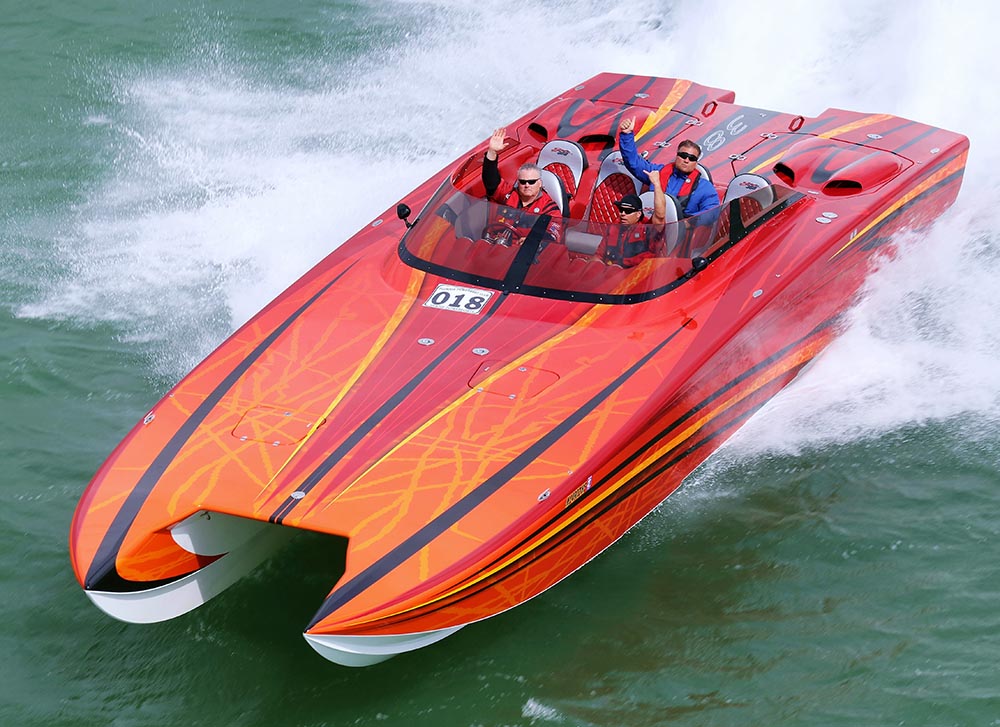 Rifice and Szolack caught a ride in another 388 Skater—Michael Ciasulli’s cat, which is powered by twin Mercury Racing 1350s just like Singer’s 38-footer.

“We had a great time running both boats to Postcard Inn, that place is great and Stu Jones and the FPC crew put on such a nice event there,” said Rifice, who has owned several Skater pleasure boats—his current being a 32-footer with twin 850-hp engines—and used to race the Talk ’N Trash Skater. “On Thursday we ran close to 170 mph most of the way to the first big bridge and the water was nice and calm. It was a different story on Friday as it was blowing and there were some four-footers out there. We still ran hard in Mike’s boat, but I don’t think we ever went faster than 120 mph.

“It was my first time running with Mike and we had a lot of fun,” he continued. “It was good that it was rough because it allowed me to give Mike a little throttling advice, which is one of the reasons I did the run again with him. Ronnie will say he didn’t have any fun, but I think he did. At least he saved some money by not bringing his own boat.”

Adding to the excitement of the two-day adventure was that Singer, Rifice and Szolack drove the Skater back to Miami on Thursday afternoon. That night Szolack, Rifice and Ciasulli stayed at Szolack’s house in Pompano Beach before turning around Friday morning to make the run down to Islamorada.

When asked if he wanted to be a passenger again in any upcoming poker runs, Szolack said, “Not if I can help it.” And that’s exactly why this story needed to be told; so there is proof that Szolack did ride in the back of a Skater once—make that twice.