You are at:Home»Miami Boat Show»Walking With Greatness: Following John Cosker in Miami 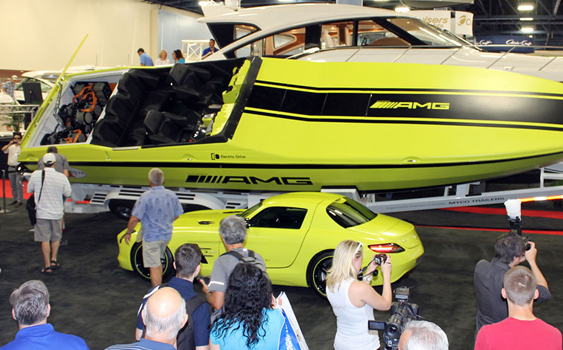 MIAMI — You’re probably familiar with the concept of “Six Degrees of Separation,” which basically holds that no one person on this planet is more than six acquaintances away from another. Well, for John Cosker, the owner and founder of Mystic Powerboats in DeLand, Fla., during the Miami International Boat Show, the number of degrees of separation falls to two.

How do I know this? Simple, I followed him around the show for a couple of hours today. I figured that trailing the guy who not only designed the Mystic line of custom high-performance powerboats but the entire Deep Impact center console line, several models in the Concept and Contender center console lines and a whole bunch of other stuff would produce some interesting moments and a good story line.

So what’s it like following Cosker through the Miami Show? It’s a story best told in the present tense. So here we go …

You walk into the Cigarette booth with Cosker to check out the new Cigarette-AMG electric drive 38’ Top Gun, far and away the most innovative product in the show. Cosker stands between the boat and the car that inspired it and peers into the engine compartment. He dubs the project “really neat and cool” and sighs.

“It’s the publicity side of the business I am bad at,” he says. “We are a much quieter company.” 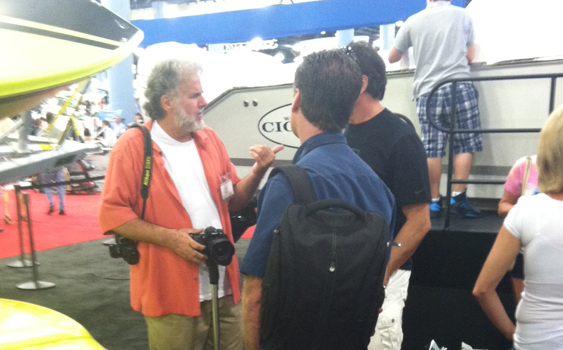 In the Cigarette booth, Cosker drew a crowd that included photographer Jay Nichols.

Seconds later he is surrounded by a small crowd including ace photographer Jay Nichols. He manages to extricate himself from that crowd only to be circled by another group that includes Tony Esposito of PR Power, Cigarette’s public relation agency.

“Pretty good—we’re staying busy,” says Cosker. “Better than it was.”

“I know what you mean,” Esposito says, then laughs. “Whoever thought ‘neutral’ would look so good?”

From there it’s a short stroll to the Marine Technology, Inc., display, the centerpiece of which is the company’s mind-blowing 52-foot catamaran. I ask Cosker if he’d like to build more pleasure boats like the stunner in front of us—of the 14 CS5000 Mystic catamarans he has created, ten have been raceboats. 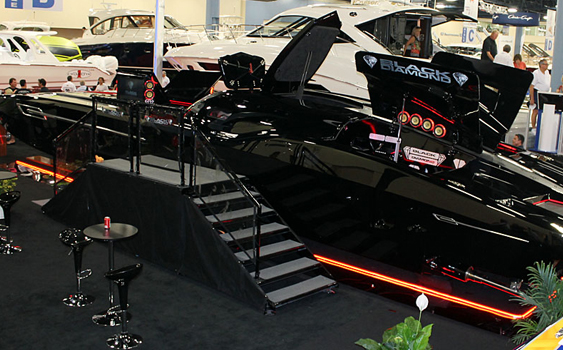 Cosker on MTI: “These boats take a lot of time to build. I have a lot of respect for Randy Scism for building them.”

“It’s a tough market to get into,” he says. “The customers are involved in everything, there’s a lot of fit and finish and detail you have to pay attention to. These boats take a lot of time to build. I have a lot of respect for Randy Scism for building them.”

“Raceboat are easier to sell because all you have to do is go fast and win,” he adds.

Moments later we are standing in the Deep Impact booth, where every hull in the line is a Cosker design. Cosker meets Kim Bradley, the company’s new director of sales and marketing, officially for the first time.

“Yeah, I stopped by the shop for a little while last week,” says Cosker.

The conversations turns to the growth and development of the Deep Impact line.

“Fifteen years ago they signed the first check on the hood of my truck for the design of the 33,” says Cosker. “There’s been a lot of evolution from the 33, to the 36 and then to the 39. The ride and performance of the 39 are much better. After 50 stepped hull designs over 15 years, everything gets better. It’s evolution.” 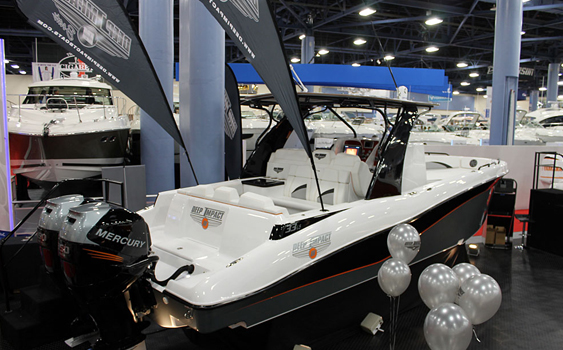 Cosker designed every Deep Impact in this image.

Walking down one of the aisles in the convention center we stop to say hello to John Tomlinson, the owner of TNT Custom Marine and famed offshore throttleman. Tomlinson is chatting with one of his customers, an 80-year-old named Jean Louis who used to own the 40-foot on display in the MTI booth. Louis and Cosker strike up a conversation, and Cosker ends up handing him a business card.

“That how it works for me, I meet someone through someone and I end up selling a boat,” says Cosker after we say our goodbyes and get moving. “And I didn’t spend $100,000 displaying at the boat show.”

We are headed to the Concept display outside the convention center to the Concept booth when we run into Bill Tomlinson, the owner of the 50-foot My Way Mystic catamaran that was damaged during a nasty accident last summer. Tomlinson says the boat has been repainted at The Art of Design shop in Elkhart, Ind. That prompts me to ask Cosker about the extent of the repairs.

“Whether it’s a small repair or a big repair, you’re replacing a section of the boat so you have to handle it in the same careful way to make sure everything done right and the repair is strong,” says Cosker. 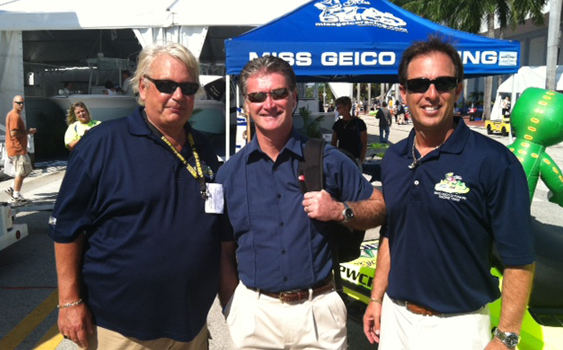 The warm, fresh air outside the convention center feels good. Across the way is the Miss GEICO display and, of course, with Marc Granet, Gary Goodell and Reese Lewis in the booth, we have to make a quick stop—Mystic’s hottest raceboat was a 50-foot Mystic cat, at least before it burned to the waterline last summer.

Granet is buzzing on the news of the day that his team will run the new Mercury Racing 1650 Race engines this season.

“Maybe we’ll buy a new Mystic,” he says to Cosker, who offers no response. But I can’t resist.

“Marc, John and I just met an 80-year-old who is more serious about buying a Mystic than you are,” I say. 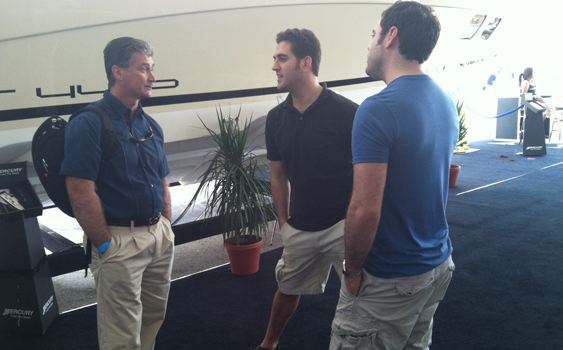 In the Concept booth, our last stop of the day, Cosker chats with the company’s Susan Patterson about the modifications he did for the company’s 39-footer last year. Cosker also designed the hull for Concept’s 44-foot center console, which has been painted, as have its Mercury Verado outboard engines, in easy-on-the-eyes cream and tan.

“I like the color a lot,” Cosker tells Patterson. She nods. She likes it a lot too.

Patterson tells me that she uses Cosker’s name proudly and frequently when she sells Concept models. She knows that his design credentials in the high-performance powerboat world are as good as they come.

I want to go elsewhere with Cosker—this is too much fun—but I have a deadline and I have to go. When I leave, he is talking to Dave Kopke and Mike Moreno, two of his bigger fans, and industry veteran Chip Fendt about running more than 200 mph.

“At 203 mph, the Tencara cat used to start to fly and get scary,” says Cosker. “The 50 stays connected at that speed.”

Kopke and Moreno pay rapt attention. Their eyes light up. They know ther are in the presence of greatness.