Let’s be realistic, for entertainment options, style and dependable performance, you can’t go wrong with any model in the Formula Boats lineup. And in terms of pure luxury and spaciousness, it’s really hard to beat the 40-plus-foot models from the Decatur, Ind., company. 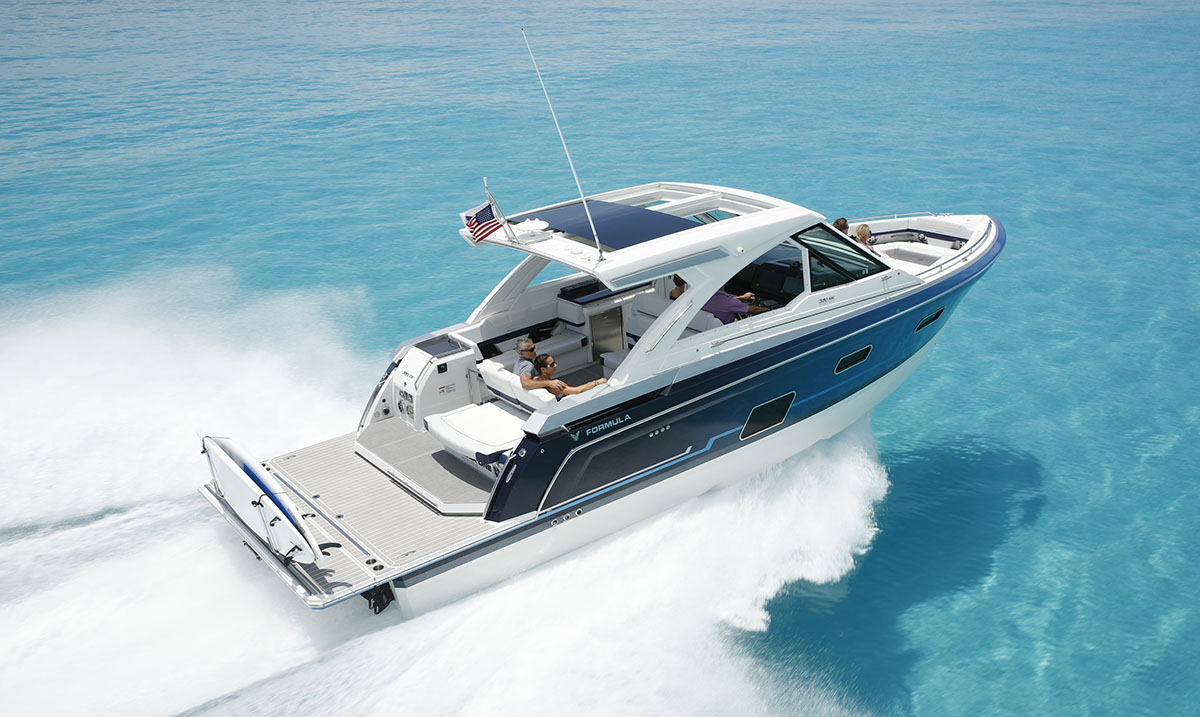 I have to admit, and I know it hasn’t even been six months since we got the news, I’m still let down that Formula decided to shelve its FAS3Tech line of stepped-hull V-bottom sportboats (read the story). This new 380 SSC, which is based off the sea-carving 21-degree-deadrise FAS3Tech stepped hull, helps ease some of that pain though—especially after hearing what Speedonthewater.com test team member John Tomlinson of TNT Custom Marine had to say after driving one in North Miami in August.

Tomlinson took the wheel of the 38-footer powered by twin Mercury Racing 520 engines and Bravo Three XR drives said the fully loaded Formula, which has a base price of $888,000 with twin MerCruiser 8.2 MAG HO engines and cracks a million dollars with every option, performed up to his expectations. 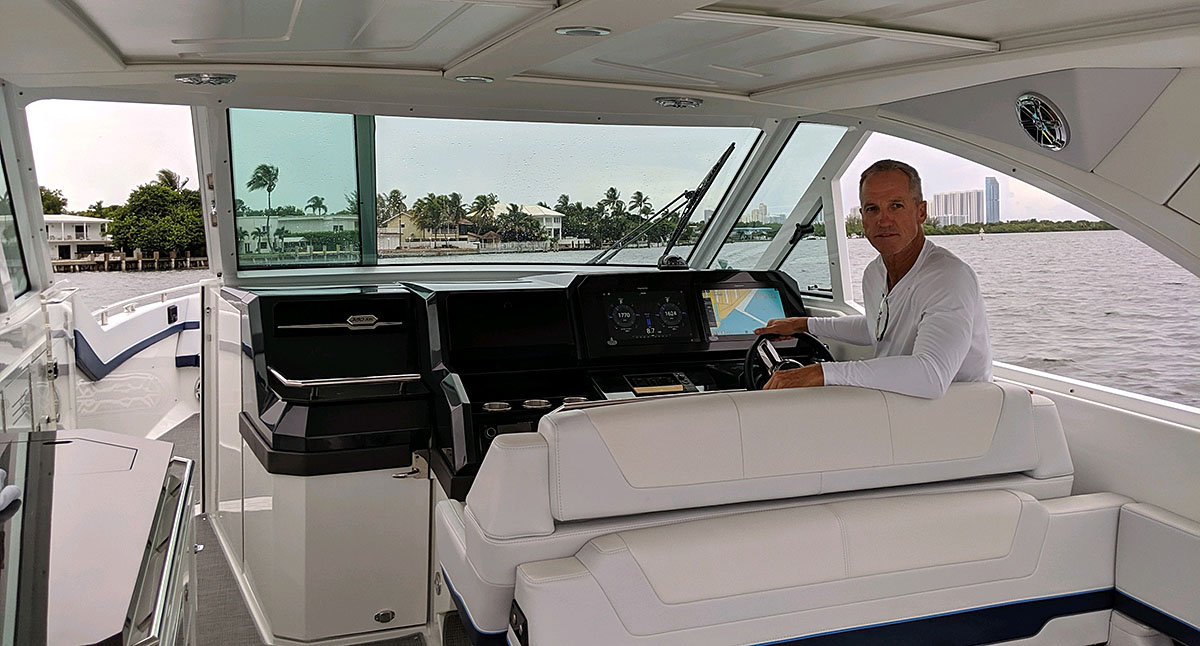 “As you can guess, the boat takes a while to get on plane—it’s a heavy boat, like 23,000 pounds half full of fuel,” Tomlinson said. “When we put the tabs down, it definitely helped. It took 16 seconds to get to 20 mph and about 10 seconds later we were running 30 mph. From there it starts going along well.

“It’s not a fast boat, but it rides nice, like Formulas do,” he continued. “It’s definitely a tank and can handle big water. We had it wide open, a little more than 5,000 rpm, and it cruised through everything at 50 mph.”

The boat’s best cruising fuel consumption range is between 3,500 and 4,000 rpm, which Tomlinson said was around 35 to 38 mph. At that speed, the engines get 0.8 mpg, equating to approximately 180 miles. Tomlinson added that he liked that the boat cruised relatively slow—he said the minimum on-plane speed was 23 mph. His favorite part though was the boat’s amenities. 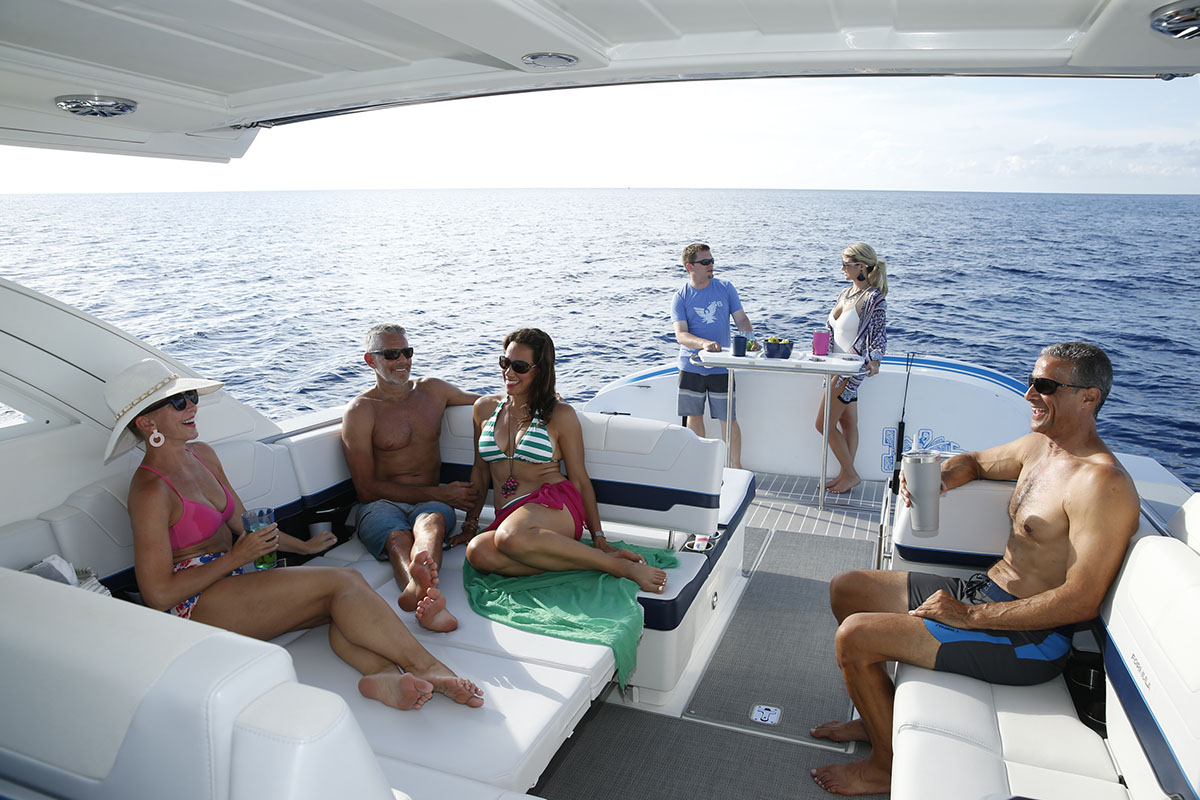 Formula’s new 380 SSC has plenty of seating options available up front and aft of the triple helm position.

“It’s a nice boat; it’s packed with more creature comforts than any 38-footer I’ve driven,” Tomlinson said. “It has a big windshield, a lot of shade and some neat storage places. The retractable sunroof in the hardtop is cool. Formula also offers a built-in shade that extends aft from the coupe to cover the back of the boat and another one for the open bow that looks easy to set up.

“The visibility from the helm was awesome and the seat comfort was good,” he continued. “The air conditioning was blasting so that was nice. The cabin, which sleeps four, was nice, too. It’s a roomy boat overall. And it has a huge swim platform with an extended hydraulic section that lowers down into the water.” 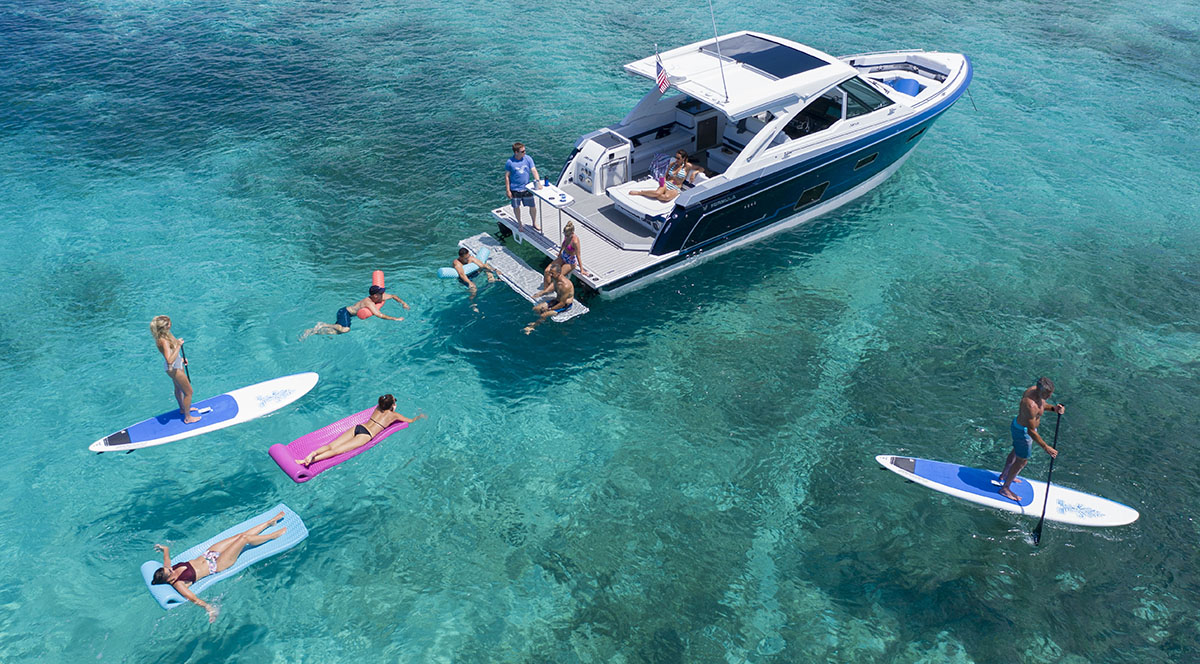 In terms of entertaining, the 38-foot Formula checks all of the boxes.

A full-width hardtop with a top-to-bottom windshield and unique sliding bow window and bow access door to port allows for an open, inviting cockpit experience. The fiberglass hardtop with a full-width motorized glass sunroof is a nice touch, and the interconnected SmartZone seating, from the expansive bow to triple helm seating and U-shaped lounge aft, provides plenty of choices.

The outdoor kitchen is where it really gets fun. An expansive Corian countertop, a fiberglass molded sink with glide-away cover, an Elka faucet, a stainless Isotherm pullout fridge, a Cuisinart blender, a dedicated trash container, a paper towel holder and a full bank of StarBoard drawers to keep your cooking tools protected from the elements provide everything you need to entertain. There’s also an available YETI Tundra 35 cooler that glides out from an under-seat compartment at the helm and a 120-volt Kenyon electric grill that can be perfectly positioned in the aft cockpit, offering a separate zone for any creative outdoor chef.

Like Tomlinson said, the Formula offers a lot for its size. You’d be hard-pressed to find another 38-foot bowrider that boasts a full-width cockpit experience and true overnight capabilities for four thanks to a fully appointed cabin with 6 foot, 5 inches of headroom, and is also capable of tackling inland adventures or offshore journeys. It just might be the perfect Formula.