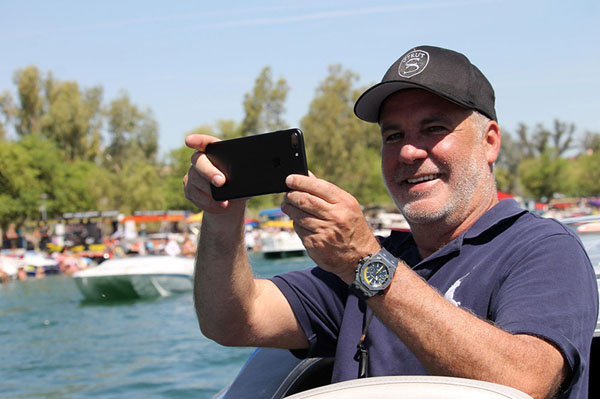 Between spectators checking out his boat in the start parade through the Lake Havasu Channel to the run to Topock, Daniel Hafid seemed to enjoy the Desert Storm Poker Run on Friday. Photo by Jason Johnson

Every April for the past 12 years, the sights and sounds of the Desert Storm Poker Run have been a part of my life and my story telling between my job at Powerboat magazine and now Speedonthewater.com. Well I guess that’s not 100-percent correct since the organizers of the popular event in Lake Havasu City, Ariz., decided to move it to the first week of May this year.

Traveling to Lake Havasu in early May wasn’t the only thing new for me in terms of last week’s Desert Storm Poker Run. It also was the only time I’ve ever been in an Outerlimits Offshore Powerboats V-bottom on the Colorado River-fed lake and it was my first time doing the poker run with a first-time participant. Both of those experiences were courtesy of Outerlimits’ Dan Kleitz, who helped coordinate more than 10 Outerlimits that were in town for the event, and the boat’s owner, Southern California performance boater Daniel Hafid, who picked up his low-hours 2014 Outerlimits SL 52 with twin Mercury Racing 1350s just in time for the 2016 boating season.

Named Da Racing with a home base of Newport Beach, Calif., the 52-foot V-bottom sits on a lift behind Hafid and his wife Ronnie’s home in the beautiful harbor and pulls much of its duty running to and from Catalina Island with occasional jaunts to Dana Point and Long Beach. Hafid, who is a member of Southern California Offshore Performance Elite (SCOPE), and his family owned four Fountain Powerboats offshore V-bottoms before purchasing the Outerlimits. He said the allure of Lake Havasu—along with the chance to meet some more Outerlimits owners—prompted him to register for this year’s poker run. 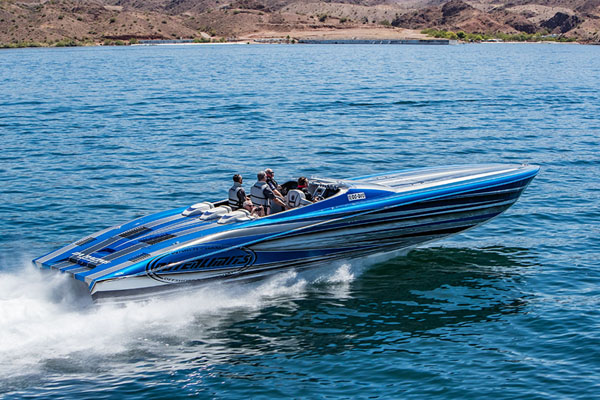 Lucky for me, my speedonthewater.com business partner, Matt Trulio, and Craig Wallace, national sales manager for REV-X Products, Hafid had a few extra seats so we could enjoy the run as well. Not only was it fun to be in one of the largest and most powerful boats in the event that could handle any water conditions that came its way, it was cool to be able to get some first-time perspectives from Hafid, Kleitz and Wallace. All of them seemed to really like the start parade through The Channel and under the London Bridge. They also got a kick out of the idle through the scenic Topock Gorge on the north end of Lake Havasu.

While Hafid is likely to visit Lake Havasu again, he said he prefers boating at home in the ocean.

“We try to get out most weekends if the weather allows,” he explained. “Often we get up in the morning, check the moorings at Catalina and run out there for lunch. The Outerlimits is like driving a Rolls Royce in the ocean. Even when it’s a rough day we can cruise anywhere between 40 to 60 mph. Of course, it’s even better when you can go faster.” 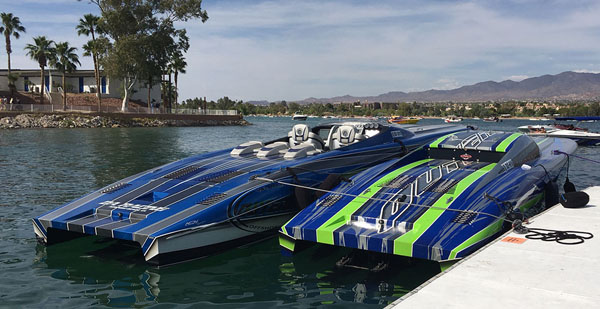 Hafid’s SL 52 looked right at home next to Joe Sgro’s canopied SV 43 Outerlimits that made the trek to Lake Havasu from Rhode Island. Photo by Jason Johnson

Hafid said the fastest he’s driven the boat by himself is 128 mph in Long Beach Harbor—the boat’s top speed with Kleitz behind the wheel is 141 mph.

“So many people have told me you can’t go boating in California because there’s nothing there,” Kleitz said. “I’ll tell you what, there’s more to do there than I thought. When I delivered the boat to Daniel, we went to Long Beach, Catalina and Dana Point. You can even go to Marina del Rey, San Diego and Ventura if you want to be adventurous. We’ve had some fun here in Havasu, too. There are not many places to go, but the scenery is nice all around.”

With Desert Storm under his belt, Hafid said he’s likely to attend the Lake of the Ozarks Shootout in Missouri and the season-ending Key West Poker Run hosted by the Florida Powerboat Club in November. In between, his hometown SCOPE Poker Run in September is on the calendar as well. He welcomes anyone to come join him and the SCOPE crew in the Pacific for a memorable run.