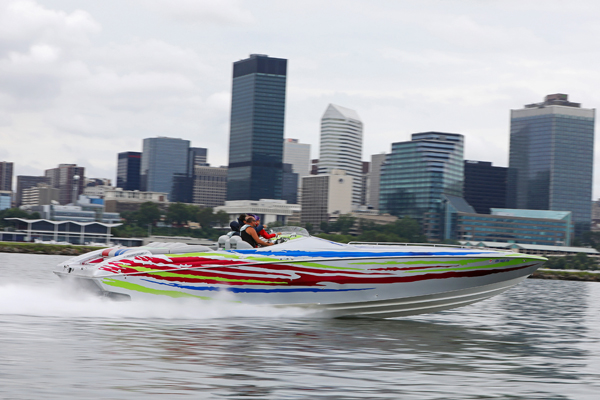 Elite Poker Runs organized and produced three events this in 2017, including this one in Mentor, Ohio. Photo by Jeff Helmkamp/Helmkamp Photos

Anthony Scioli is one of the most ambitious, hard-working and charismatic people I know in the high-performance powerboating world. So if the Buffalo, N.Y., area-based restaurant owner’s Erie, Mentor and Ray Nuchereno Memorial poker runs—which he organized under the Elite Poker Runs LLC banner—don’t happen in 2018, it won’t be for lack of effort or commitment on his part. Much as he loves organizing poker runs, and as good as he is at it, his decision will be purely economic.

“I lost money this year,” Scioli told me in a telephone interview yesterday. “So though I have dates for 2018 Erie and Mentor events set on my schedule, I’m not going to make a decision on running them again until January.

“I love what I do with organizing events,” he added, then laughed. “I just can’t lose money doing it.”

At issue for the 40-year-old father of the three, whose wife Sara took time away from her beauty salon business to work alongside him at all three events this year, are sponsorship dollars. Simply put, he doesn’t have enough of them. Though he has a couple of loyal supporting sponsors for the Erie and Mentor events, he needs a few more to make them happen.

As professional full-time poker run organizers Stu Jones of the Florida Powerboat Club and Bill Taylor of Poker Run America can attest, sponsorship money forms the financial backbone of the poker run business. Entry fees alone aren’t enough. Though poker run participants who balk at today’s entry fee prices won’t be convinced, that’s just reality according to those who actually organize and produce these events for a living.

Don’t get me wrong. Scioli doesn’t believe he’s “entitled” to anything, much less owed success simply because he wants to organize and produce a few poker runs a year. But after three years in the trenches with little financial success—but a whole lot of unwavering support from those who have participated in his events as well as his wife and at least one journalist—and some bad luck with water conditions and weather, he’s taking a very hard look at future.

“It will be interesting, for sure, to see if people step up for sponsorships,” he said. “I have two guys who are always willing for Erie and Mentor. So I don’t know what’s going to happen. We’ll see in January.”