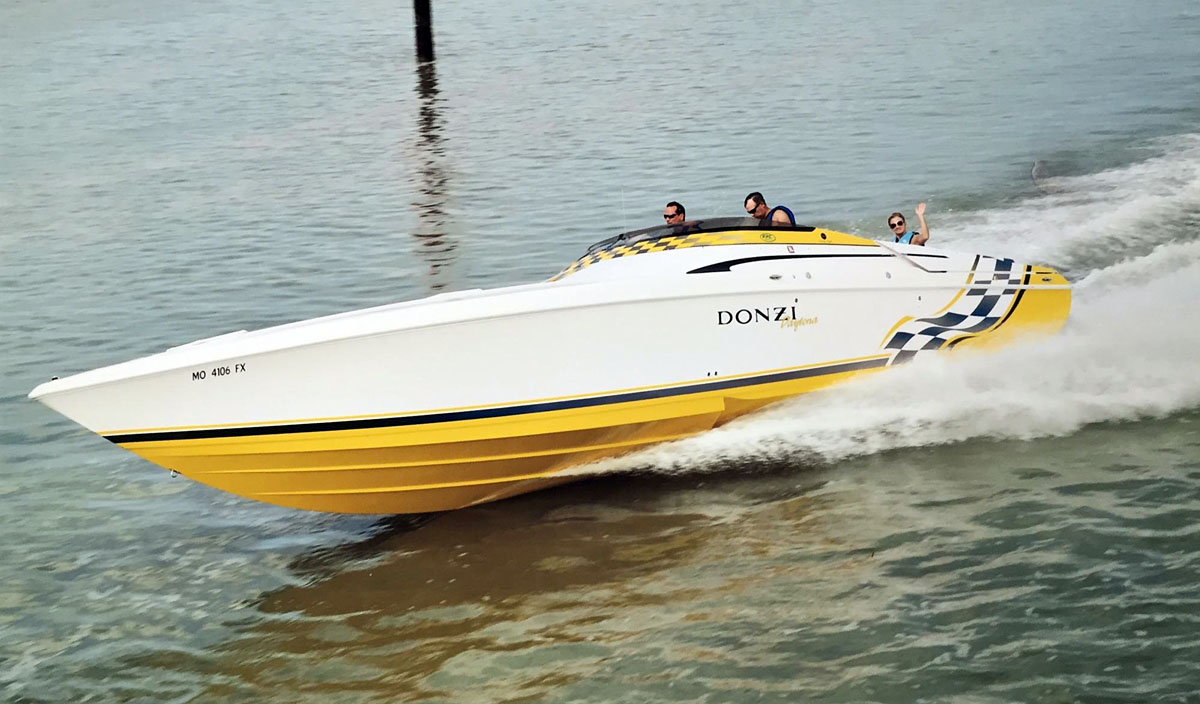 Mark and Holly Wilken plan to run their Donzi 38 ZX Daytona in the Support Our Troops Poker Run.

With just three weeks to go, Illinois performance boaters Mark and Holly Wilken can’t wait for their most favorite event of the year. That’s because on Thursday, June 25, the Wilkens will meet the soldier who they will be hosting for the following day’s Support Our Troops Poker Run on Missouri’s Lake of the Ozarks.

For the last seven years, the generous group behind MidwestBoatParty.com has organized the fundraising event that benefits H.E.R.O.E.S. Care in Fenton, Mo., and The Global Orphan Project in Parkville, Mo. And the Wilkens, who own a Donzi Marine 38 ZX Daytona powered by twin Mercury Racing 575SCi engines, are one of dozens of participants who make sure to put the event on their schedule every year.

“We spend many of our weekends at Lake of the Ozarks—we love boating there,” said Mark Wilken, who owned a Baja Marine 38 Special before the Donzi. “We don’t miss the Support Our Troops Poker Run because it’s for such a good cause. We’ve done the poker run with and without soldiers, and the experiences when we’ve taken the military members with us have been incredible.

“Most of the soldiers have never been on a poker run or seen such a nice variety of boats together like this,” he added. “I always tell anyone who rides with us that we’re not the fastest boat out there but we’re going to have a good time. How can you not at Lake of the Ozarks?” 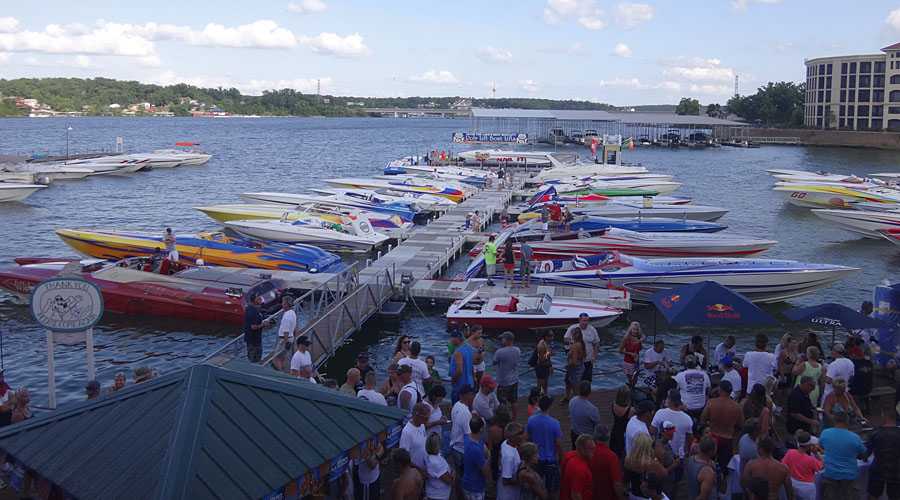 Once again, Dog Days will host the poker run dinner and awards party on Friday evening.

According to Ed Champion, who helps organize the run with Jeff Huebner and Amber Gisham, the event is expecting to set a new benchmark this year by providing close to 50 rides for soldiers either leaving for or returning from overseas deployment. He also anticipates an increase in donations—last year more than $17,000 was raised for H.E.R.O.E.S. Care and $5,000 for The Global Orphan Project.

The go-to-guy behind Lake Ozarks Marine, one of the event’s title sponsors, Champion said if anyone is interested in hosting a soldier for the run to contact him at [email protected] He also made sure to thank the crew at Poly-Lift Boat Lifts for its support of the Support Our Troops Poker Run year in and year out.

Joe Jerome, the founder and president of H.E.R.O.E.S. Care, has been involved with the poker run from the beginning and referred to the event as an integral fundraiser for the organization, which provides complete and proactive support for members of all branches of the military and their families through pre-deployment, deployment, family reintegration and post-deployment. 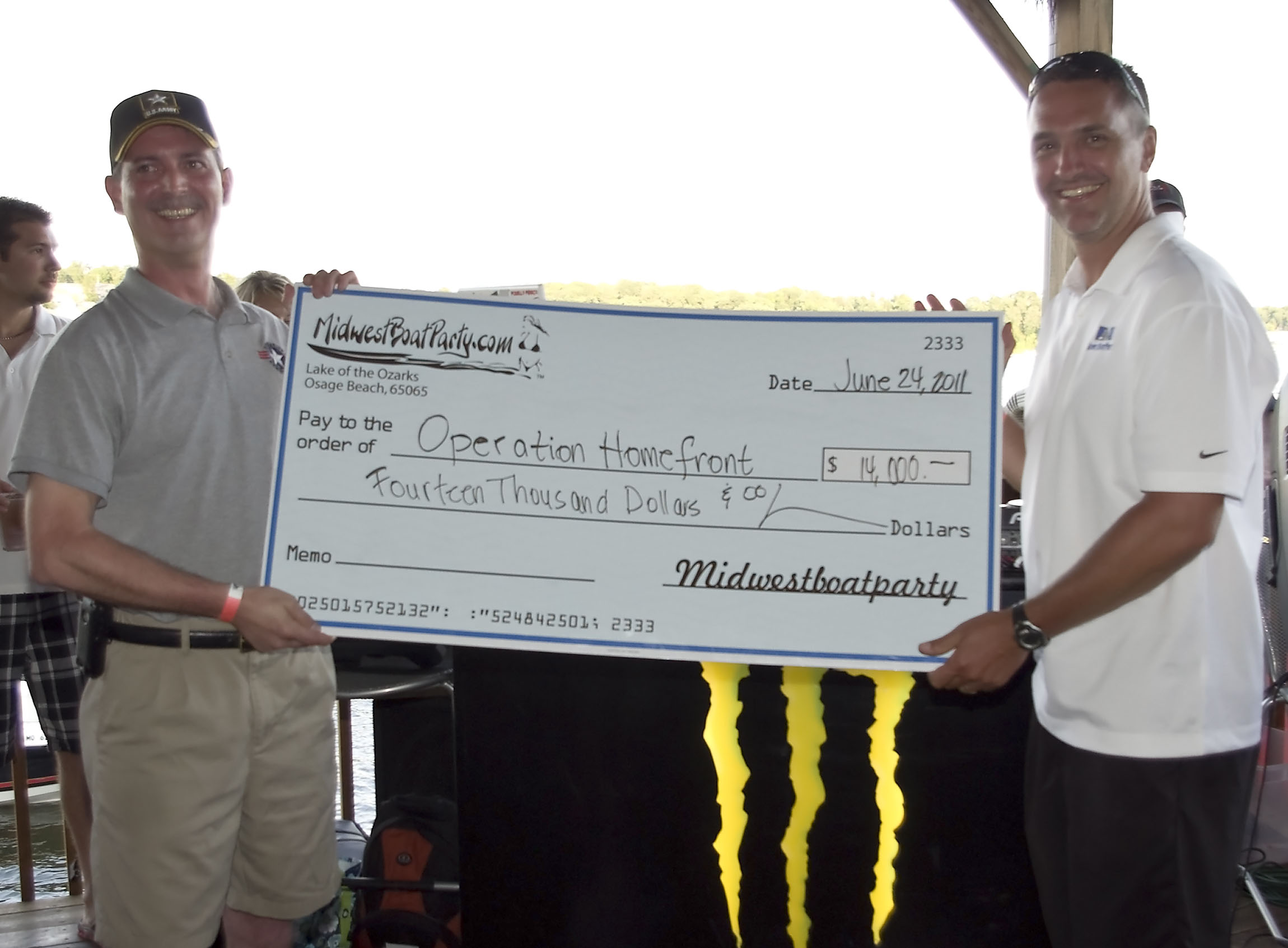 “I’ve seen the poker run and the amount of soldiers who get to participate in it grow exponentially over the years,” Jerome said. “Every one of the military members lucky enough to attend the event is blown away by the captains and their generosity and graciousness. The experience is so special—it’s an incredible morale booster.

“Thanks to the support of MidwestBoatParty, with the money raised we’re able to continue an unprecedented system of support for military members as well as their families,” he continued. “A key component to the event’s success is that the participants know that 96 cents of every dollar raised goes back to the troops.”

Visit the event website for a complete schedule and more details on the 10-stop Support Our Troops Poker Run.