By mid-morning, the scene today on McCulloch Boulevard in Lake Havasu City, Ariz., will be one of borderline chaos. That just comes with the territory of moving in more than a mile of high-performance catamarans and V-bottoms, exotic tractor-trailers, choppers, dirt bikes, sand rails and all manner of motorized goodies onto both sides of the street for tonight’s famed Desert Storm Street Party.

Though the exhibits open at 1 p.m., the event won’t really get cooking until dusk. And then it will become an elbow-to-elbow affair with thousands of visitors from in-the-know performance-boat fans to folks who have never seen anything like the hardware display on Lake Havasu City’s best-known thoroughfare. When attendance peaks, just crossing the street will become a challenge. 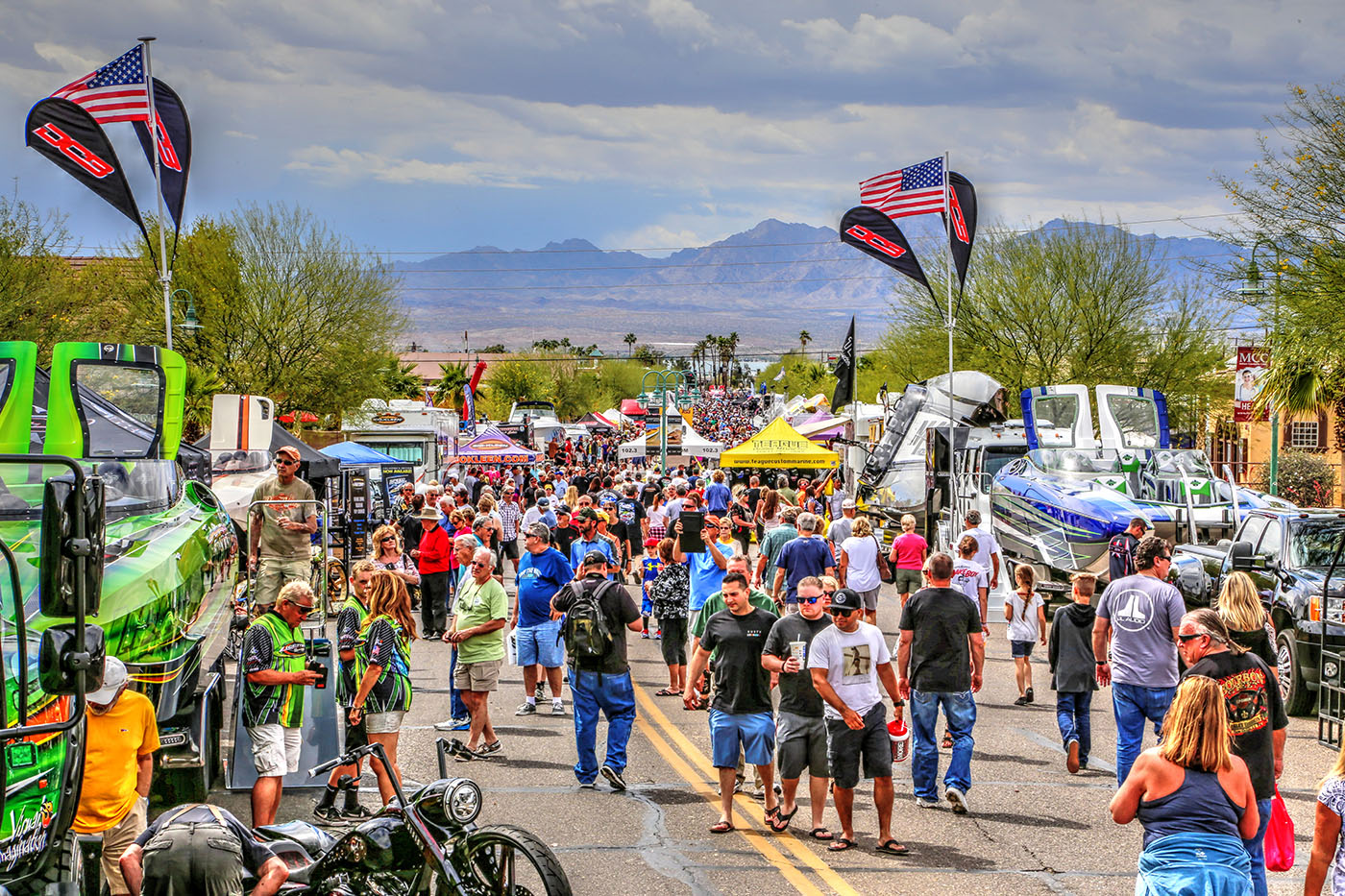 Starting this afternoon, the Desert Storm Poker Run Street Party is the mother of all such exhibit-based events. Photo by Jeff Helmkamp/Helmkamp Photos.

Desert Storm bash—the first such event of the 2019 go-fast boating season—is the mother of performance-boating street parties, the one by which all others are measured. An immediate hit when it was added to the Desert Storm event roster, it inspired other organizers to add such displays to their events. Sponsored by Waves And Wheels, the annual Shootout On The Strip meet-and-greet festival in advance of the Lake of the Ozarks Shootout and Super Cat Fest in Central Missouri has become a hit in and of itself. Likewise, the Florida Powerboat Club’s Poker Run Village during its annual Key West Poker Run is for all intents and purposes just a three-day-long street party, though the FPC displays set up after the actual poker run.

And while it doesn’t have as many boats on the street, the annual Boyne Thunder Poker Run Street Party in Boyne City, Mich., is a charming, small-town affair that draws big crowds.

Though each of these happenings has its own character, they all have two things in common. First, they give event participants and spectators something to do together off the water. Second—and most important—they engage their local communities, and nothing is more important for go-fast powerboating event organizers. Difficult as you, the diehard performance-boat lover, might find it to believe, not everyone shares your passion. Even in hotbeds such as the Lake of the Ozarks and Lake Havasu City, there are locals who’d rather not have a go-fast boating circus come to town.

So anything an organizer can do to build buy-in off the water is positive. Though mostly negligible for exhibitors, the economic impacts of such exhibits can be significant for local business, particularly restaurants and watering holes. (The go-fast boating crowd is, for the most part, a hungry and thirsty group.) Forward-thinking event organizers such as the folks behind the 1,000 Islands Charity Poker Run in upstate New York and the Four Horsemen Poker Run in the wilds of Wisconsin have begun adding their own mini-exhibits and boat shows the day before their fleets take to the water.

Of course, most fledgling street festivals don’t currently approach the scale—and likely never will—of the Desert Storm, FPC Key West Poker Run Village and Shootout On The Dam happenings. But you have to start somewhere and the thinking behind adding such happenings is sound.

Without today’s Desert Storm Street Party, McCulloch Boulevard would be quiet tonight. Instead, it will host thousands of people who will come to ogle the go-fast boating hardware, most of which will take to Lake Havasu tomorrow for the poker run. The sheer bio-mass—and for the most part the community buy-in—will be impressive.

And there’s nothing wrong with that.