You are at:Home»Power»High-Performance Powerboating Isn’t Dead 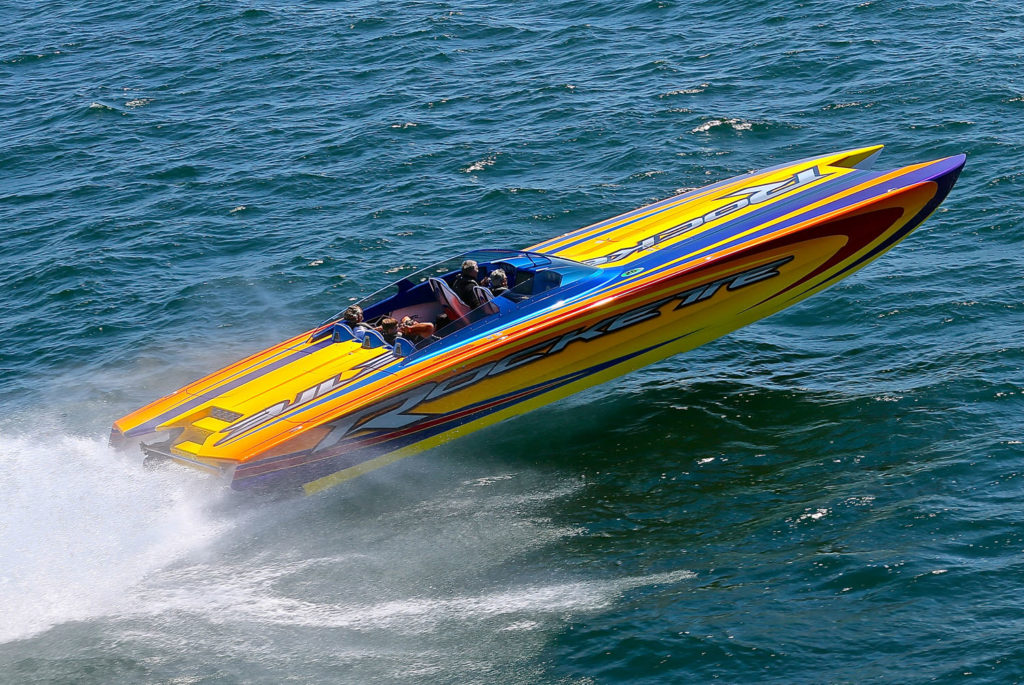 In an impressive achievement, this Skater 438 catamaran recently ran 180 mph on the Lake of the Ozarks in Central Missouri. Photo by Pete Boden/Shoot 2 Thrill Pix.

Tell me that the high-performance powerboat industry is smaller than it once was and you’ll get no argument. Heck, when I started with Powerboat magazine in 1994 the likes of Baja, Fountain and Donzi were building hundreds of boats each year. Independent marine engine builders were everywhere. More than a few companies made tidy profits selling aftermarket parts. Yes, those days are gone and never coming back.

But none of this is a news flash. It could even be a script for Captain Obvious in one of those mind-numbing Hotels.com commercials.

In fact, the story of this industry’s severe contraction since the mid-2000s is so old and tired that anyone still telling it—for whatever reason—needs to find a new story. Because that negative and pointless tale isn’t getting any fresher.

Of course, for professional, economic and personal reasons, I’ve come to love the high-performance powerboating world. I’m blessed to count many people in the industry and consumer sides as friends, some of them dear. Whether they’re building boats or buying them—new or used—I root for their success. You could even say I’m invested in it, which is why, despite the fact that my speedonthewater.com/offshoreonly.com colleague Jason Johnson and I occasionally have to report the negative, we focus on the positive. Guilty as charged.

But my passion for the go-fast boating world doesn’t blind me to its current reality, which is simply this: The industry is much smaller than it used to be. It has become downright artisanal.

And, once again, that’s yesterday’s news. That, plus a few bucks, will get you something sweet and full of empty calories at Starbucks. 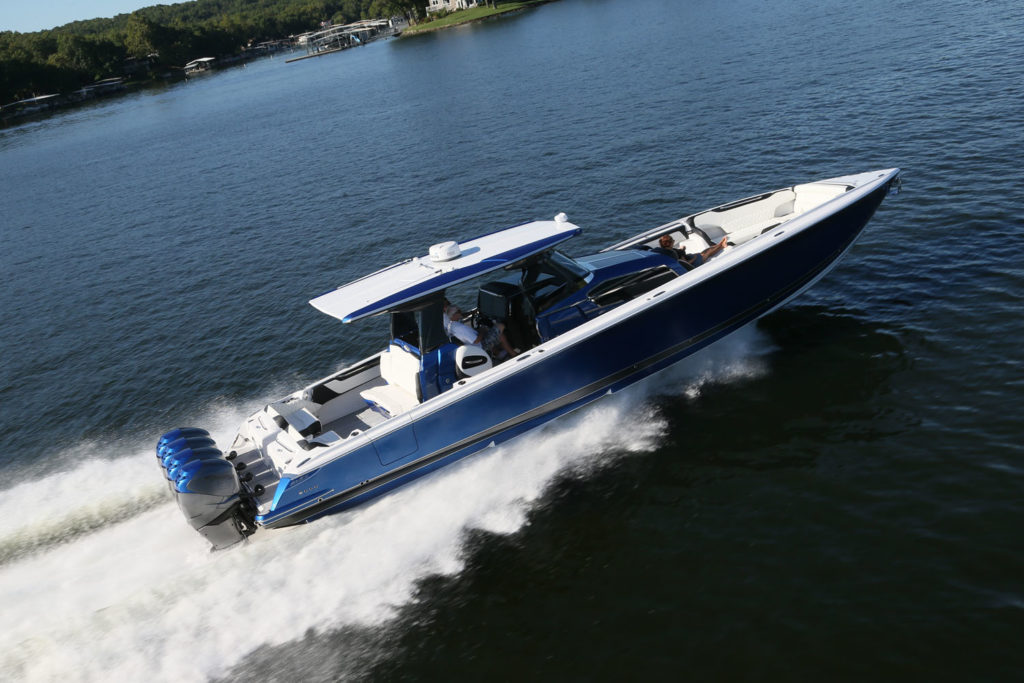 Sometimes, it seems as if the naysayers get a perverse pleasure out of denigrating the industry, the activity and—by proxy—the people still passionately involved in them. It’s almost as if they’re saying “I’m done, so you should be done and if you’re not done you’re an idiot.”

Peter Hledin, the founder and owner of Skater Powerboats (and my favorite industry realist), isn’t anywhere near done. Nor is Skip Braver at Cigarette Racing Team; the Schaldenbrand brothers and their ownership-team at Sunsation Powerboats; Brett Manire, Mark Waddington, Myrick Coil and their people at Performance Boat Center; Randy Scism, Tim Gallagher and company at MTI; Jeff Johnston, Tony Chiaramonte and the rest of the crew at DCB Performance Boats; Trond Schou, Nils Johnson, Geoff Tomlinson and the group at Nor-Tech; John Cosker, Ryan Zvitski and Greg Weber at Mystic or Randy and Kim Sweers at FB Marine Group. 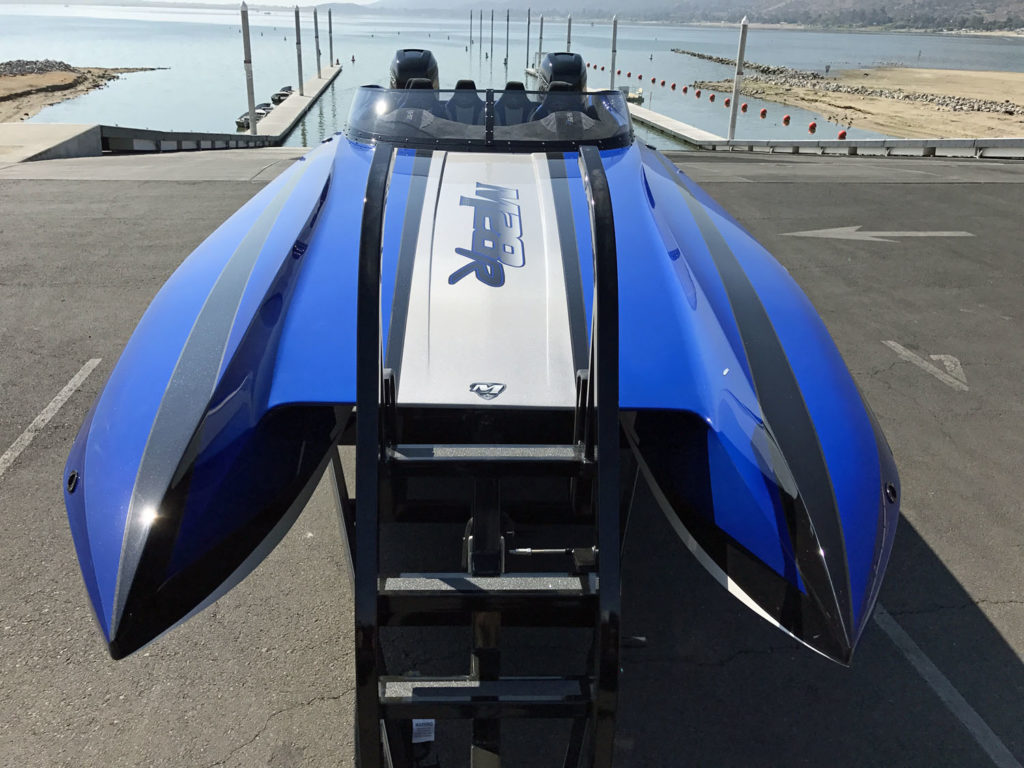 I’m also reasonably sure that Iconic Marine Group owner Fred Ross—who currently is investing millions of dollars into bringing back the Fountain, Baja and Donzi brands—isn’t within a million miles of done.

While my longtime friend Dean Loucks of The Art Of Design isn’t handling as many go-fast boat paint jobs as he used to, my relatively new friends Stephen Miles of Stephen Miles Design and Chris Mills of Boat Customs are crushing it. Nature abhors a vacuum, you see.

I could go on, but that’s a decent, quick-glance cross-section of folks on the industry side who are anything but done in an industry that is anything but dead.

Something more to consider: Participation in go-fast boating world events, primarily poker runs, is better than ever.

Have certain events declined or disappeared? Absolutely. But others have replaced them and are thriving. 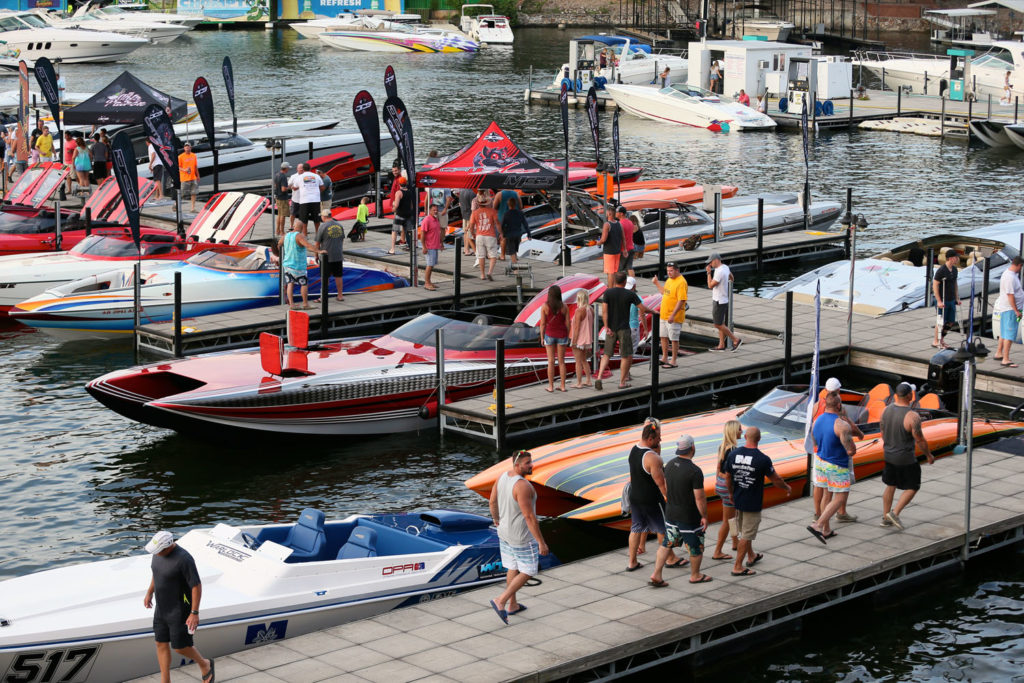 Like many events, Super Cat Fest is better than ever. Photo by Pete Boden/Shoot 2 Thrill Pix.

The Boyne Thunder Poker Run sells out shortly after it opens. In just its second year, this summer’s 1,000 Islands Charity Poker Run in New York has already attracted more than 100 entries. Last year’s Lake Powell Challenge brought in $500,000—the largest amount raised for charity by a single event in the history of go-fast boating—for the Juvenile Diabetes Research Foundation. The Old Hickory Fun Run Raft Up and Pub Crawl in Tennessee has grown exponentially in the past few years, and the Four Horsemen Poker Run is on track to have its biggest fleet to date.

With its schedule adjusted to four key events, the relatively new Western Michigan Offshore organization is thriving. And with a consistent average of 150-plus boats, the Florida Powerboat Club’s annual Key West Poker Run sure isn’t going anywhere. Nor is the Lake of the Ozarks Shootout and Super Cat Fest, Desert Storm, Big Cat, the Tickfaw 200 or the Texas Outlaw Challenge. Back from a one-year hiatus, Ron Szolack’s Skater Fest is poised to have its best turnout ever, just as Ryan Beckley’s Joey Gratton Memorial New Year’s Day Fun Run would have had the weather held.

Again, I could go on and on.

So what part of all that says the high-performance powerboat world is dead or dying?

Look, even when the industry was at peak production in the mid-1990s to early 2000s, it faced the same enormous challenge—that of attracting first-time buyers—it has always faced. On that you’ll get no argument, much less a solution though I dearly wish I had one, from me.

But call it dead and you will. Because you’re wrong.