You are at:Home»Projects»An Apache Dream Project

Anyone who pays attention to what I write about on OffshoreOnly.com and Speedonthewater.com knows that I’ve done a lot of stories with Justin Wagner of Waves and Wheels throughout the years. To be sure, Wagner and I have developed a friendship during years of working together on various stories from my Powerboat magazine days to today. 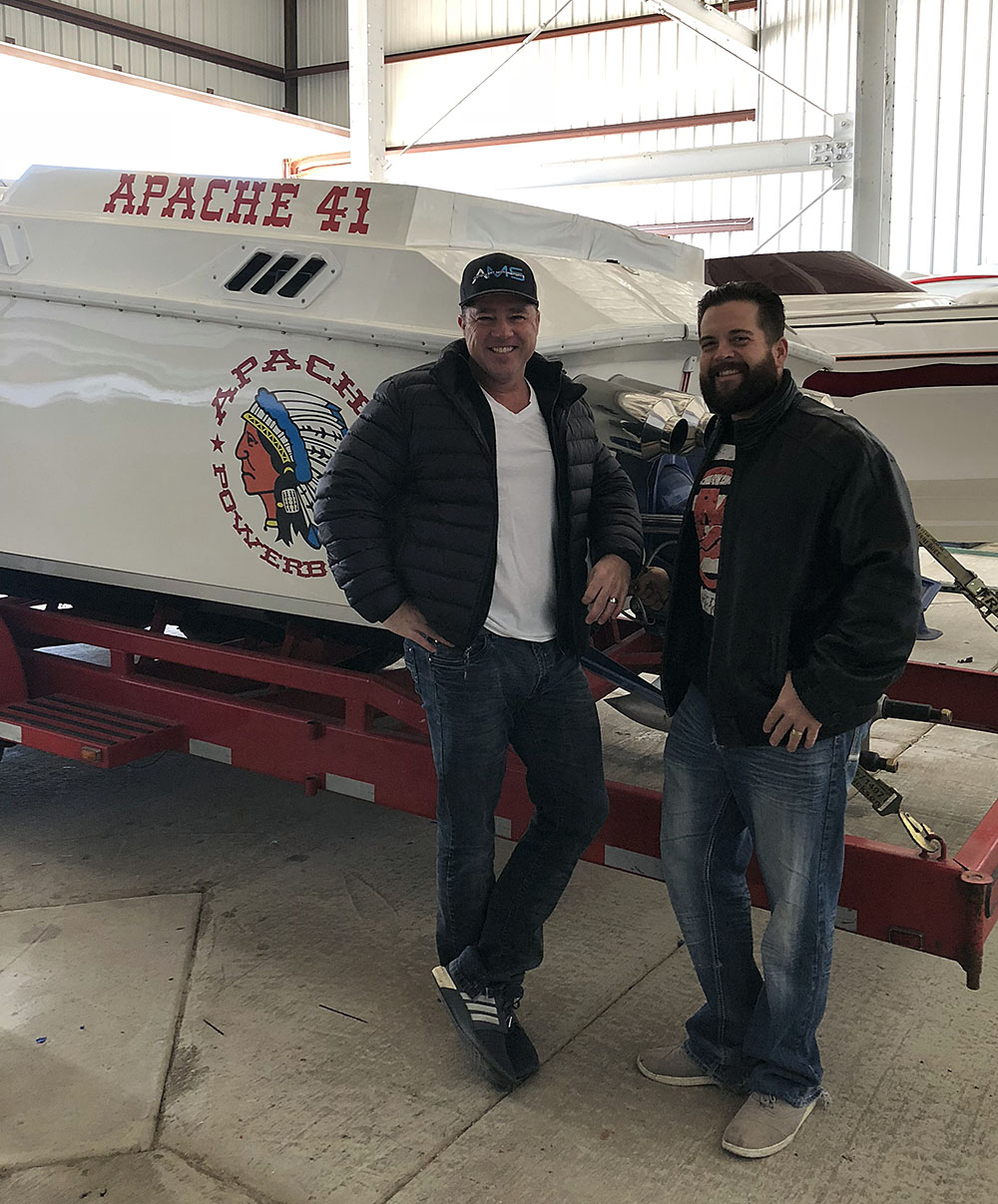 Todd Crossley and Justin Wagner are all smiles standing next to Crossely’s 41-foot Apache Powerboats V-bottom that will soon look nothing like its current self.

But the truth is, I’ve covered so much of his work because, first and foremost, he is a great source of information and he’s good at relaying said information. Second, his work speaks for itself—just ask the customers and manufacturers that he’s done business with since starting his Osage Beach, Mo.-based company in 2001.

Despite all of the coverage, my recent phone call with Wagner was by far the most excited I’ve heard him talk about a project he has in the works—and that includes his Ironman-themed Hustler Powerboats 377 Talon project boat from 2012.

That’s because he has a 1987 41-foot Apache Powerboats—a true offshore V-bottom that many an Apache fan is familiar with, Scalp Hunter—sitting in the storage area of The Boardwalk at Waves and Wheels, the new waterfront marina he opened this summer on Lake of the Ozarks.

An excited Justin Wagner sent this picture and a text message the day the Apache was on its way to Waves and Wheels.

The boat, which is now owned by the equally enthusiastic Todd Crossley, a longtime Waves and Wheels customer, is the first project boat the company has executed that started as a concept with a customer before they even decided on what kind of boat they wanted to find. Wagner said that he and Crossley, as well as Maryland Offshore Performance Marine Center owner Andy Imhof, have been discussing the idea for over a year and started searching for the “perfect boat” earlier this summer.

In Scalp Hunter, everyone involved in the project believes they found that perfect boat.

“I was a V-bottom guy long before I got my cat,” said Crossley, who owns a canopied 44-foot MTI catamaran with twin Mercury Racing 1350 engines. “I’ve owned a few Cigarettes and my dad, Gary, has an incredible Cigarette 42X with twin 1100s and No. 6s. Since I was a kid I’ve always loved Apaches, but we didn’t see a lot of them at Lake of the Ozarks since they’re built to go offshore. So we set out to find one and restore one. Not an exact period restoration though. We want to keep the Apache heritage—we definitely don’t want to bastardize the boat—but make it look like a new Apache, not one that’s been updated or fixed up.

“This boat has great bones and great history,” he continued. “I’ve never done a project like this before and I’m stoked. My daughters who are 14 and 13 are excited about it, too. This one will be much more family friendly boat than the MTI.”

The short-term goal is to have Maryland Offshore go through the whole boat structurally early next year and get it back to like-new condition from the inside out before the “creative” stuff begins. Imhof and his crew will also refresh the twin 850-hp Keith Eickert-built engines and the accompanying No. 3 drives. 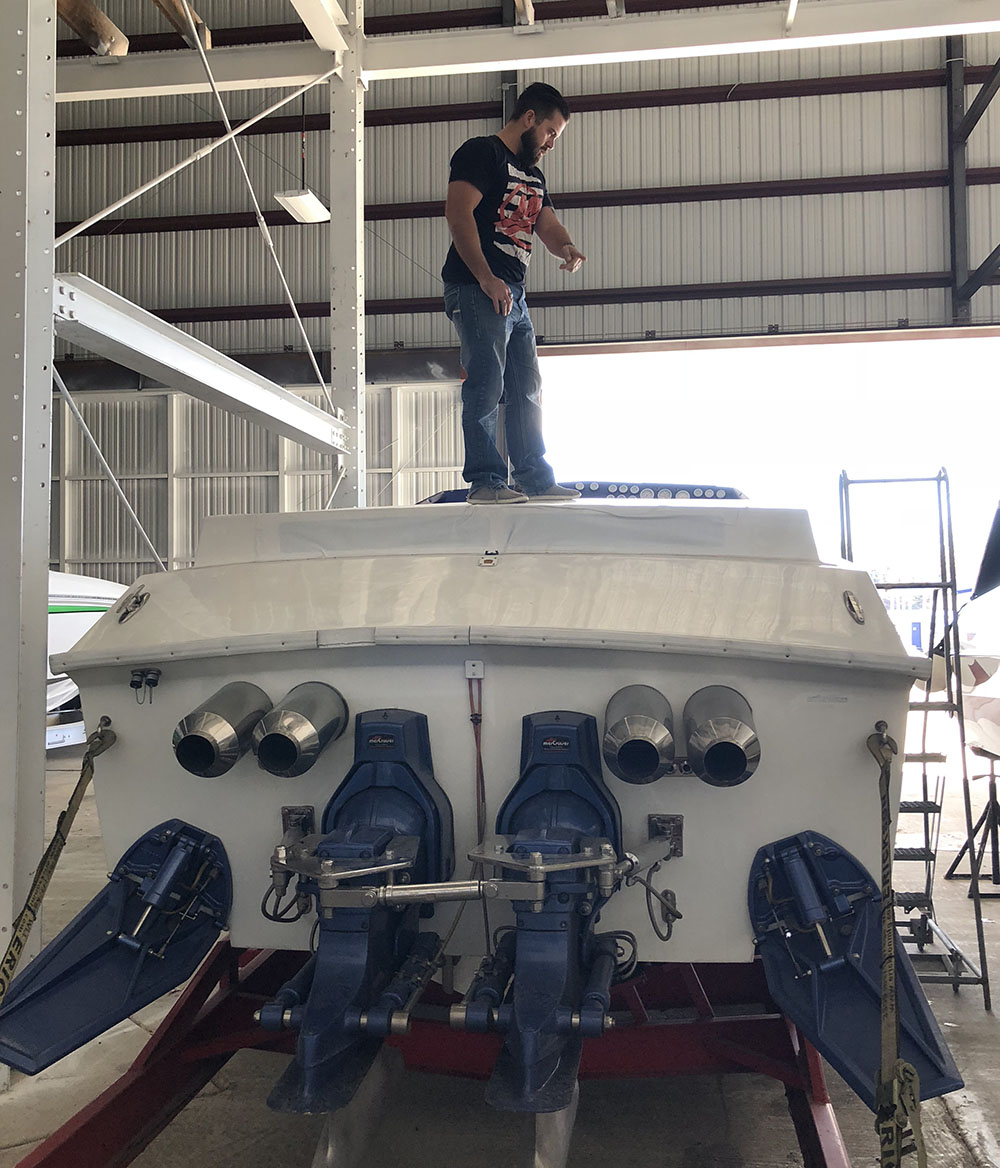 Wagner might be more excited about the Apache project than any project Waves and Wheels has done before.

Wagner said the goal is to fine-tune the custom themed design over the next six months and then start cranking on it so that it can be on display at the 2020 Miami international Boat Show.

“We really want to show this boat some honor, it feels like it has some good soul to it,” Wagner said. “Yes we have a theme—we’ll keep that a secret for now—but we’re going to focus on modernizing the boat while keeping that Apache look. The thing that’s cool about this boat is that the previous owner and the owner before him did a great job of keeping record of the boat. There’s really an incredible amount of history here.

“I’ve asked Todd a couple of times if he wants his money back because I’d love to own this boat,” he continued. “It’s a Kevlar layup with the staggered engine setup, and the boat is in great shape. We’re going over everything to get it all dialed in 100 percent. This is going to be a lot of fun.”