You are at:Home»Racing»Englewood Beach, Baby

For good reason, the inaugural six-race American Power Boat Association Offshore Championship Series produced by the Offshore Powerboat Association and Powerboat P1 got a ton of attention this year. The two organizations, their individual venue organizers and a sea of hardworking volunteers delivered the most successful offshore racing circuit since the early 2000s. Everyone involved, not the least of which were the race teams that showed up in force at each event, needs to take a bow.

But while the OPA/P1-produced series claimed the limelight, OPA also continued with its own race schedule that included two events in New Jersey and one in Maryland. And led by Ed “Smitty” Smith, the organization will wrap the 2019 season—as it has since 2015—next month with its World Championships in Englewood Beach, Fla. 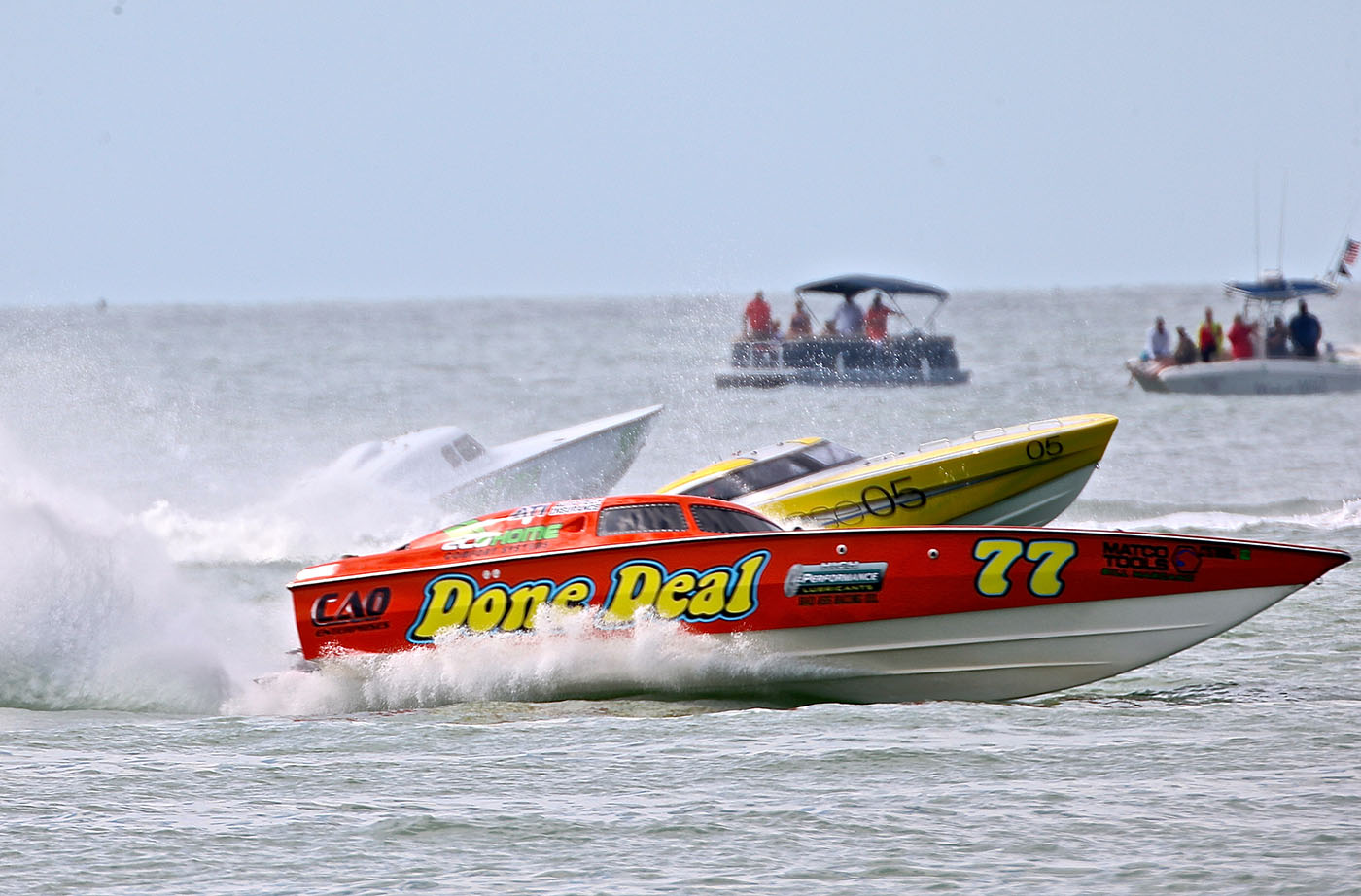 The bulk of the teams competing next month in Englewood Beach will be from the traditional OPA ranks. Photos by Pete Boden/Shoot 2 Thrill Pix.

Most of those teams will come from the traditional OPA ranks from Class 1 to Class 7, as well as the organization’s continually growiing Pro Stock V class. While the Super Stock class likely will have five to seven boats in the field, Miss GEICO and Scuderia Cazzani Turbo are the only Class One teams from the concluded APBA series that currently are committed to racing in Englewood Beach.

If CRC/Sunlight Supply shows—team owner Mike DeFrees is on the fence at this point—Miss GEICO and Scuderia Cazzani Turbo could have some competition in Englewood Beach, though with 1,650-hp engines CRC/Sunlight Supply would be coming in with a significant advantage over its less-powerful rivals if they run in the same class.

On the Supercat-class front, AMH Motorsports of Aaron Hope and Anthony Smith will be joined by the new Outerlimits team of Vinnie Diorio and Simon Prevost in a 39-footer. No other Supercat teams have committed to compete. 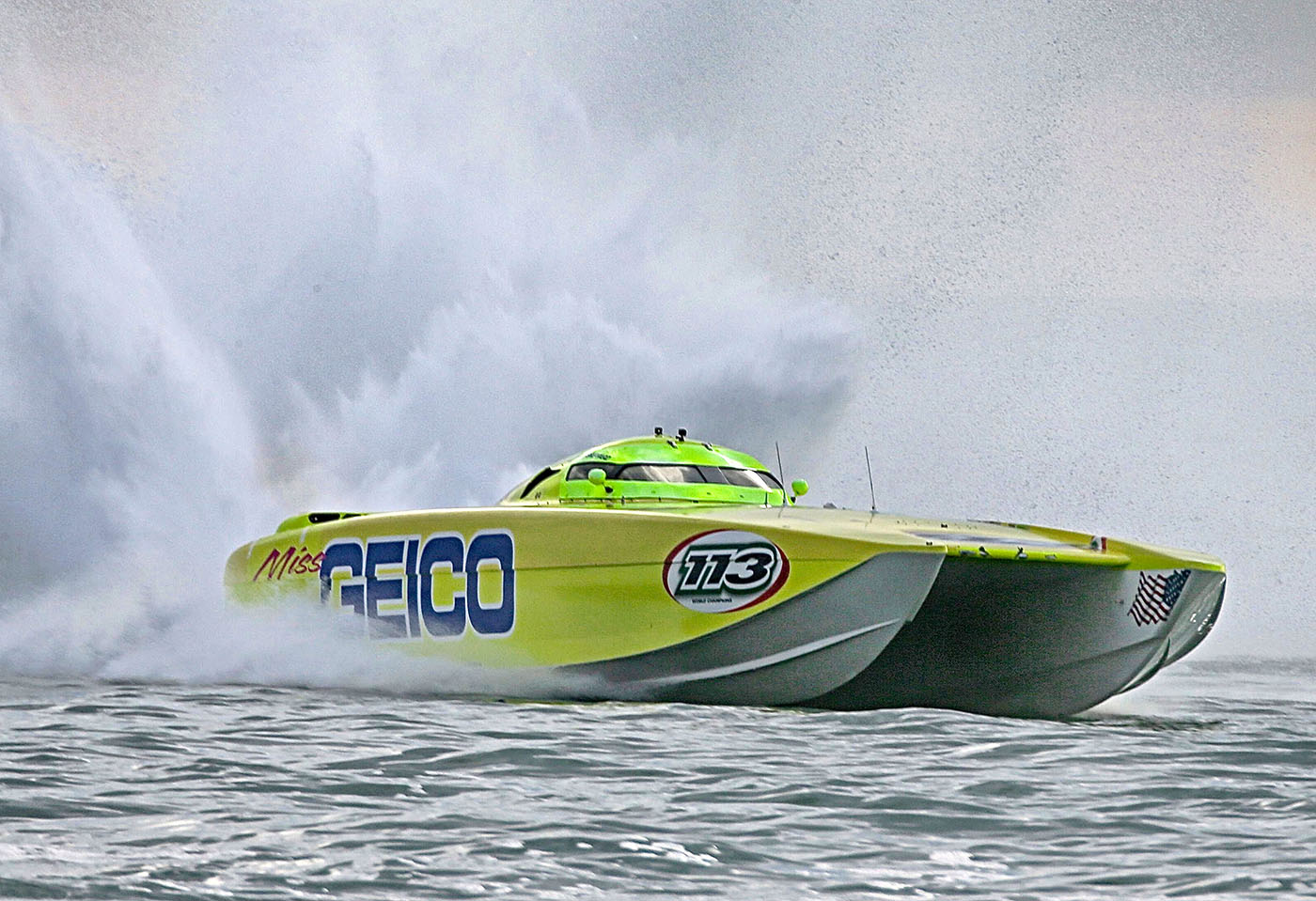 Miss GEICO will have some competition in Englewood Beach this year.

Of course, much of this could change. But given that most of the Supercat and Super Stock classes will be competing at the Race World Offshore event in Key West, Fla., earlier in the month, changes in their plans are unlikely.

Regardless of who shows up, all teams in the OPA World Championships begin with a clean slate. What mattered in the regular season means nothing in Englewood Beach—the OPA teams duke it out in two races on two consecutive days. The teams will compete on Saturday and Sunday, and Sunday’s races are double-points affairs.

Mike Yowaiski, who shared the APBA series broadcast booth with Martin Sanborn, will reprise his role in Englewood Beach.LaBadie, a high-school football announcer in his “spare time,” will join him. (Each day’s racing action will be broadcast live on the OPA Facebook page.)

“We changed the course, which is 4.2 miles long, this year to make it more exciting,” said LaBadie “We went from two turns and two straights to seven turns, and the spectators will be able see the boats cross the start-finish line on the new clockwise course, which was a mile down the beach last year. 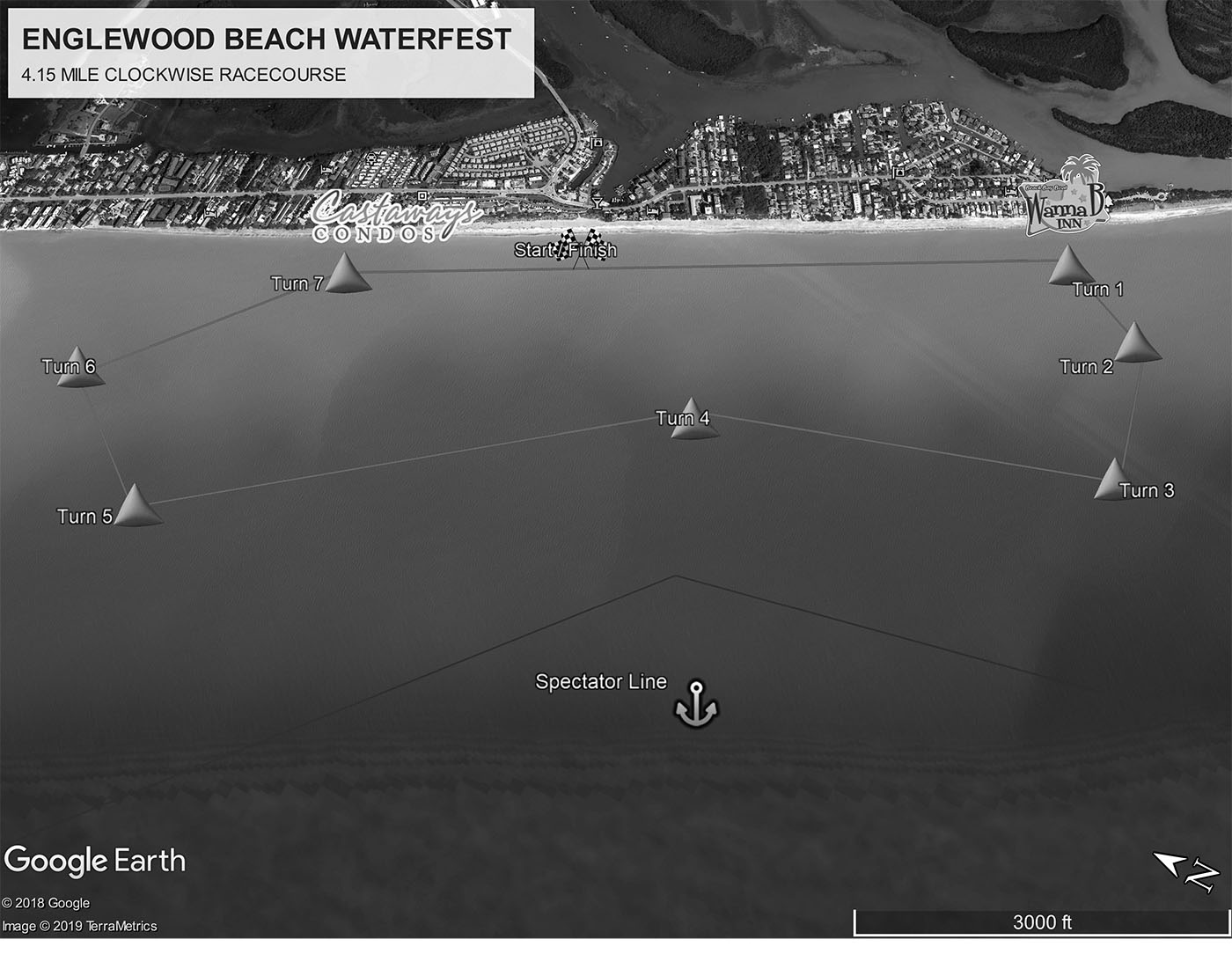 The new-for-2019 Englewood Beach racecourse is full of twists and turns.

“We’re still in the off-season here,” he continued. “We do this to boost business in our local community before the holidays. We are expecting 23,000 spectators over three days. We have a block party downtown on Friday night that attracts 10,000 people. The economic impact last year was estimated at $6 million. Of the 74 percent lodging occupancy rate we had last, 7,400 of those people were from out of town”

According to LaBadie, the event costs the city $350,000 to stage. Once all the costs are covered, the remaining revenue goes to the city’s water conservation initiatives.

“Englewood Beach is 100-percent nonprofit promoter with 501c3 status,” he said. “Every penny goes back to water conservation efforts for the following. Last year, $15,000 was awarded through grants.”

By all accounts, the season-ending venue is an OPA favorite.

“It’s literally the perfect race site,” said Johnny Saris, who competes in OPA’s Class 4 ranks and is a frequent editorial contributor to speedonthewater.com. “You can walk to everywhere you need to go, and the racing is in a proper ocean with a big, long course that can get intense. I love racing there.”

As does most of the OPA faithful. Look for them to turn out in force in Englewood Beach next month.