You are at:Home»Racing»Offshore Success In An Acid Test 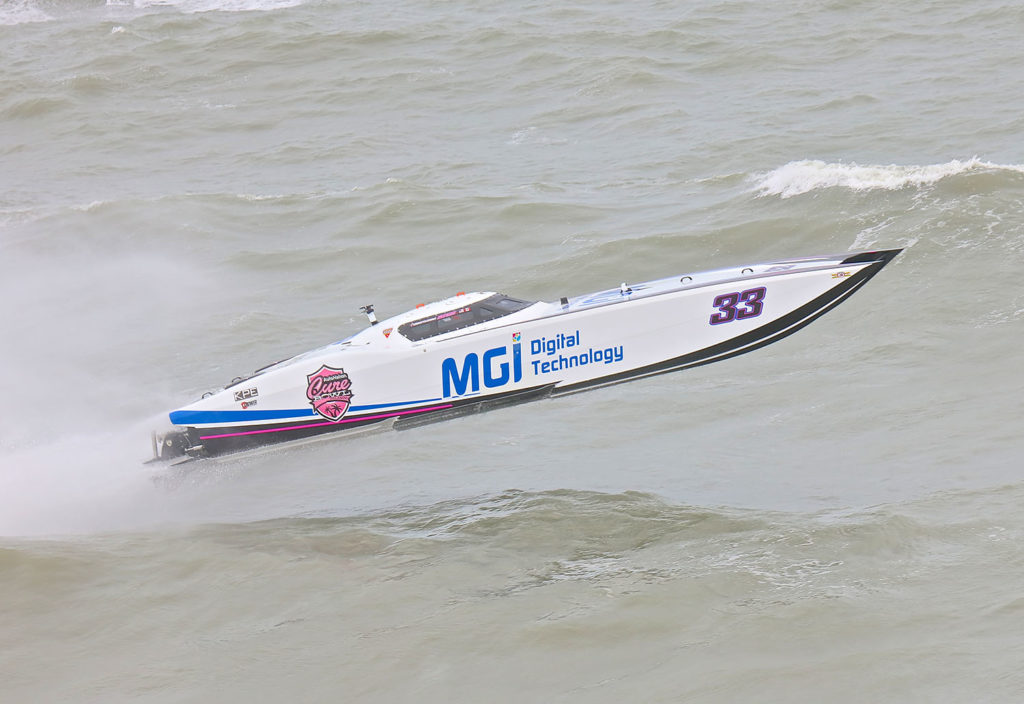 Randy Sweers, the general manager of FB Marine Group based in Pompano Beach, Fla., doesn’t have the big-buck backing of today’s most successful offshore powerboat racing teams competing in Super Boat International’s premiere Superboat class. The veteran offshore powerboat racer, who runs a 40-foot MTI catamaran in that category, makes no bones about that.

So while sponsors are appreciated by a number of teams in the class, they are a necessity for Sweers, who throttles the 40-footer with teammate Glen Hibbard handling the driving duties. That made bringing on new backers MGI Digital Tech and Konica Minolta this season great news for Sweers and company. What’s more, the team took on a new engine builder Tom Keeter of Keeter Performance Engineering of Wichita Fall, Texas.

All of that, plus the likelihood that Sweers and Hibbard would be running solo in their class thanks to the departure of the rest of its members, during last weekend’s SBI season-opener in Cocoa Beach, Fla., made a good showing imperative for the team. The pressure was on.

But then, a couple of great things happened.

First, the waters off Cocoa Beach got nasty for race day. That led to an eye-popping experience for representatives of the new sponsors who were on hand for the Sunday’s contest. Second, Billy Mauff, the owner of the WHM Motorsports team broke ranks, so to speak, with his fellow Supercat Racing owners group and gave Sweers some competition during the contest.

“Once the green flag dropped, I think our sponsors became very, very enthralled with the sport,” said Sweers. “With all the rain on Saturday they really didn’t get to experience the pit area in the best conditions, but on Sunday, well, they’d never seen anything like that before.”

Nor had Hibbard, who is sharing the cockpit with Sweers for third second consecutive season.

“Glen had never run a boat in rough water like that, but he’s a quick learner,” said Sweers. “It was one of those races where, when you looked at the conditions and first got out there, you didn’t even want to run. But it was definitely fun, hard on the equipment but fun.”

To Sweers’ delight, the boat’s new 750-plus-hp engines ran flawlessly. But one particularly hard landing in the five- to seven-foot seas—with the odd eight-footer popping up as an unpleasant surprise now and then—was enough to loosen a battery cable and force a circuit breaker to pop, which knocked the team out of its battle with driver Mauff and throttleman Jay Muller in the 40-foot WHM Motorsports Skater catamaran.

“Running in those conditions, especially near the surf line, with WHM Motorsports was really fun,” said Sweers. “But it was also pretty insane because Billy and Jay would completely disappear dropping down into the trough of a wave, and then come flying up and into the air.”

With their instant electrical issue far from fixable in the high seas, Sweers and Hibbard headed back to the pits, leaving WHM Motorsports to finish the Superboat-class contest on its own. But despite the mechanical glitch, the weekend was a resounding success for the newly-badged MGI Digital Tech-Konica Minolta team. The sponsors were impressed. Hibbard acquitted himself admirably in the roughest sea conditions he’d ever seen. And the MTI catamaran’s new engines held up.

“The boat ran with a great attitude,” said Sweers. “I was really impressed with how it handled the rough water. We went with the smallest propellers we had. We’d have gone with smaller props if we had them—we don’t see conditions like this very often.”

Sweers paused and then laughed.

“In that south turn, we would stand the boat straight up in these huge waves then land, stand it up again, and then land,” he said. “You know, in a crazy way it was really, really fun.”