You are at:Home»Racing»Pumped At Mid-Season: OPA And P1 Leaders Chime In

With the 35th annual Sarasota Powerboat Grand Prix in the books, the inaugural six-race American Power Boat Association Offshore Championship officially reached its midpoint earlier this month. Three races down, three to go. Next up on the schedule is the St. Clair Classic July 26-28 in Michigan, and if it follows the form of the first three contests—and there’s good reason to expect it will—the event will attract its largest fleet in recent years and produce solid action.

Earlier this month, I tackled a mid-season analysis of the points standings for most of the major classes. Only two teams, the impressive Class 4 Simmons Marine and the new Super Vee-class Instigator By Knucklehead Racing, took the checkered flag in all three races. In all of the other classes, the top three to four teams remain in close battles for championship titles. It’s going to be fun to watch, at least from where I sit as a reporter and a fan. 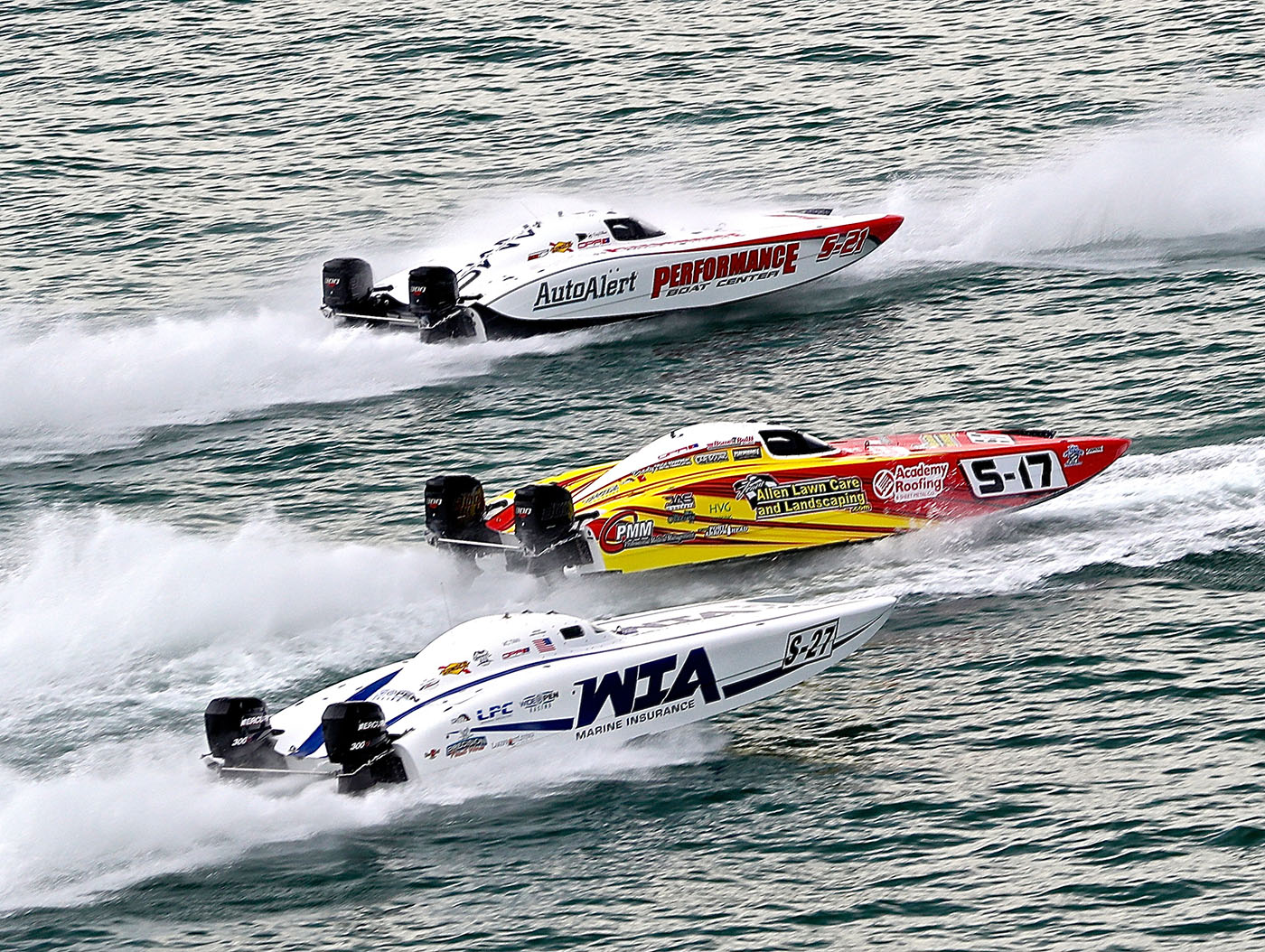 The third of the APBA Offshore Championship Series, the Sarasota Powerboat Grand Prix earlier this month marked the midpoint in the new circuit. Photo by Pete Boden/Shoot 2 Thrill Pix.

And as you’d expect based on the first half of the season, Offshore Powerboat Association president Ed “Smitty” Smith Powerboat and Powerboat P1 chief executive officer Azam Rangoonwala, the main men behind the new circuit, are delighted with their progress so far. They might look like offshore racing’s “Odd Couple”—Smith is a tall 62-year-old veteran powerboat racer from the New Jersey and Rangoonwala is a not-so-tall 32-year-old Londoner who established the Powerboat P1 SuperStock and P1 AquaX circuits—but they work remarkably well together.

“I’m feeling really good about where we are in the sense that we have some serious momentum as well as potential for future,” said Rangoonwala. “We’re enjoying working with the biggest names in the sport and we’re being contacted by some potential sponsors for 2020. The promoters are coming together to collaborate on ideas and more. There’s lots going on and keeping us busy.

“The most exciting part is seeing new fans and faces within the sport, and that is something that I would like to be able to focus on moving forward,” he continued. “Our sport has always been niche but it has the potential to be mass market and I feel like we have the perfect opportunity to do so.”

“Things have gone very well,” he said. “The boat counts are up, though I won’t ‘be happy’ until we hit 100. That’s been my goal since we started way back when.

“Azam and I have the same vision for the sport and are working well together,” he continued “He’s a class act. We don’t get to spend much time together, but over the winter we will work closely on bigger and better things. The goal was to establish the series, and then go after the marketing. Money is the next important step. We have the support of the teams and now we need to support them.”

Rangoonwala picked up Smith’s thread and elaborated on the financial component.

“Obviously, a lot of this requires funding and that’s what we’re working on, bringing in sponsorship to fund the television and livestream to provide the best viewing platform for the sport and spectators,” he said. “But it also requires the other parts of the operation to work perfectly in sync.

“The pieces are there,” he added. “We just need to complete the puzzle and then continue to build.”