You are at:Home»Racing»The Lake Race Effect

The Lake Race is going to be the first race for the recently formed Supercat Racing 750 Owners Group that includes the Performance Boat Center and WHM Motorsports teams shown here in the 2017 Lake Race.

Once again, I’m sitting on my computer at my home office contemplating the decision I made not to attend another outstanding event. Last time around it was the Tickfaw 200 Poker Run in Louisiana four weeks ago. And this—the upcoming barrage of Lake Race activities starting tomorrow on Missouri’s Lake of the Ozarks that has me wishing I was on hand with Pete Boden, speedonthewater.com’s chief photographer, and many of the racers in town—probably won’t be the last time I feel that way this summer.

Just to make myself feel worse for not traveling to Missouri for the sixth annual Lake Race sanctioned by Offshore Powerboat Association, let’s take a look at some of the reasons why the happening has become one of the premier events on most race team’s calendars.

The event kicks off tomorrow with the Festival of Speed hosted by the race’s title sponsor—Big Thunder Marine—at its all-new facility on Bagnell Dam Boulevard. According to Jeremy Anderson, Big Thunder Marine’s general manager, the gathering will include the unveiling of the all-new outboard-powered Donzi Marine 41 GT, along with a few new models from Fountain Powerboats—a 39 NX center console, a 34 LS center console and a 32 Cat—and the Washington, N.C., company’s V-bottom built to challenge the kilo record. The iconic Reggie Fountain should be on hand as well.

Along with testing on Friday, the Lake Race features its annual Meet-n-Greet Street Party starting at 5 p.m. along the historic Bagnell Dam Strip. Then on Saturday, the event kicks into high gear with the competition along the normally flat racecourse in front of the host location, Beavers At The Dam. Opening ceremonies begin at 10:40 a.m., with racing set to start at 11 a.m.

Alvin Heathman, who was instrumental in starting Lake Race in 2013, said he’s hoping this year’s boat count is the biggest yet, but he can never guarantee which teams show up. Not only is Lake Race going to be the first event for the recently formed Supercat Racing 750 Owners Group, which includes teams such as WHM Motorsports, Cleveland Construction, Performance Boat Center and more, there are some Extreme-class teams such as Miss GEICO and Wake Effects that are going to be fun to watch race around the fast track.

The Wake Effects MTI owned by Rusty Rahm is expected to be one of the fastest boats in Saturday’s race.

Like I am, Heathman is particularly excited about the Super Stock class, especially since there are a couple of locally based teams—CR Racing and Team Allen Lawn Care and Landscaping, both rigged by Performance Boat Center—that could be quite competitive.

This could be my favorite part about Lake Race though—it’s inviting to first-time competitors and those weekend warriors who only do a race or two a year. In fact, this year Ed Smith and the team behind OPA have decided to give rookie teams a free entry into Lake Race so they can give the sport a try.

Lake Race has always offered a discounted entry for newcomers, and many times those first-time racers have continued on in the OPA ranks and with other organizations. For example, Missouri’s Mike Wright, who is campaigning his 29-foot Warlock that is sponsored by WIA Insurance at Lake Race and other OPA races this year, is now a world champion following his Class 5 victory in Englewood, Fla., last fall. 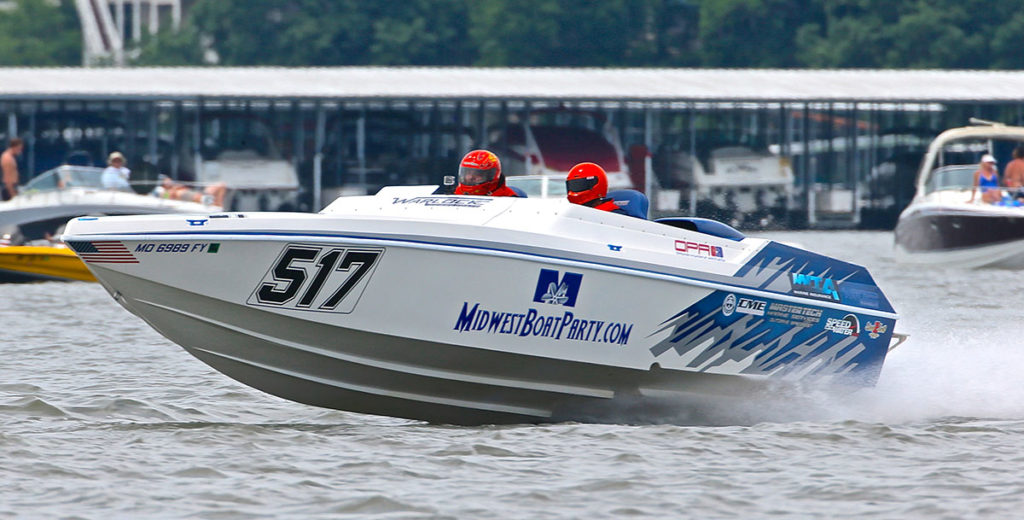 Mike Wright is planning to race his 29-foot Warlock in Lake Race again this year.

In some way, I have to believe that Lake Race deserves some credit for Lake of the Ozarks becoming such a hot bed for race teams as of late. Of course Bob Morgan, Dave Scott and other well-known racers have called the lake home, but in reality there are more teams with ties to the lake competing than ever before.

Best of luck to the race teams this weekend. I’m sorry I’m not there to witness the action firsthand.