You are at:Home»Shattered Records»It Took A Village To Break a Record 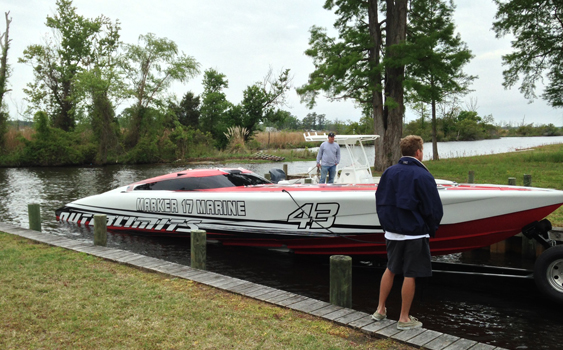 “We knew we were going to be making history,” said Mark Tuck of the breaking of the kilo run record.

When Mark Tuck heard a few months ago that Outerlimits was going to try to break the V-bottom kilometer speed record, he wanted to get involved. A lumber company owner who lives in Smithville, Va., with his wife, Nancy, Tuck is a lifelong powerboat enthusiast who owns an Outerlimits SL 44 V-bottom. So he called his friend Mike Fiore, the owner and founder of the Bristol, R.I., custom performance-boat company.

A kilo run coordinator was born.

Tuck had his work cut out for him. Among his first orders of business was finding a surveyed kilo run course, as surveying a new course is both time-consuming and expensive. That led him to the established a course on the Pamlico River in Washington, N.C., where Reggie Fountain and Ben Robertson had established the V-bottom kilo mark in 2004. But the 10-year-old course needed to be recertified—a kilo run needs to happen over an accurately measured kilometer of water—and that meant working with the original surveyor of the course. That only accounted for a few dozen phone calls. 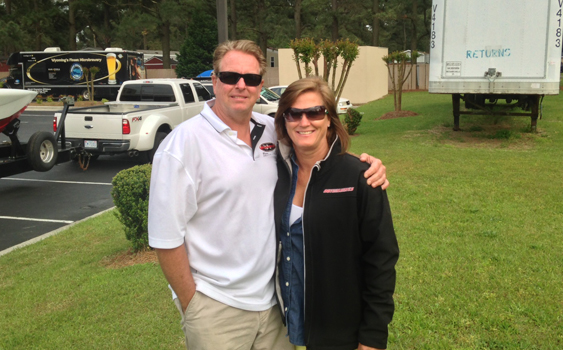 Mark and Nancy Tuck. Said Nancy, “Truth be told, he loves it.”

“We didn’t do this in Reggie’s backyard as an ‘in your face’ kind of thing,” said Tuck. “It made sense logistically. We looked at several locations including Panama City [Fla.] and Biloxi [Miss.]. We even looked at the Salton Sea and the Lake of the Ozarks. But this was a friendly area in which to get it done. Plus, Brian [Forehand] has been down this river a million times. He knows every inch of it.”

Several dozen more calls came through Tuck’s contact with the American Power Boat Association, the domestic powerboat racing sanctioning arm of the Union Internationale Motonautique. Through those calls, Tuck came to know the APBA’s  president Mark Wheeler and events sanction coordinator Cindy Minoletti, as well as Fred Hauenstein and Sherron Winer, the organization’s officials who would be on site to sanction, record and verify the kilo record attempts.

Getting the APBA to provide a special sanction for the event was easy—all Tuck and his wife had to do was form a divisional APBA club, and so the Atlantic Coast Powerboat Association was born. 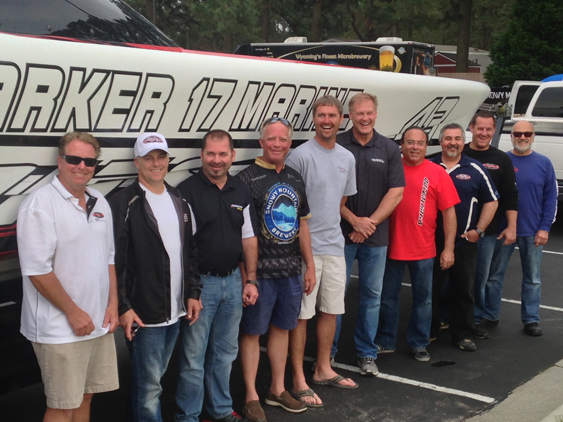 The Outerlimits kilo run crew—a slew of people to coordinate.

Tuck’s “phone tree” was, frankly, ridiculous. It included Fiore and Joe Sgro, the owner of the 43-foot Outerlimits that would be used in the record attempt, as well as fellow Outerlimits owner Dave Scotto, who supplied the Mercury Racing 1650 engines from his own boat for the runs. It included Erik Christiansen, the general manager of Mercury Racing who also is on the APBA’s technical committee, and the Fond Du Lac, Wis., company’s Mike Griffiths. Also on the Tuck’s call sheet were Outerlimits offshore racers Brian Forehand, who would be the main man in the cockpit for the runs,  Dr. Michael Janssen and Dan Davies, city and Coast Guard officials (the team was given “permission” rather than a “permit for  the event) in Washington and a slew of property owners along the shores of the Pamlico River.

While Tuck, who estimated that he put 80 to 100 hours into the project is quick to deflect praise, Fiore is even quicker to give it to him.

“Without him, it wouldn’t have happened,” said Fiore. “Poor guy volunteered.”

“Truth be told, he loves it—he’s on offshoreonly.com every night,” said Nancy Tuck. “He thoroughly enjoyed this.”

Janssen, who sent his 30-foot Snowy Mountain Brewery Outerlimits raceboat to the event, described the organizational chores of putting together a kilo run as a mountain of work. Like Fiore, he credited Tuck with much of the heavy lifting.

“People have no idea what goes into putting on an event like this,” said Janssen. “You don’t just show up on the river and say, ‘Hey, we’re here for a kilo run.’”

Said Tuck, “We did what was supposed to take four months in about 30 days, but we knew we were going to be making history. It was a labor of love, and when you have the kind of incentive you don’t think about the labor.”