You are at:Home»Uncategorized»A Dream Boat Returns

As best friends and coconspirators in all things fun, Dustin Whipple of Whipple Superchargers and Mike Fiore of Outerlimits Offshore Powerboats gave each other endless grief. If you can’t hassle your best friend, who can you hassle, right?

But no one else better hassle your best friend. That’s just how it works.

Said Kennedy (right, with friend Justin Hart), “It’s a dream machine—I knew that when I bought it.” Photo by Matt Trulio/Speedonthewater.com.

Sometime in the fall of 2013, I experienced firsthand the endless banter between those two characters for a day. Fiore, who was married to Whipple’s sister, Shonda, had built a dream boat for his favorite person to tease. In turn, Whipple—and Bob Teague at Teague Custom Marine—had created a pair of supercharged 1,385-hp engines to power the boat built by his brother-in-law and favorite target for daily harassment.

Of course, they didn’t have to ask me twice to come run the sit-down 43-footer with them on Millerton Reservoir in Fresno, Calif.

As for the boat, it was flat-out hot, unquestionably one of the sexiest Outerlimits SV 43 models ever built. From performance to paint, everything about it blew my mind, and the boat was featured in the 2014 January/February of Speed On The Water digital magazine. For best friends Fiore and Whipple, the year ahead looked to be a whole lot of fun with Whipple’s new ride likely at center of it all. 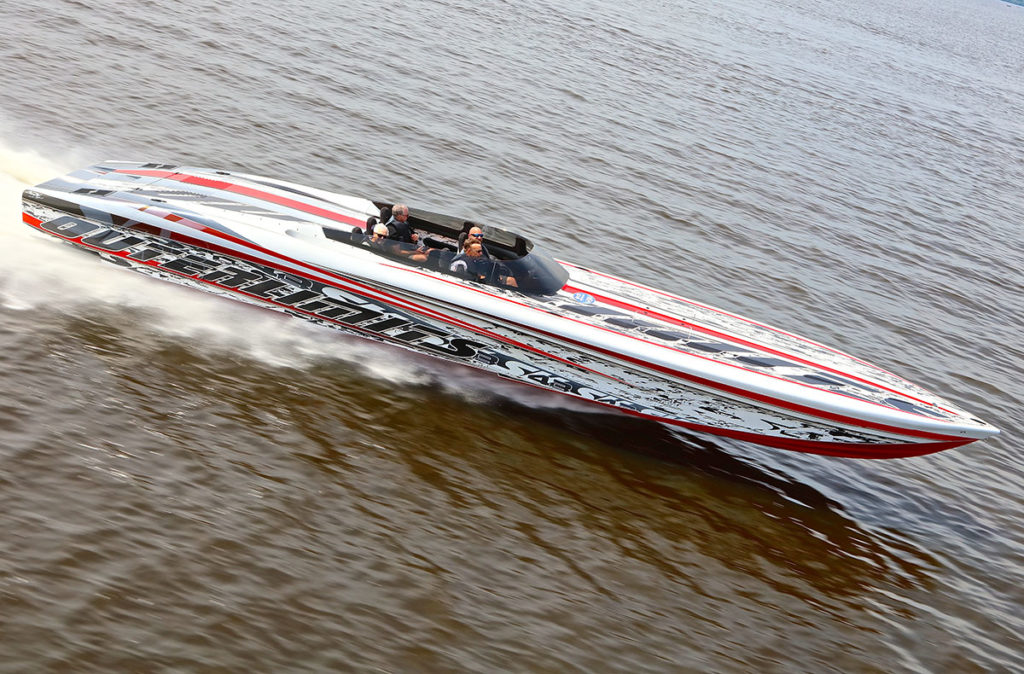 But it didn’t work out that way. Following a crash during the 2014 Lake of the Ozarks Shootout in August, Fiore died. For Whipple, the V-bottom his best friend and brother-in-law had built specially for him became a painful reminder of the heartbreaking loss, so he put the boat in storage.

And in storage it mostly stayed until Wisconsin-based Glenn Kennedy, who had previously owned a canopied SV 43 called Holy Smoke III, purchased it in August 2017. In the market for another Outerlimits but not interested in a new build, Kennedy had reached out to the Bristol, R.I., company’s Dan Kleitz a few months earlier. When Kleitz suggested that he consider buying Whipple’s 43-footer, Kennedy immediately remembered the boat and was interested. 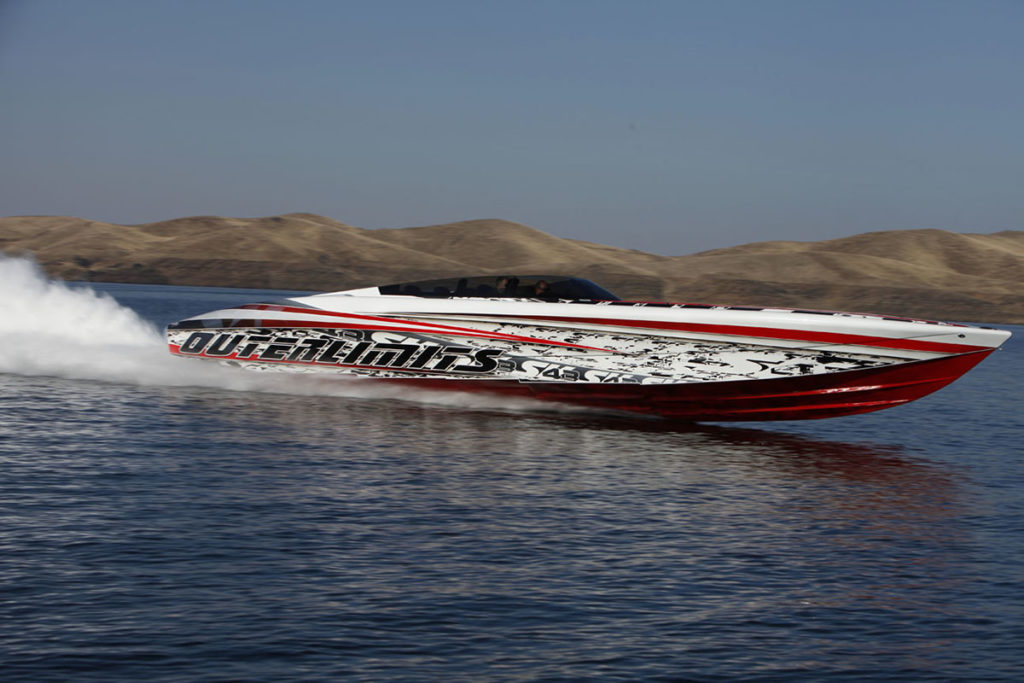 In late 2013, the author shared the cockpit of the 43-footer with then-owner Dustin Whipple and his brother-in-law Mike Fiore. Photo by Robert Brown/Robert Brown Photography.

“The boat had been sitting in storage at the Whipple factory,” he said. “Before we did anything, I suggested that Bob Teague go through the entire boat at his shop and do whatever maintenance was necessary, so they trailered it down there. It was there for about two weeks, and when the work was done Bob hauled it back to Whipple himself. But before that, he took it out for a test run and he was impressed. He said, ‘The boat is 100 percent. You’re not going to be disappointed.’”

On August 23, the three-year anniversary of Fiore’s tragic accident on the Central Missouri waterway, Kennedy ran the boat in Fresno.

“Dustin, his father, Art, and I put it in the water and took it for a ride,” he said. “And it was a rocket ship, to say the least,” he said. “Shonda came by with her and Mike’s two kids and asked me if they could have one last ride. Shonda had been very, very nice to me in our talks on the phone before I got there—they had known of me previously through Outerlimits.

“There was a lot of emotion that day,” he added.

Last Saturday during the Four Horsemen Poker Run in Oshkosh, Wis., Kennedy treated his friend Justin Hart, Boating magazine writer Charles Pluddeman and me to a day on the water in the boat that Fiore and Whipple had created together. I had not seen, much less ridden in, the 43-foot beauty since the unforgettable day in late 2014 when I shared the cockpit with a couple knuckleheads who—like the brothers they were and always will be—couldn’t stop teasing each other.

It was bittersweet in the purest definition of the word.

“It’s a dream machine—I knew that when I bought it,” said Kennedy. “It’s a special boat. People kept coming up to me at Four Horsemen and asking, ‘Do you realize what you have?’ I do. It’s unique. It’s a timeless piece.”