You are at:Home»Uncategorized»Parveys Turn To Turbochargers

It’s hard not to root for the big, bad Black Thunder V-bottom each year at the Lake of the Ozarks Shootout in Central Missouri. The owner of the boat—Minnesota’s Dennis Parvey—is easily one of the nicest, smartest, most humble human beings you could ever meet. He also has one of the craziest need-for-speed desires that only and he and his son, Jason, have been able to satisfy as they’ve rocketed along the event’s one-mile and now, as of two years ago, three-quarter-mile courses for the past two decades. 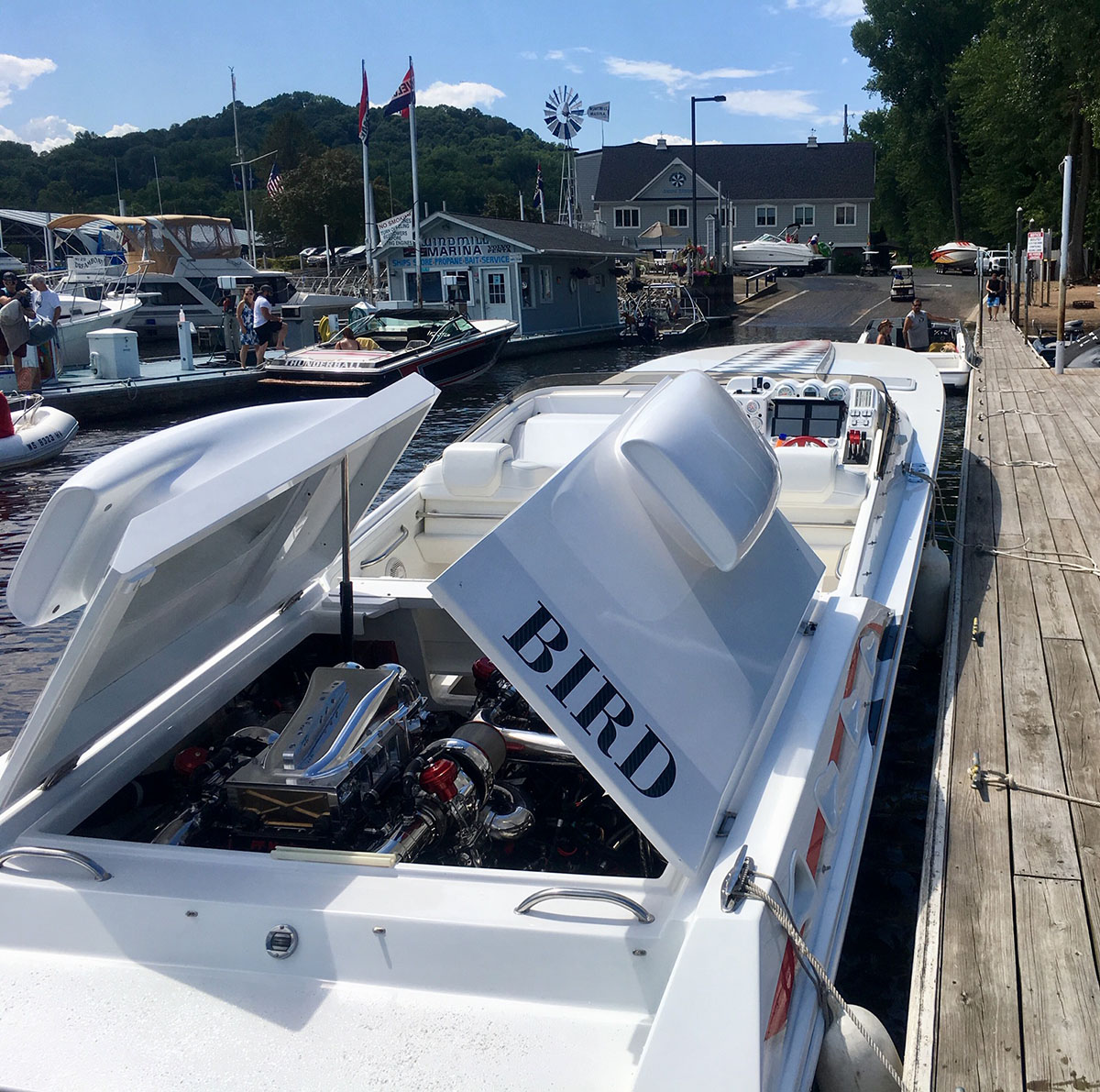 So when Jason, the 32-year-old son of the 67-year-old engineer turned dentist, told me that he and his Shootout Hall Of Fame father were working hard on a turbocharged repower of their 43-foot V-bottom in hopes of making it to the 31st annual Lake of the Ozarks Shootout, I have to admit I was excited about the possibility.

At the same time, I was a kind of surprised since the Parveys appeared to be content, even talking retirement, after laying claim to the fastest V-bottom in event history in 2016—the last year of the one-mile course—with a 165-mph top speed, and then proceeding to record top speeds of 161 mph in 2017 and 153 mph last year on the three-quarter-mile course.

Stupid me shouldn’t have been surprised as the Parveys’ aforementioned need for speed, along with the desire to continually improve technologically and efficiently, is pretty much undeniable. As the younger Parvey explained the project, the motivation behind it seemed to make complete sense.

“We were hoping to pull a rabbit out of a hat and bring a repowered boat to the Shootout; unfortunately it’s not going to happen this year,” said Jason Parvey, who added that his dad sold the superchargers on the pair of electronically fuel-injected, engines with PF Marine intercoolers and has since added twin turbochargers from Carson Brummett Engines. “We’re still very excited about the project, it’s just that there have been a lot of unknowns in the conversion. Turbo motors are a different beast. Anyone who has a good understanding of how engines run and how blower motors work knows that there’s a lot more going on with turbo setups.” 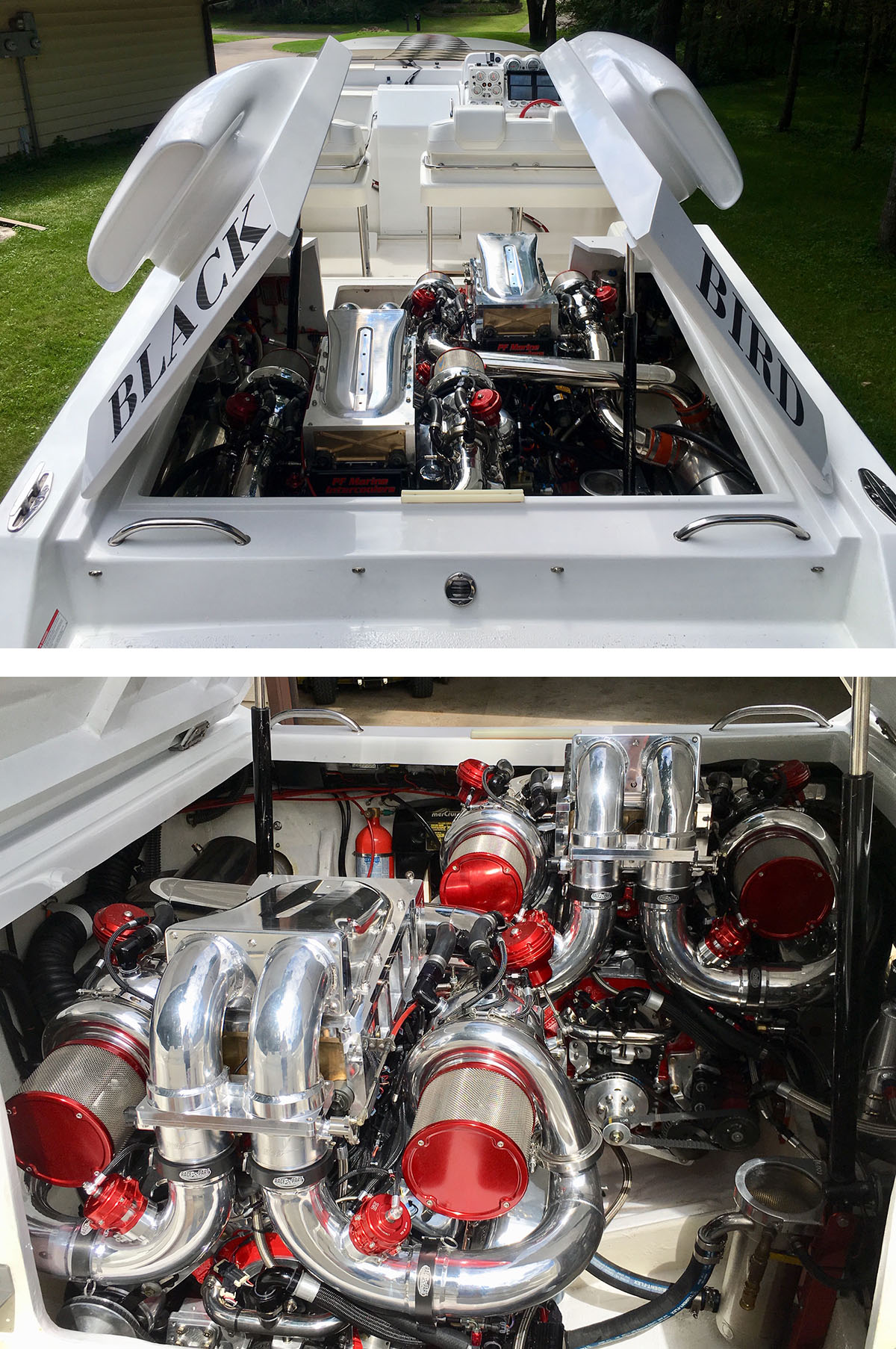 Equipped with Carson Brummett-supplied turbochargers, the power plants look rather impressive in the engine compartment.

While the goal is to bring a serious amount of power to the 43-footer to potentially have it run even faster under less mechanical stress, Parvey said the turbocharged setup is going to make the V-bottom more user friendly all around.

“The turbos have the potential to make a stupid amount of power,” Parvey said. “We don’t know how much because we haven’t put them on a dyno—we don’t really need to with all of the onboard diagnostics we can collect. Like Dennis always has, he’s using our intake, intercooler, throttle bodies, wiring harnesses and other parts. We’ve started the engines and had the boat in the water, and the good news is it idles well, but that’s as far as we’ve got.

“Like the supercharged engines, there are one-offs and it’s going to take more work for us to get them tuned properly,” he added. “Dennis handles the electronics and does all of the tuning himself. He’s building fuel and timing maps and we have a lot of analysis to do after that. Carson has spent lot of time developing his power plants, as have the guys at Factory Billet. We are limited by budget and our available free time, but that doesn’t mean we’re going to stop, it just means we’re not trying to make it happen for the 2019 Shootout.”

One of the nicest things about the turbocharged setup, Parvey said, is that they’ll be able to hit a button at the dash and switch between pump gas and ethanol-based fuel, which in turn makes the boat more flexible for purposes besides running 150 mph in front of tens of thousands of people. Remember, although it has been used sparingly for pleasure purposes, the V-bottom does have a fully loaded cabin. 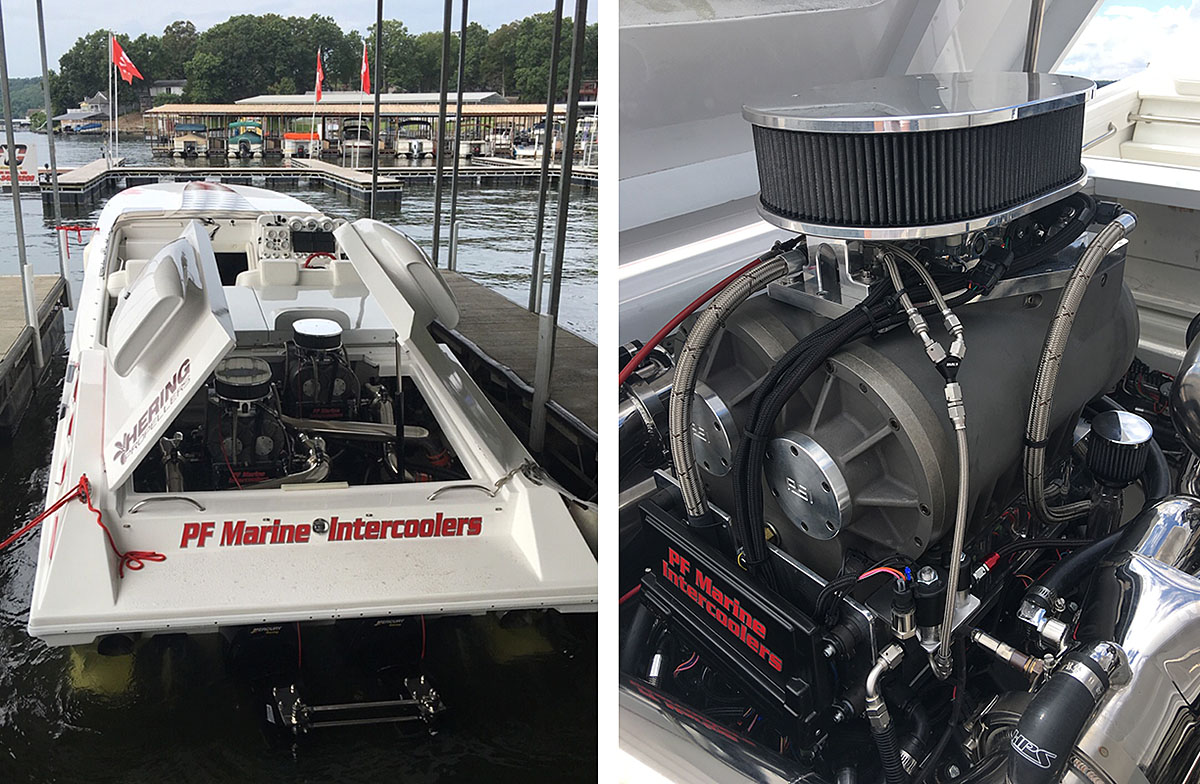 Now named Blackbird, the PF Marine Intercoolers-backed V-bottom is no longer the supercharged monster it was in years past.

“We had our limitations with the PSI—don’t get me wrong it’s a great blower, but it got to the point where we were spinning so hard we’d have to change the belts every run,” Parvey said. “Continuing to do that is just not feasible, so, per wiser judgment, someone found a wild hair on his back and here we are working with turbos.”

Without or without the boat and whether or not they participate in the top-speed contest, it still will be nice to see Jason Parvey at the Shootout in a couple weeks. He told me he plans to travel from his hometown of Dallas to the lake from Thursday through Sunday, but that his dad can’t make it this year.

“One of my dad’s dentists is on vacation so unfortunately he can’t get away this year,” Parvey said. “We’re going to park the project for a month or two and then we’ll get after it—we’re both pretty busy with our day jobs. And we have a lot of time between now and next year’s Shootout.”