Even if I had all the money in the world—and I’m more than a few bucks shy—I wouldn’t buy a fancy watch. I have an iPhone 8. If I need to know the time, I look at it. All I have to do is remove it from my right ear.

But one person’s “Why bother?” is another’s “Got to have it,” and when it comes to pretty, expensive things judgement is silly. Not your money, not your circus, not your monkeys, none of your business, right? 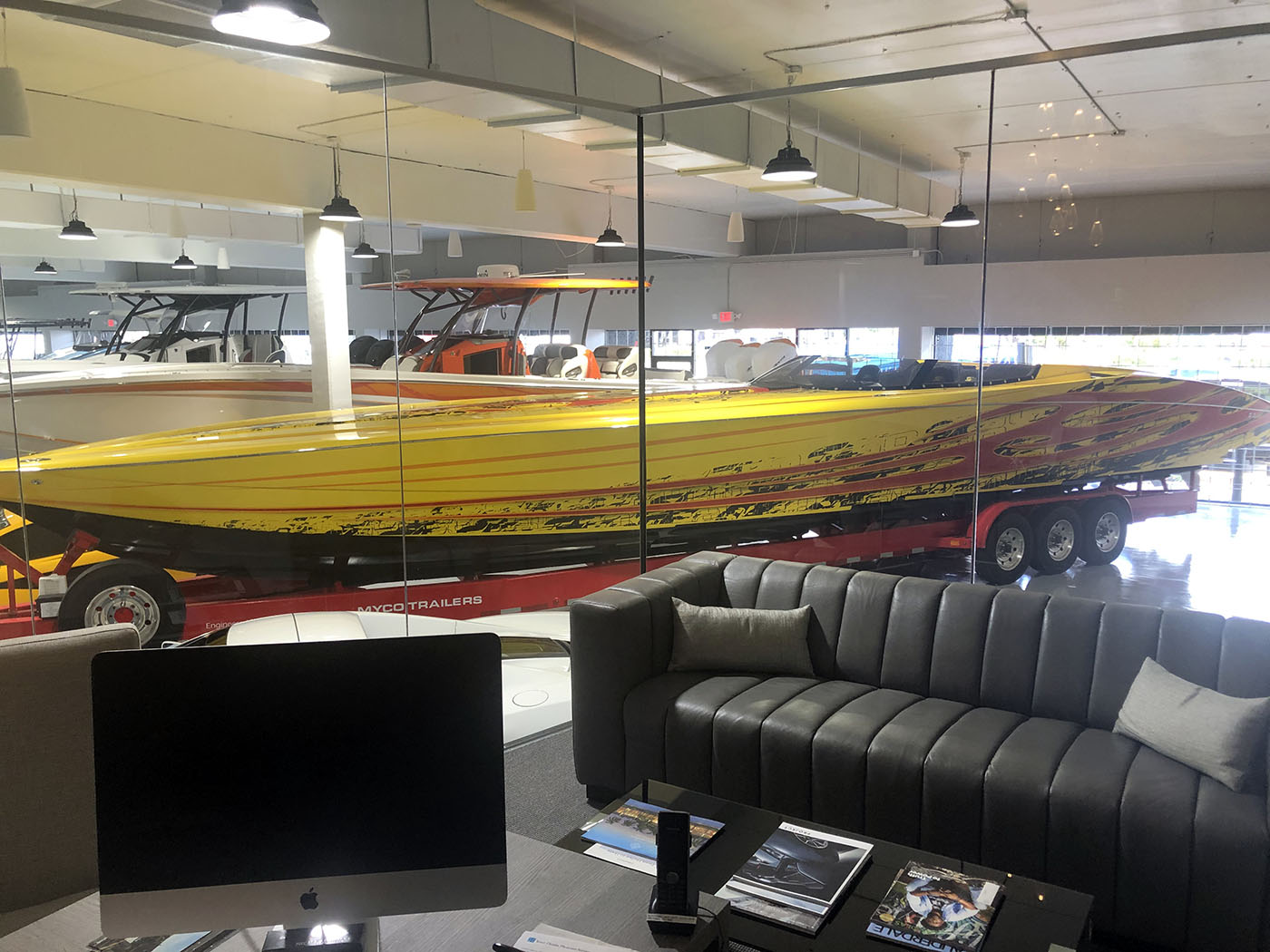 The elevated showroom office in SLT Collection has an unobstructed view of the boats and cars on the floor. Photos by Matt Trulio.

So despite that SLT Collection in Fort Lauderdale, Fla., has a wall-full of exquisitely displayed—and rigorously secured (don’t even think about it)—pre-owned timepieces from the likes of Patek Philippe, Audemars Piguet, Cartier and Rolex for sale, what I covet are the pre-owned Nor-Tech and Outerlimits performance boats, as well as the McLaren and Aston Martin exotic automobiles that take up the rest of the massive facility.

Partners in the venture and life itself, Scot Conrad and Dustin Simon—names familiar to those who have followed the marine industry since the late 1990s—started the project more than a year ago. Their over-arching goal for SLT, which stands for Sea, Land and Time, is to create a boutique experience, albeit a massive one, for aficionados of all three. 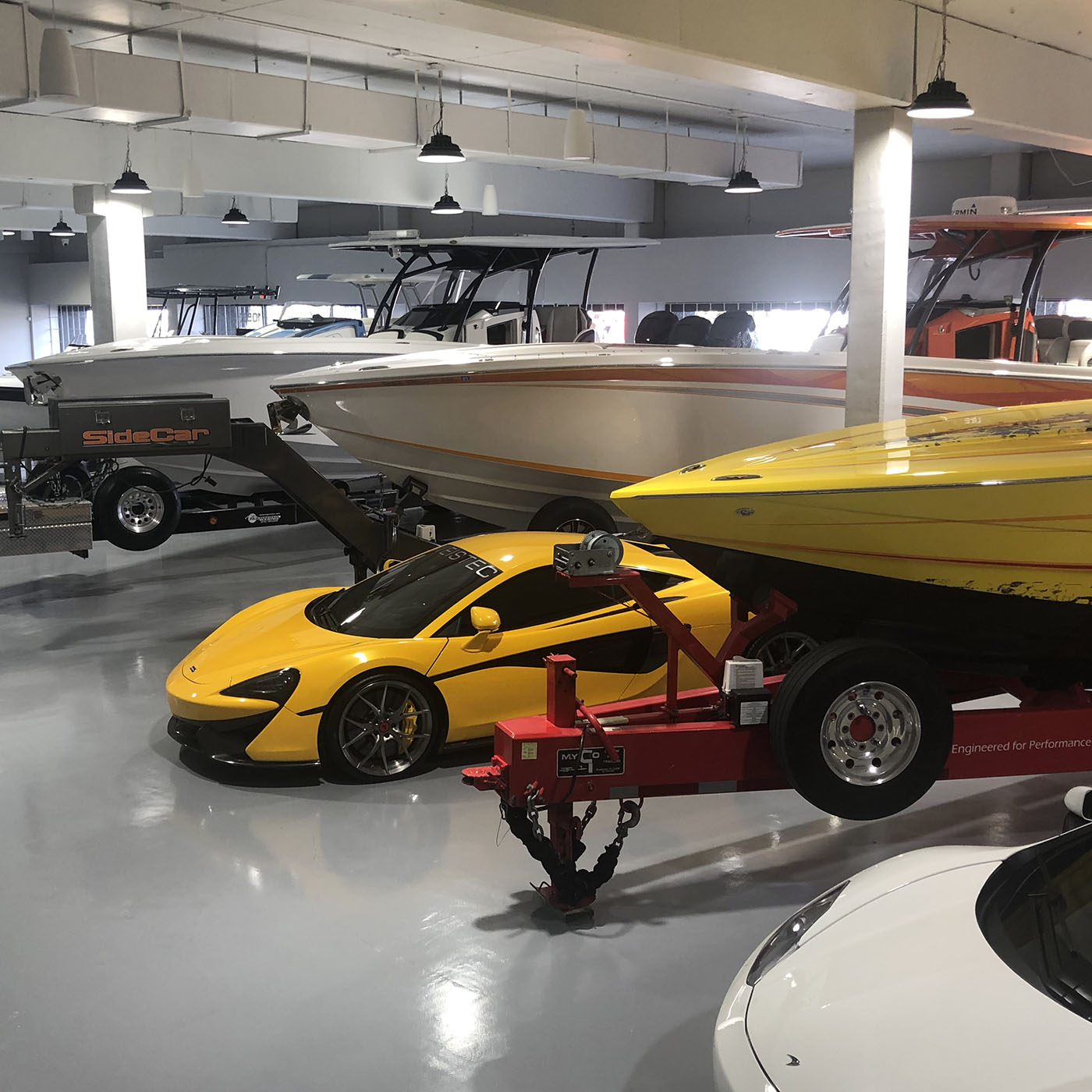 They acquired the former giant industrial-space on West Sunrise Boulevard, gutted it, and created a two-story showroom capable of holding big performance boats in two separate areas. One is for display, the other for storage. And there’s still plenty of space left over, at least in the storage area, for vehicles from sports cars to Freightliners.

The ongoing build-out will include automobile storage on the second level. To that end, Conrad and Simon are in the process of having an automobile elevator installed. Clients who store their boats and cars with SLT Collection will be able to let the staff know they’re coming and their cars will be waiting out front when desired. As for the boats, there are several nearby launch ramps clients can access after pick-up.

According to Conrad, SLT Collection also has partnered with Troy Hannon of Supreme Marine in Fort Lauderdale for service, parts and rigging and is an Airship RIB dealer. 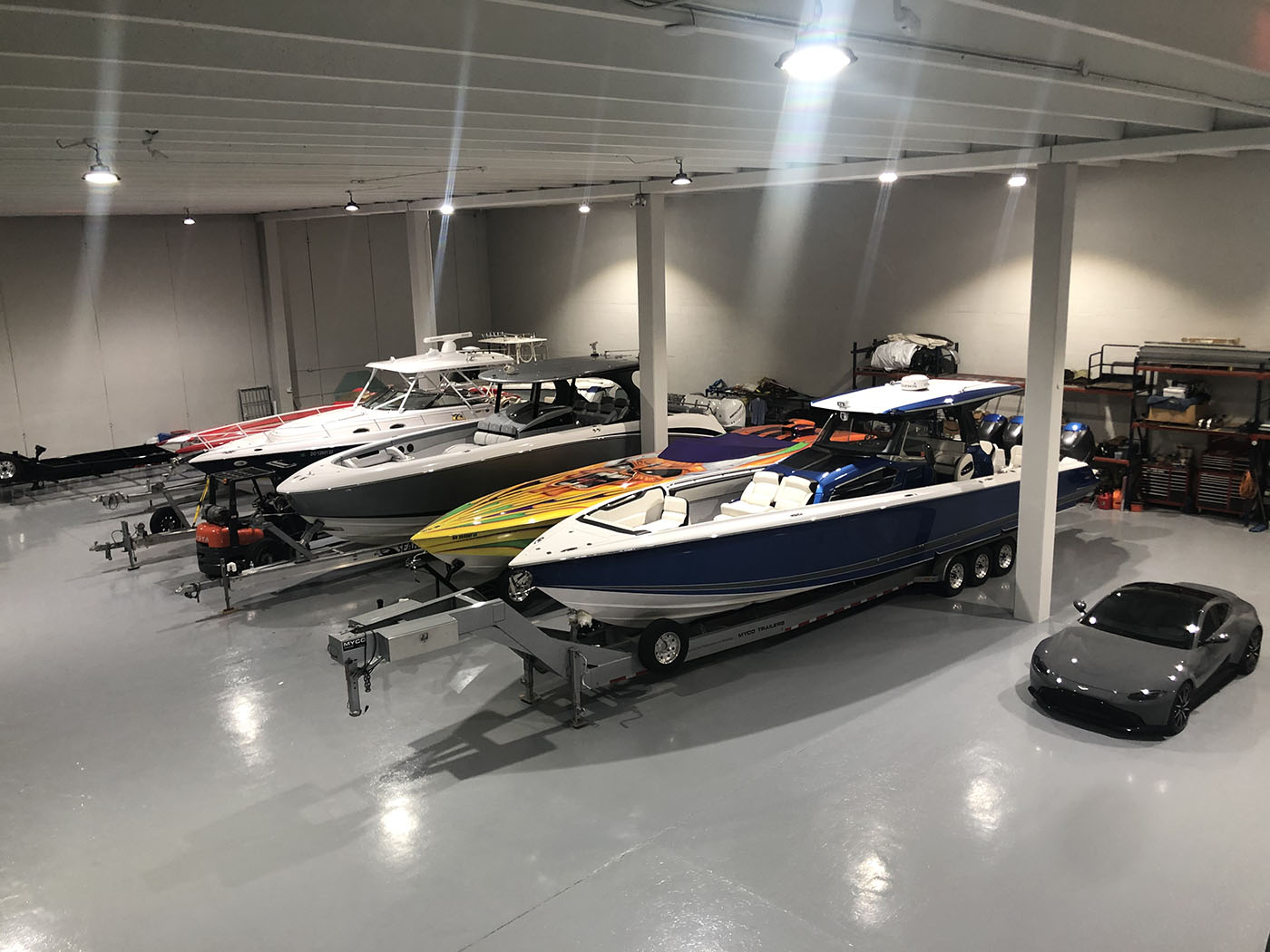 The rear of the facility is dedicated to powerboat and vehicle storage.

But all the bright, shiny objects notwithstanding, the most intriguing aspect of SLT Collection is that its business model is still in formation. When fellow offshoreonly.com columnist Jason Johnson and I met with Conrad and Simon in November 2018 in Key West, Fla., the plan was somewhat different. (An offshoot of their Watch Expo business in Newport Beach, Calif., pre-owned timepiece sales were always in the mix.)

And Conrad and Simon have no problem with that. In fact, they’re exhilarated by it.

“We’re building a lifestyle foundation,” said Conrad during our visit to SLT Collection last Wednesday in advance of the Miami International Boat Show. “It’s going to be really fun over the next couple of years to see what it becomes.”