You are at:Home»What?!?»Is The Boca Grande Fun Run Toast? 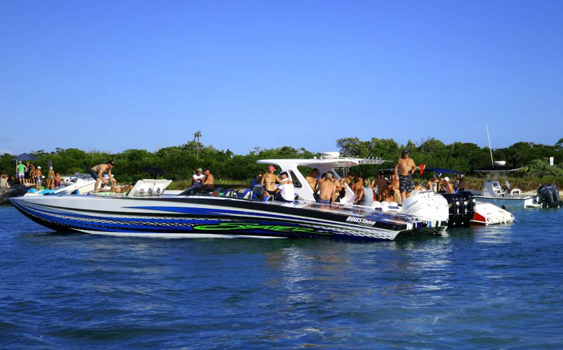 Big changes will be required for the Boca Grande Fun Run to return next November—but it’s not impossible. (Photo by Yvonne Aleman.)

Don’t get me wrong—I’m not a prude—but in the somewhat unlikely event that the Boca Grande Fun Run is part of the Florida Powerboat Club’s Key Poker Run program next year, it might be a good idea to leave the stripper pole back at the docks in Key West, Fla. Because whether you like it or not, agree with it or not, support it or not, that particular apparatus wouldn’t square with a “compatibility determination” assessment that means the difference between an official thumbs-up or thumbs-down for an event happening in the Key West National Wildlife Refuge, which is in part managed and controlled by U.S. Fish and Wildlife Service.

“The Boca Grande Key refuge was set up in 1908,” said Karen Finley, the Florida Keys Refuge manager tasked with the process of setting up and evaluating whether or not a given event is appropriate for a refuge area under agency purview. “It was set up for the protection of migratory birds, and it was one of the first areas of its kind in the country. A refuge is a place to enjoy wildlife in solitude and quiet. It’s a wilderness area. It is not a place for a party, quite frankly.

“The migratory birds are really having a hard time,” she added. “So we are trying to balance the use out there.”

It doesn’t matter whether you or I agree with Finley’s notion of “balance.” It doesn’t even matter if everyone follows every rule, especially the one about keeping everything from boats to bodies below the mean high-tide line on Boca Grande Key. Because even if no one sets foot on those pristine sands during an event, especially during a large-scale event such as the annual Fun Run there, the event might not pass “compatibility determination” muster.

Is that fair? That depends on what side of the line drawn in the sand you’re sanding on. Stu Jones of the Florida Powerboat Club sure doesn’t think so. He described himself and his club as “easy targets” for a government agency “flexing its muscle.”

Finley maintained she didn’t want the event to happen at all this year—she said she had significant concerns after last year’s Fun Boca Grande Fun Run. Jones said he addressed those concerns during the captains’ meetings for this year’s poker run, as well as in the printed guidelines in every captain’s kit.

Finley said she agreed to let the participants “police themselves” this year, but she was less than thrilled with the results. “There were anchors above the high water line—they created a path in vegetation above the high waterline,” she said. “They even had a stripper pole out there.”

Jones said he cannot be expected to control everyone in his club, much less all the non-member boat owners who showed up at the Saturday Fun Run to Boca Grande Key. He said that most of his club’s members obeyed the guidelines he laid out and were anchored and rafted off the Key, and that is well within the rules for the refuge. Jones said Finley told him his photo helicopter could not land on the beach. Finley said she told Jones no helicopter could be involved, period.

“We were told that as long as we anchored we were fine, and that’s what I told everyone in the captains’ meetings,” Jones said. “And that’s where the majority of our boats were. I told our captains, ‘I know you don’t want to hear this, but you know that pointy thing in the bow of your boat? You’re going to have to use it.’ The guy who beached his yacht? He was not with us—he wasn’t even part of group.”

To describe Jones’ current state as “hot around the collar” would do a disservice to his collar, which is close to bursting into flames at this point. But once cooled, Jones is a reasonable guy who will go out of his way to protect his interests and the interests of his club’s members, which more often than not are one in the same. And despite last Friday’s Key West Citizen story with the headline, “Refuge says no to powerboat crowds,” the fate of Boca Grande Fun Run is not completely sealed.

While Finley isn’t especially optimistic about the future of the Boca Grande Fun Run, she’s also not intractable.

“I am not trying to set up an adversarial thing,” she said. “When Mr. Jones told me he was willing to try to police this, I acquiesced and said, ‘Let’s give it a try.’ But what we saw this year and last year isn’t going to work. I don’t want to end up in a situation where we end up writing a bunch of tickets, but in this case I’m a bit forced if it happens that way again.