The Adrenaline Powerboats rendering of its ZRX 47 Carbon Series V-bottom is about as realistic as it gets.

For Mike Layton and the team at Adrenaline Powerboats in Lincolnton, Ga., years of hard work are starting to come to fruition in the form of the company’s first ZRX 47 Carbon Series V-bottom that is officially out of the mold.

Last week, Layton and company joined the hull and deck together, then took a step back to admire the all-epoxy, all-carbon infused 47-footer that was designed and assembled utilizing high-tech CAD and CNC machining processes to achieve the highest-quality components. The break in the action didn’t last long though as there is still plenty more to get done, including work on the second ZRX 47 as well as the big brother to the 47-footer, the ZRX 54.

“We’re a little behind schedule, but we’re making sure the first 47 comes together as intended,” Layton said. “I’m biased but it’s a stunning design. It’s not overly aggressive or weird looking—it has a good balance of design that’s familiar to what’s already out there yet different. We’ve also built a lot of function into it. It is definitely a supercar version of a V-bottom. 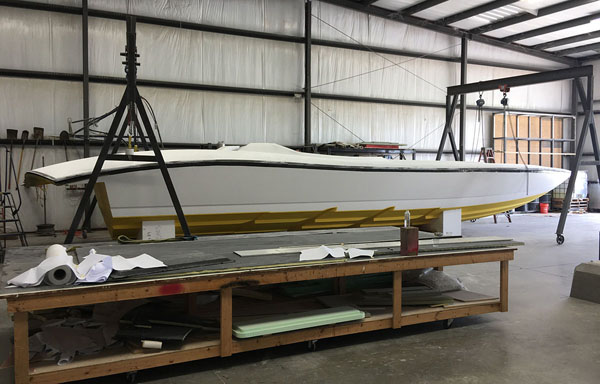 With the hull and deck complete, the stylish 47-foot V-bottom from Adrenaline is starting to come together.

“From A to Z, our design and manufacturing is as comprehensive as anything I’ve ever seen,” he added. “The shapes we are building are complex, all of the hardware is designed and machined in house—we want to build the best boats we can build. In order to do that, it has to be next-level stuff because there are a lot of great products out there. Getting the first one done just takes time.”

Luckily the customer getting the first 47-footer, which is going to be powered by twin Mercury Racing 1100 engines, has been patient. It helps that Chris Walker of SuperTruck in Augusta, Ga., understands the custom-build process and has been super involved with the ZRX 47 from the get-go.

“I can’t begin to tell you how excited I am about this boat, and I’ve never been a V-bottom guy,” said Walker, whose last new boat, Agent Provocateur (also powered with twin 1100s) was the first Mystic Powerboats C4400 catamaran from the DeLand, Fla., company. “Between Eliminator, DCB, MTI, Mystic and more, I’ve owned seven catamarans. I loved them all for a variety of reasons, but I never wanted a V-bottom until Mike told me he was thinking about building a big boat. I told him, ‘I’ll build a big boat with you.’ And it took off from there.

Thanks to a state-of-the-art 5-axis CNC machine for rapid prototyping and creating tooling, Adrenaline’s molds are exceptional.

“Mike did some work on my cats before since his shop is pretty close, so I knew he was honest, had integrity and his workmanship quality was second to none,” Walker continued. “I’ve been to a lot of boat shops over the years and I don’t think I’ve seen one as state of the art as Adrenaline. We spent a few months designing and engineering everything you can think of in the boat. Mike’s design and manufacturing process is incredible.”

Layton said as they got caught up in the production of the first ZRX 47, Walker suggested doing an outboard version of the 47-footer, and that got the ball rolling on boat No. 2, which is in the mold and set to be powered by four Mercury Racing Verado 400R engines. That obviously took some additional design work, but Layton said he only had to make a couple of extra molds for the cockpit and the transom.

Thanks to the advanced level of computer-aided manufacturing that takes place at Adrenaline along with an in-house state-of-the-art 5-axis CNC machine for rapid prototyping and final tooling projects, Layton and his team were able to manipulate the designs of the inboard boat to incorporate the outboard configuration as well. They have also designed much of the tooling so that it fits both the ZRX 47 and the ZRX 54. He said that wasn’t easy, but that it would be nearly impossible without the technology he has at his disposal. 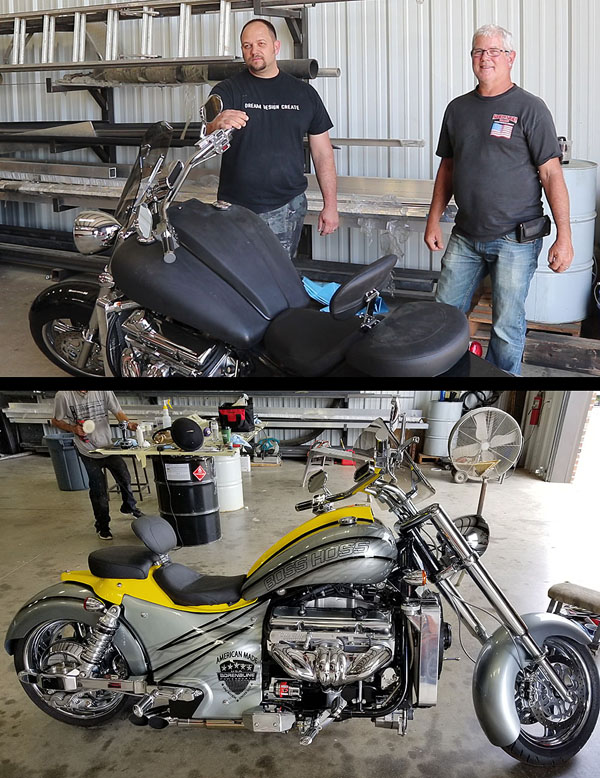 Mike Layton, left, and Chris Walker (above) stand beside Walker’s Boss Hoss motorcycle, which Layton painted so that it will match Walker’s new ZRX 47.

So would ensuring that his boats are built to the highest quality standards and tolerances.

“The boat’s design is over the top,” Walker said. “From the comfortable cabin, massive entertainment system and unique rear hatch that looks like something out of ‘Star Wars’ to the custom anchor locker, designated cooler storage and theater-style cockpit seating, the boat has it all. I can’t wait to see the outboard one, too. It will hold 10 people and still run 100 mph. How cool will that be?”

When asked what motivates him to want to create such an exceptional boat, Layton’s answer was simple.

“I want to build the most irresistible boats on the water, period,” said Layton, who also builds a 29- and 32-foot V-bottom. “I’ve always been a fan of high-performance boats and I admire many of the boat companies out there. In fact, they have inspired me to do my own version of something out of this world. I really enjoy trying to take what’s in my head and create the 3D models and images to represent what it is that we set out to build.

“Some people have asked who is Mike Layton or what is Adrenaline,” he continued. “The best way I can answer that is to make what we are doing resonate loudly and go so far over the top that our products speak for themselves.”

Based on Walker’s opinion and the work in progress at Adrenaline Powerboats, Layton and company are bound to do just that.