The variety of boats currently being worked on at Waves and Wheels is pretty impressive.

Although we don’t get to catch up as often as we’d like to or used to because of schedules that seem to keep getting busier, Justin Wagner, the founder of Waves and Wheels in Osage Beach, Mo., and I try to stay in touch on a regular basis. Such was the case last Friday morning when Wagner called me just as I pulled up to the park to take my dog Uno for a walk.

So, in my always-ready-to-work mode, I pulled out my computer, jumped over to the passenger seat and started jotting down some notes since I was still on hands-free mode, and he started rattling off project after project of boats sitting in the service bays of the shop addition Waves and Wheels completed earlier this year.

Not only was my conversation with Wagner enlightening as to the variety of projects he has going on in his shop and the growth he’s experiencing with his Bluave Marine Audio equipment line, but it was fun because we connected via Facetime for most of it, which enabled him to walk me through the facility for a look at the projects instead of him just describing them over the phone and texting me images.

I have to admit—although I was just sitting in my car so Justin view’s was nothing special (see screenshot below)—getting carried around the shop and saying hello to his crew from 1,500 miles away was kind of cool. For Wagner, Facetime has become a go-to application in his business. In fact, he estimates he’s saved $10,000 a year in flights not having to go troubleshoot something or guide an install. He also said it helps tremendously with the customer service side since he can show live progress of any project to any customer anywhere in the world. 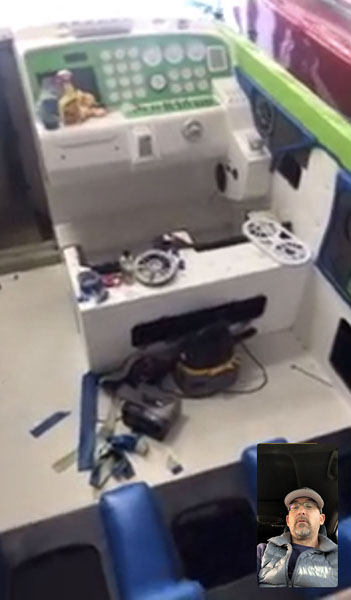 Being able to show and discuss project progress with his customers via Facetime has been a major asset to Wagner and his team.

In terms of projects on the Waves and Wheels side, Wagner, who recently bought a marina on Lake of the Ozarks that he’s renovating and relocating to in the spring, said the company has completed and booked more rebuilds—his business has expanded well beyond stereo systems—than ever before. Although he stressed he still has availability to get projects finished in time for next season. He credits that to the expanded service area, which has allowed for four times as many boats inside and larger spaces for the upholstery and fabrication shops, and to his experienced team, which he said has developed into an extremely efficient machine.

“Josh and I were just talking about how much more challenging it was to do anything in the old shop,” Wagner said. “I’m proud of this team and how everyone here has grown in terms of quality, creativity and efficiency. “We are always trying to improve on what we do, always shooting for perfection. We’ve done it with our product development, we’ve done it with our rebuild projects and we’re going to continue to do it.”

During the Facetime walk-through of the shop, I was amazed to see Greg Dutka’s Sunsation Boats 32 SS Dominator, which last I knew was in Hawaii. Wagner and his team are currently redoing the dash, upholstery and entertainment system, and adding a cool LED kit to Dutka’s 32-footer. They recently wrapped up a neat Sunsation F4 project, which was featured in the video above produced by Shawn Kober of Big Planet Media.

I was also impressed with the variety of boats at Waves and Wheels. Not only were there a few Cigarette Racing Team V-bottoms, an Outerlimits 47 GTX, a Fountain, a Nor-Tech, a pontoon, a couple of PWC and a couple of trucks, there was even a Dragon Powerboats V-bottom getting some work done to it.

Not only are there Skater and Nor-Tech catamarans sitting next to V-bottoms from Fountain, Cigarette and Sunsation, there is a rare V-bottom from Dragon Powerboats getting work done by the team at Waves and Wheels.

Along with overseeing the projects and managing the new marina makeover, Wagner is wrapping up new mobile Bluave Marine Audio demo displays for dealers and retailers as well as working on the 46-foot Skater Powerboats catamaran he purchased two summers ago. Actually, the boat is currently at Maryland Offshore Performance Marine Center where Andy Imhof and his team are handling some fiberglass repairs before setting out to install a Boat Customs windshield conversion kit, paint the massive catamaran and complete the rigging of the boat’s Sterling Performance engines.

Whether it’s via email, a phone call or Facetime, it’s always nice catching up with Wagner. Although poor Uno—our “recently added to the family” French bulldog—had to sit through it all before getting his much-deserved walk.